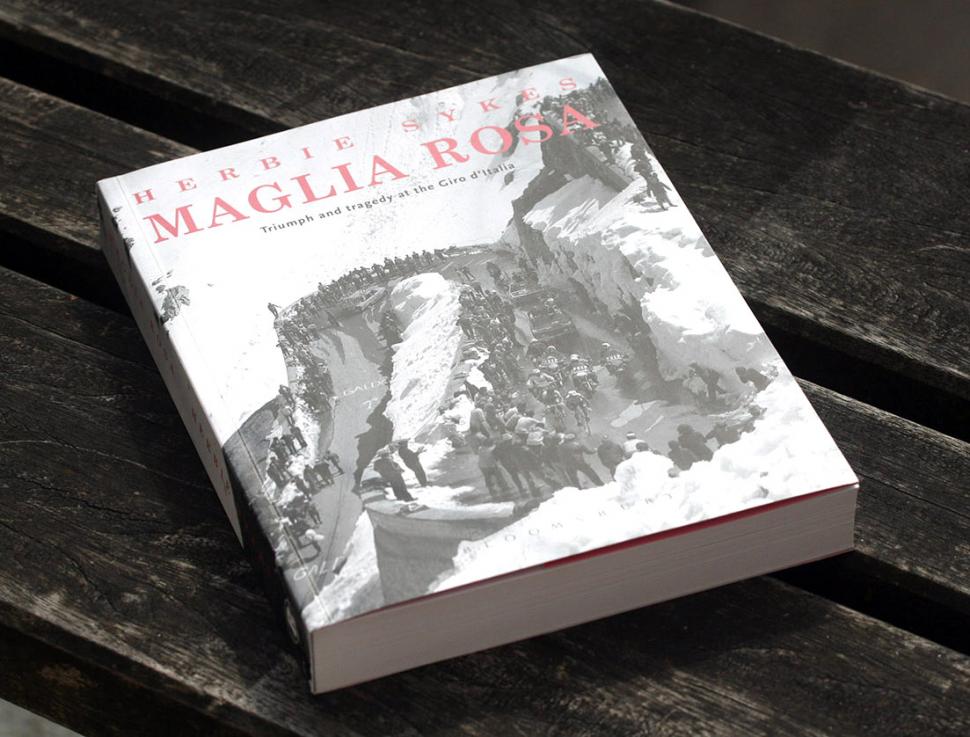 8
10
Excellent and as compelling as the race itself… shame there's no index though
Weight:
1,300g
Contact:
www.rouleur.cc, also available from amazon.co.uk and all good book stores

The British writer Herbie Sykes has lived in Turin for a few years now. He's absorbed all things Italian and after his excellent 'The Eagle of Canavese', (about the little known double Giro winner Franco Balmamion), Sykes has been given the task by Rouleur of writing the first full English language history of the Giro d'Italia. It's an entertaining and intelligent narrative that explores the chronology of the Giro with it's winners and losers - but also the national psyche of Italy itself throughout the 20th century and on in to the 21st.

Over the years Le Tour has grown into a marketing tool to project a version of France to the world - a sometimes exciting but generally carefully controlled exercise in class and grace. In contrast the Giro has always been most important for the home fans. It's a celebration of Italy's passion, tradition, pride, unpredictability and the revolving mirror of honour and what Italians might call gamesmanship but what us Anglo Saxons call chicanery.

Of course from the very start the story is that of big characters. The first major star was Guiseppe Gerbi 'The Red Devil'. Sykes describes him as 'a destructive, wayward wrong'un... his father handed him a bike to keep him out of trouble' and judging from his photograph Gerbi looks like a truly troubling opponent. Even with nails in your back pocket to scatter in your breakaway or bribe money to offer opponents (both ploys of Gerbi) you would need to be tough as, much like the Tour, the Giro's early format was an exercise in masochism.

According to Sykes 1914 saw 'the most sadistic giro of all' with it's 3,162 kilometres squeezed into just 8 stages with an average stage length of 'a biblical 396 kilometres' undertaken, of course, on single speed bikes weighing 15kg. Sixty percent of the riders failed to complete the first stage and stage eight encountered a blizzard so thick that the leading rider, 58 minutes ahead of the bunch, simply vanished in the whirling snow - to be discovered three days later sheltering in a barn with a fever. In these days of team cars and fresh wheels it's chastening to learn just how many major efforts were thwarted by punctures on the dirt roads. One poor soul crested a major climb minutes in the lead only to have three successive punctures on the descent which puts Andy Schleck's 2011 TDF 'chain gate' incident into perspective.

Of course tales of attrition and the major stars are standard fare for grand tour histories. Certainly all the greats are covered as the race wends it way through the century: Brunero, Binda, Bartali, Coppi, Gimondi, Moser.. but Sykes has sections on and interviews with forgotten heroes like Tino Colletti and Italo Zilioli who clear up myths and reflect on the failures as well as successes of the Giro's rich history.

The accompanying photographs are also superb. You will never see more raffish and stylish riders than Beppe Saronni and Felice Gimondi. Style is all important to Italians as Sykes explained an interview with Podium cafe in 2011. 'Italy it goes without saying is a beautiful eclectic country. Though railing endlessly against the state is evidently a national obsession, the Italians, unlike say the English, in general retain a profound attachment to and pride in their Bel Paese, their 'beautiful land'. In Italy style - or at least the appearance of style - invariably trumps crude, prosaic substance. This overly developed sense of the aesthetic is made manifest not only in the ways Italians dress, present and behave themselves, but in the food they eat, the products they design, in the municipal buildings and cities they inhabit.'

Indeed Sykes's description of the horror Italians felt when the Flemish cyclist Pollentier scraped the 1977 Giro is palpable. It was a distaste not so much for the nationality of the winner (The American Andy Hampsten won with such guts in 1988 that he'll never have to buy his own drink in Italy ever again) but the winner's lack of charm and panache. 'Little, bald, pasty and monosyllabic (albeit in five different languages) Pollentier had about him the air not of a thoroughbred racing cyclist but rather that of a swingeing primary school janitor or a pedantic bus conductor... Italy was incredulous. Fair enough, it had been one thing for Gimondi, Zilioli and the like to be beaten by the great Merckx, quite another entirely for a Flemish water -carrier like Pollentier to humiliate the new pin up boys of Italian cycling."

The Italians haven't been humiliated very often it has to be said. Merckx had a very strange drug incident when his grip on the Giro became bad for business but Hinault spread his three wins over 6 years which appeased the Tifosi. Although, of course, I don't doubt even the Tifosi would've thought twice before messing with The Badger dressed in pink. You will flip the page quickly when you come across the photo of Hinault in the Maglia Rosa sporting a glare on his face that would freeze Mt Etna. Italian riders would call a truce in trying to nobble each other only as long as it took to nobble any outsider with the temerity to cross the alps and try for the pink jersey. It's reminiscent of the scene in 'The Italian job' when Charlie Croker and his gang meet some 'gentlemen' on a mountain road and lose their lovely Jaguars over the cliff - except with drugs and dirty tricks taking the place of the digger. For many years primarily a national race with plenty of national riders spread over trade teams, 'Italia' would usually come before your team.

Conversely, from it's start in 1909 the Giro has represented a country that has never truly been unified; a rich North versus a poor South and both with a healthy disinclination to obey Rome in the middle. After years of banking corruption and tax avoidance under the rule of the clown prince Berlusconi it's easy to forget that these are relatively prosperous times for Italy. For most of the 20th century through natural disaster (1907 saw an earthquake and tsunami at Messina which claimed 100,000 lives.), poverty, war and political strife Italy was a basket case lurching from one crisis to another.

The Giro had to pick itself up and then bolster Italy's national sense of pride after the First World War, interference by Mussolini and the mental and material devastation of the Second World War. Collective pride is fundamental to Italy however disparate the regions may appear in relation to each other. Unfortunately the success that engenders pride in Italian cycling has long meant pharmaceuticals and these, combined with twisting the race itself to favour Italians riders, has meant a drop in relevance for the Giro on the international circuit it is only now just beginning to address.

The first edition of 'The Maglia Rosa' was published in May 2011 as that tragic Giro wended it's way to it's embarrassing conclusion. At the time of writing the 2013 Giro is halfway through. With the battle against doping still progressing but seemingly producing clean Pro Tour winners for the first time since...er, well ever - and a new race director finally finding his feet this year's Giro has the action and choice of scenery that are producing a race that the 2013 Tour may well be hard pressed to match. Even then the Giro still won't be out of the woods.

Sykes has included new closing chapters for the second edition which discuss where the Giro is now heading. The UCI, in a scenario reminiscent of the 1994 World Cup when the USA asked why football matches couldn't be spilt into 'four quarters' to suit the sponsors has made ridiculous suggestions (with Sky television eyeing future rights no doubt) to cut both the Giro and the Vuelta to two weeks each to accommodate new lucrative markets on far flung continents within the new and expanding Pro Tour calendar. This will hopefully fail.

Wild, unkept and unpredictable the Giro d' Italia is the Pyrenees to the Tour de France's Alps. The Italians need it and it seems that we need it too. Sykes is optimistic that the Giro will flourish. 'Through it's frequent peaks and troughs it prevails. It will continue to do so because it remains by a distance the most beautiful, and the most captivating, of cycling's great stage races.... Try, at least once in your life, to experience it for yourself." . Rouleur call Syke's book the 'definitive' guide to the Giro d'Italia. I agree with them although I also have to admit that I haven't read either volume of Bill and Carol McGann's also critically acclaimed The Story of the Giro d'Italia: A Year-by-Year History of the Tour of Italy.

Excellent and compelling like the race it describes, an index would make it nigh on perfect

Like me if your knowledge of the Giro was scanty this will turn you into a proper know-all. If you think you know it all already from reading accounts in the original Italian then this will still be a useful crammer - and you need to stop drinking coffee and get out more.

Given it's quality I can see it going to a third edition but I have to get on my old hobby horse and moan about a lack of index. There is a very useful statistics list at the back and the book is laid out well enough but Rouleur should consider that one day in the near future books like these might form part of academic course and an index is an essential part of a serious tome like this - the book's spare wheel. Like a spare wheel it's very annoying to find it not there in the rare occasions you need it.

If you're looking for post-lockdown riding inspiration, this book delivers it in spades