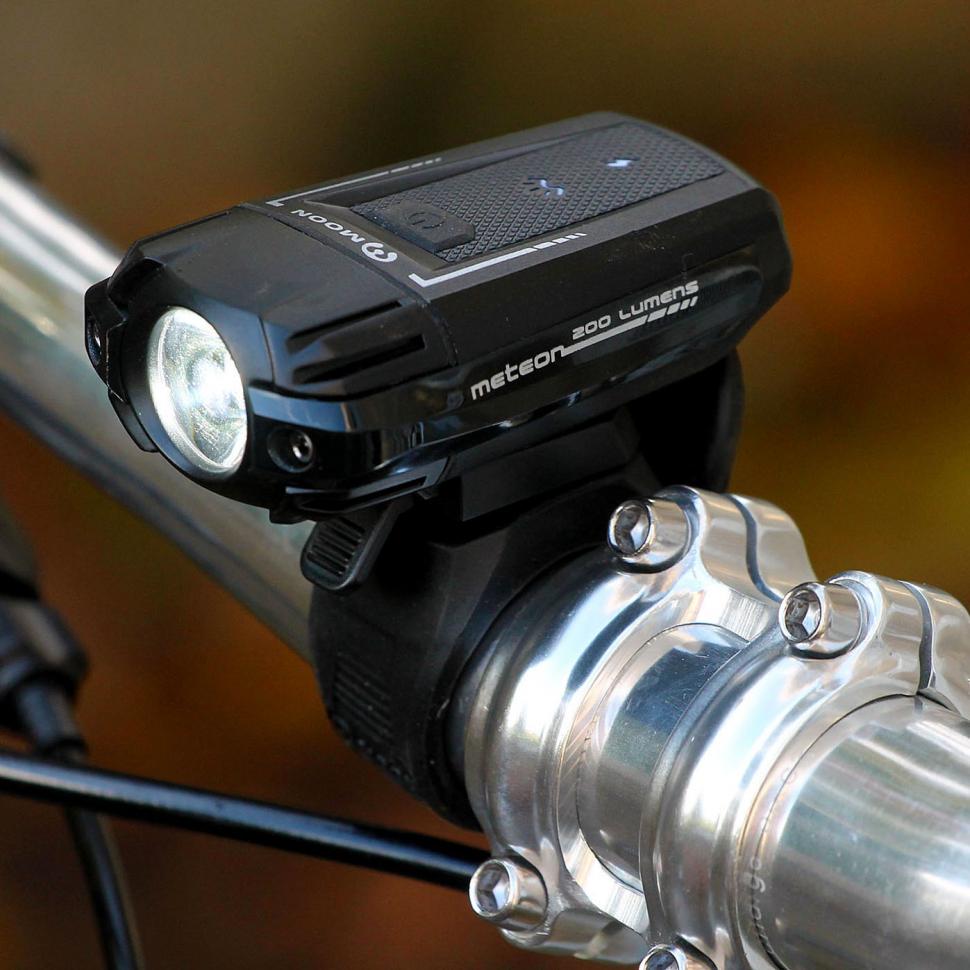 9
10
A cracking little light that punches well above its weight and price
Weight:
65g
Contact:
www.raleigh.co.uk
How we test

The Moon Meteor front light might only have half the output of the Moon XP500 we reviewed recently, but it punches well above its weight and costs half as much.

First impressions are that this is a very smart little light. It's dinky wee but looks purposeful and business-like. According to Moon it will kick out 200 lumens for 1 hour and 50 minutes, which is quite impressive for such a small unit.

Recharging is via a USB port on the back. The cover is a basic rubber plug, very similar to the one on the Moon Shield rear light I tested last year. I had my misgivings about how robust it would be, but after a year of my hamfisted abuse it is still attached to the light. It also seals the port quite effectively from water. A full recharge from my desk PC took about two hours.

I like rubber straps for light brackets, but the one Moon uses is particularly good. It feels robust, I never had a problem fitting it to my bars and the light is small enough that the strap easily keeps it in place. The bracket also allows some rotation, via a series of pre-set clicks. If you're trying to compensate for a very slightly angled handlebar then you might struggle to get an ideal setting but most people will have no problem. You also get a helmet mount included in the price and I suspect that our muddy tyred chums will find this is a great little supplementary light for off-road excursions.

Where the Meteor really scores is in the way it uses its 200 lumen output. As a test I stood in the garden and fired up both the Meteor and the XP500. Although there's a 300 (count 'em) lumen difference I swear the Meteor was no less bright, it just has a narrower spread of light. On the road that translates as a wide and well diffused patch of light to ride by but with enough spill that the sides of the road are sufficiently well lit. It's a very reassuring light, unlike the Niterider Mako 200 (review on the way) which has the same claimed output but a very narrow central spot (dimmer than the Meteor) and no peripheral light. You wouldn't want to be tackling full-speed twisty descents or gnarly off-road trails with it, but pitch black Devon lanes were no problem at all. For a sub-£50 light it's really very good indeed.

With such a small light you wouldn't expect a huge runtime and the 1:50 on full is respectable rather than amazing. It's more than enough for most commutes though and the lower settings will do you just fine for anything less than unlit lanes. There is a useful gauge on the back of the light which gives you a good idea how much juice there is left. I bench-tested the light and got a green light after 35 minutes, a flashing red after 75 and off after 108. Mind you, on the commute home the green seemed to come on quite a bit quicker than that, so temperature might affect this light more than most.

The optics are not the only smart feature of this light. Unlike the XP500, the Meteor doesn't cycle through 'off' as you switch through the settings, one of my personal bugbears with any light. Not only that, the Meteor is clever enough to switch on in two different modes. Short press for Overdrive, High and Standard, long press for the flashing modes (Flashing, Insanely Horrible Strobe That Should Be Illegal and SOS) each one communicated by a little illuminated icon on the top. For a very modestly priced light, it's rather good and makes the much more expensive XP500 look a bit old-fashioned.

Are there any downsides to the Meteor? Well, I didn't like the button much. It's quite flat and has a stiff, but hard to locate action even with bare hands. In the dark and with gloves on it's a pain, although I tended to run the light in Overdrive at all times. If I was switching between settings during the course of the ride I'd probably be cursing though. There is no side illumination at all which might bother some people, but on a light like this I wouldn't be too critical.

Overall I really, really liked this light. It's surprisingly powerful, cheap, intelligently thought out ('orrid button aside) and very nice to ride with.

A cracking little light that punches well above its weight and price.

Moon are coy and don't say much. I would say that it's probably aimed at commuters who want a bit more power than a 'be seen' light but aren't fussed about huge run-times or enough power to fry an egg at fifty paces.

Moon's version of the rubbery strap works better than most and the light is small enough not to move about.

1:50 on full isn't massive, but this is a commuter+ light, not one for all-night off-road excursions or audaxes. It's also cheap and very small. USB and short recharge time makes it a practical commuter option.

Really makes the most of its 200 lumens. This is an excellent light for the price and size.

Robust construction but the battery can't be replaced, which is a shame.

A nice choice for the weight-weenies.

Excellent value at under £50.

Smart optics make the most of the light on offer and smart electronics keep you well informed about battery life.

Small button is hard to locate and operate.

A really excellent light for the money.