The Boardman Urban Pro Ltd is a very capable fast commuter with a high spec level and a responsive ride. It's light and comfortable enough for much, much longer outings than just the trip to work and would be a great sportive or Audax tool for riders who prefer the flats to the drops. Aside from a few niggles, it comes highly recommended.

The Urban Pro Ltd is a new bike in Boardman's range for 2009, sitting above the other hybrids and nudging under the £1k bike to work cap. For the extra £200 you'll shell out over the Pro there's plenty of upgrades. For a start it's a new frame: A super butted Aluminium offering with neatly filled and rounded welds. We thought it was Carbon the first time we saw it, and it's definitely a great looking bike. Hanging off it is a SRAM/Truvativ drivetrain, Ritchey OCR wheels and a full ship's complement of the excellent Ritchey Pro finishing kit. A set of Carbon-levered Avid Elixir R brakes take care of the stopping. 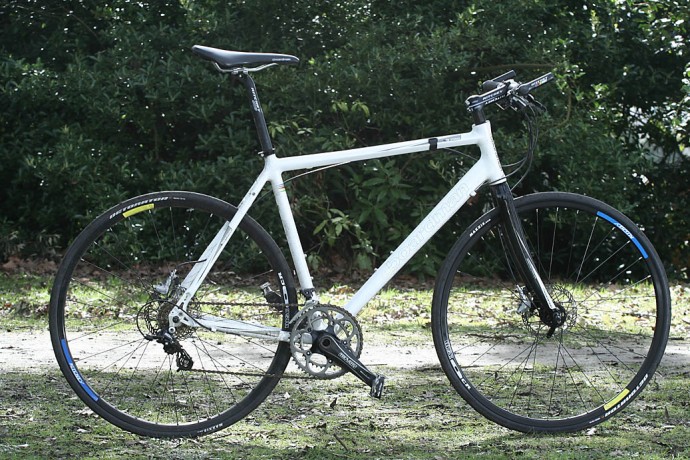 That's a very decent spec for your grand, and the result is a very light bike indeed, the lightest disc equipped bike, at 9.4kg (20.7lb), that we've seen thus far. The light weight of the bike is evident from the off. It feels perhaps a touch less quick than you'd expect as the wheels and tyres aren't the lightest, but certainly compares favourably with other £1k hybrids I've ridden, some of which sneak under the 20lb mark.

The frame is stiff but not at the expense of the ride, which is excellent. There's a bit of spring when you put the power down, not noticeable flex but just a bit of liveliness which is very welcome on a bike of this type. The large air chambers of the Maxxis Detonator tyres help with the comfort levels, and the saddle isn't bad either although I'd expect to see a carbon 'post on a bike costing a grand. 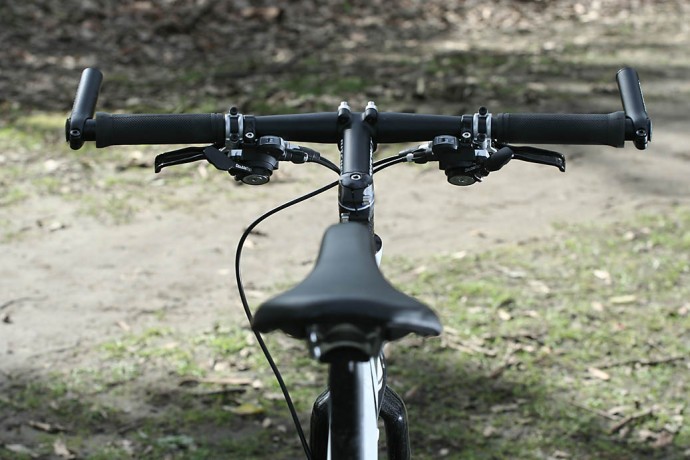 Climbing on the Urban Pro Ltd is a fuss-free affair, with the low overall weight mitigating against the slight weight penalty of the discs. The Ritchey WCS bar ends add negligible weight but a useful extra hand position. Going downhill the neutral steering means that the bike is well planted but I wasn't that impressed with the Avid Elixir R brakes – they're short on modulation on a bike of this type meaning that you have to be careful when you're braking, especially when you're out of the saddle. They're certainly no match for Shimano's new SLX units in terms of feel, Carbon levers or no.

The Urban Pro Ltd is best on longer rides, not because it isn't well behaved on a short commute but rather because it's such an assured ride that you'll be itching to widen your horizons a bit. The position is more stretched than some hybrids meaning that it's a slightly faster position which might not suit if you're commuting with a backpack. If you're looking for a machine to eat a few miles at the weekend or maybe try the odd Sportive or Audax than it's certainly a viable alternative to a fast tourer. 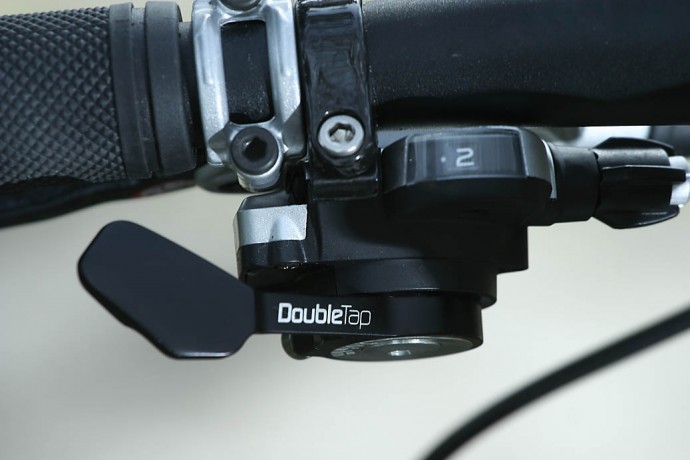 The drivetrain was with one major exception (see below) very well behaved, and the SRAM Double Tap flat bar shifters are brilliant. They use a similar action to the STI levers; although I like the road groupsets I think this is the best application of the system. They have a great feel and although they take some getting used to it's second nature after a few rides. The only criticism I'd make is that the release trigger is a bit light, so sometimes you can nudge the chain down a cog if your thumb is resting on the paddle and you hit a bump. 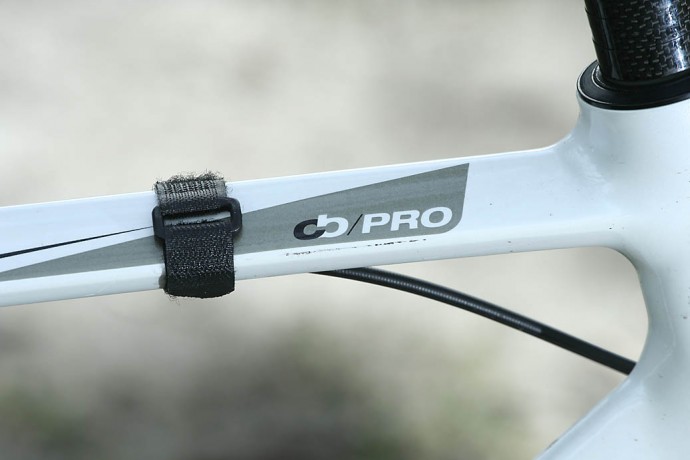 We had a few niggles with our test bike, the most serious being a loose bolt in the Truvativ Rouleur crankset that worked itself out after about 100 miles. The result was a bent inner chainring and a big scratch on the chainstay where the chainring rubbed before I worked out what the odd noise was. It's not something that I'd necessarily blame Boardman for but I'd be seriously hacked off if I'd paid out of my own pocket. Less serious but also annoying is the fact that the disc brake cable clips have all gone missing. I've replaced them with Velcro straps, but the clips really need to be stronger. There's no sign of the brake judder that plagued the 2008 bikes though, which is possibly down to the redesigned stays.

There's much to like about the Urban Pro Ltd, most importantly the fact that the excellent frame gives a lovely ride, and you're getting a lot of quality kit for your money. It's not without its faults but it's a versatile machine over any distance, and well worth a look.

The Urban Pro Ltd is a lightweight fast commuter that tips the scales at only 20.6lb, so it's a super lightweight for a disc-equipped bike. For urban commutes to anything up t a century ride.

Very nicely finished triple butted frame, the filled welds are reminiscent of the Cannondale frames of old. The finish is smooth and tough.

the 61.5cm effective top tube makes it more stretched out than some of its rivals for a slightly lower position. 73/73 angles.

The ride quality is generally excellent, the frame is more lively than most hybrids and the wheel and 28mm tyre combo smooth out the bumps too

Everything felt sturdy and there's no discernible flex

Power transfer is very good, there's a bit of spring but it's a nice feeling bike to put the hammer down on.

How would you describe the steering? Was it lively, neutral or unresponsive? neutral

The bike is very well behaved, best on longer rides where the lower position and neutral handling combine with the light weight to make it a capable cruiser

Did you enjoy riding the bike? Yes, shame about the minor niggles

Would you consider buying the bike? Yes, it's a good performer for the money 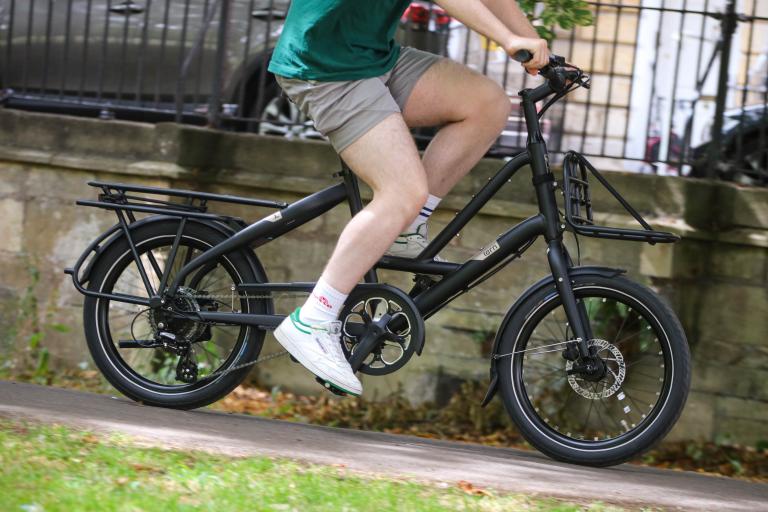 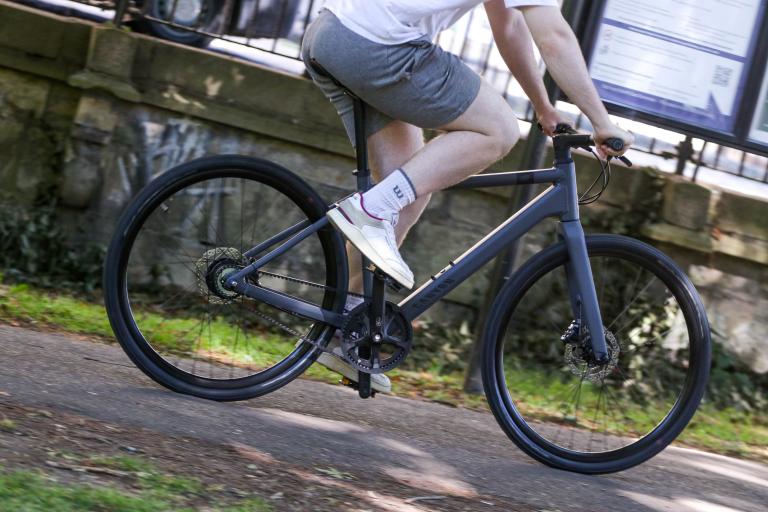 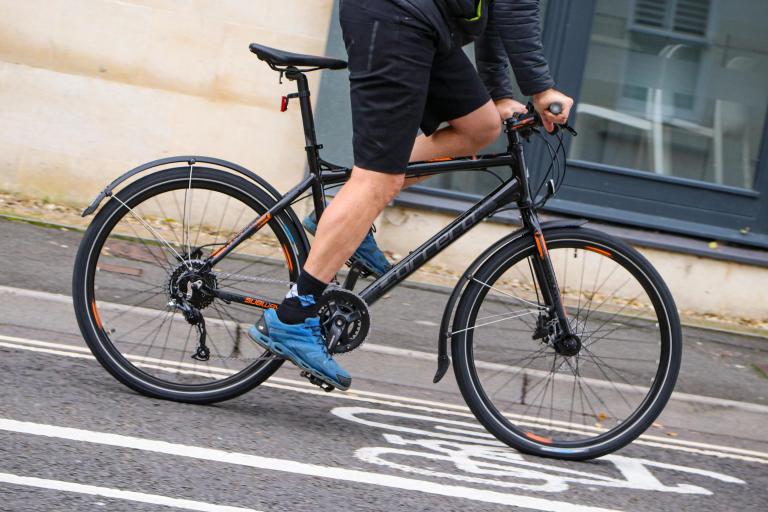 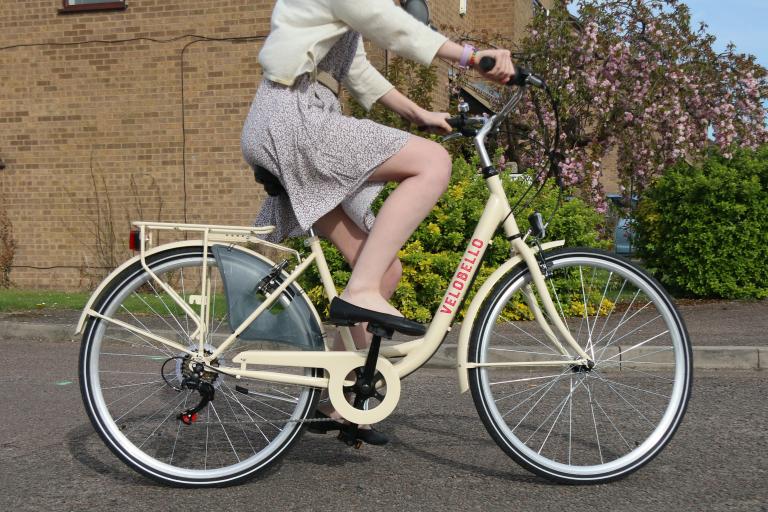