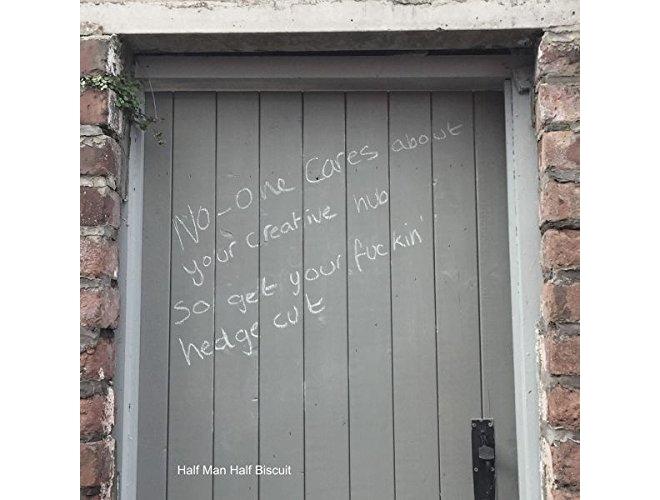 Half Man Half Biscuit: No One Cares About Your Creative Hub So Get Your Fuckin' Hedge Cut

9
10
Excellent collection of songs from the man with the lilac Harry Quinn
Weight:
89g
Contact:
new.probeplus-store.co.uk
How we test

No One Cares About Your Creative Hub so Get Your Fuckin' Hedge Cut is the best Half Man Half Biscuit in years. Okay, HMHB not being exactly prolific, it's also their only album in years, but it nevertheless sees Nigel Blackwell and the boys in top form with a collection of great tunes combined with Blackwell's sardonic but never cynical take on everyday life.

Cons: People who don't like this sort of thing won't like it, but it even has a song for them (Bladderwrack Allowance)

Half Man Half Biscuit songwriter and main man Nigel Blackwell has almost certainly written more songs about cycling than anyone else in rock and roll (or however else you want to characterise the oeuvre of the band John Peel called a national treasure and Andy Kershaw described as 'England's greatest folk band').

The arrival of a new Half Man Half Biscuit album is therefore cause for celebration, partly to see whether Blackwell's deep love of cycling has popped up in his lyrics this time, but mostly for a new dose of the band's genre-hopping joyous racket and its contrast with Blackwell's lyrics: often snarky to the point of biting, laden with cultural references, never, ever dull.

And so it is with 'No One Cares About Your Creative Hub so Get Your Fuckin' Hedge Cut', the first proper Half Man Half Biscuit album since 2014's Urge for Offal.

In contrast to that rather downbeat outing, the music on 'No One Cares About Your Creative Hub so Get Your Fuckin' Hedge Cut' bounces along with an energy I'd call youthful if I didn't know Blackwell was a couple of years older than me.

It's a cheerful, tuneful collection, though thankfully it's as lyrically sharp as ever. Like the Chatteris Town Hall Band CD, it's a grower. In a week of playing it on heavy rotation I've gone from 'this is really quite good' to 'bloody hell this is a damn good album'. I haven't felt like that about a record since The Hold Steady's 'Stay Positive'.

Standout tracks on the album (which I'm going to call Creative Hub because I can't be bothered to cut and paste the full name every time) include Man Of Constant Sorrow (With A Garage In Constant Use), a touching portrait of one of those grumpy neighbours everyone had growing up, with 'nothing for you to borrow/And a mastiff in the back running loose'. Yet a peek into his house reveals 'ultimate loneliness, absolute blue' while the music evokes various versions of the original American folk song, without actually sounding much like them.

Blackwell's greatest ire is aimed at the cargo cult aspirationals who pick up the trappings of a culture without understanding its heart. His protagonists in 'Every Time A Bell Rings' dream of running the creative hub of the album's title. 'He stays in the car leafing through a high-end coffee bean catalog/Their dream is to open up a roastery in the Keswick area' Blackwell deadpans before letting us know that this character is a MAMIL who 'got a Boardman bike on the Cycle to Work scheme ... Started watching the Tour de France highlights on ITV Four/Worshipped at the altar of Wiggo and Froomedog/Goes out every Sunday in full Sky replica kit'. Blackwell's advice is blunt: 'Stop analysing Strava/Cut your hedge.' I feel better about being a Strava refusenik now (though can't-be-arsednik might be more accurate, and my hedge still needs cutting).

Renfield's Afoot is a punk-rock howl of middle-aged defiance. 'I'll be going on any-time-I-like walks' yells Blackwell in response to an attempt to organise a bat walk in Wirral's Royden Park, while 'Knobheads on Quiz Shows' is a full artillery barrage aimed at people who go on quiz shows without any trace of general knowledge. 'What possessed you to apply/Did your friends with good advice implode?' he demands.

Walking, hiking, scrambling and the outdoors in general is also a recurring Blackwell theme. Another of the album's highlights, 'Mod Diff V Diff Hard Severe' kicks off with a guitar attack that wouldn't be out of place on a Hold Steady intro (and that's a double headliner I'd pay a very large amount of money to see) and sprints headlong into an energetic rock-climbing metaphor about relationships.

It's all rather glorious and – amazingly – the Great British Public seems to think so too. Creative Hub entered the album chart at number 33, Half Man Half Biscuit's highest ever chart placing, achieved entirely by word of mouth. If it took Jarvis Cocker 16 years to become an overnight success, the 33 years since the first Half Man Half Biscuit album makes Pulp's rise look positively meteoric.

After that sort of span of time and 14 albums most bands have either vanished up their own arses (U2, I'm looking at you), become thoroughly bored by the exercise (did anyone really mourn REM after they phoned in Around the Sun and Collapse Into Now?), or imploded after the death or departure of key members (too many to mention; Genesis is no great loss, but I'd give my left nut for a couple or three more Queen singles).

Half Man Half Biscuit have retained their creative energy and unique upbeat cynicism through line-up changes and even shutting down over 'musical similarities' in 1986, because the band is driven by Nigel Blackwell's songwriting. They owe their longevity surely to the fact that Blackwell, who famously hates touring and only very reluctantly gives interviews, has never chased fame or success.

In fact he's run a mile from it at every opportunity; he once turned down a chance to appear on legendary TV show The Tube because Tranmere Rovers were playing at home that night. Only releasing an album when it suits him enables Blackwell to exert a degree of quality control more motivated bands can only dream of.

People's Choice: Your favourite songs about bikes and cycling

Creative Hub is a high point in Half Man Half Biscuit history. If you're already into them, even only to the extent of dimly remembering 'All I Want For Christmas Is A Dukla Prague Away Kit' or 'Time Flies By (When You're A Driver Of A Train)' then you should buy it. If you're not yet into them but you like a bloody well-crafted tune, jangly guitars and a sardonic but affectionate lyrical take on English life, you should buy it.

In keeping with their usual Sales Suppression Strategy, record label Probe Plus has sold out at the time of writing, so you'll just have to buy it from Amazon. Yes, it's an evil corporate giant, but a) you'll be helping keep road.cc going as we get a tiny slice of affiliate dosh and b) you can download the MP3 version immediately and tell me I'm a sad old git who urgently needs to update his musical taste.

Half Man Half Biscuit play the O2 Forum, Kentish Town, London on 8 June; O2 Academy, Liverpool on 28 September (sold out); and O2 Ritz, Manchester on 30 November.

Make and model: Half Man Half Biscuit No One Cares About Your Creative Hub so Get Your Fuckin' Hedge Cut

It's the 14th studio album by the mighty Half Man Half Biscuit, comprising the following tracks:

Man of Constant Sorrow (With A Garage In Constant Use)

What Made Colombia Famous

Every Time a Bell Rings

Would you recommend the product to a friend? Enthusiastically

The best Half Man Half Biscuit for quite some time.