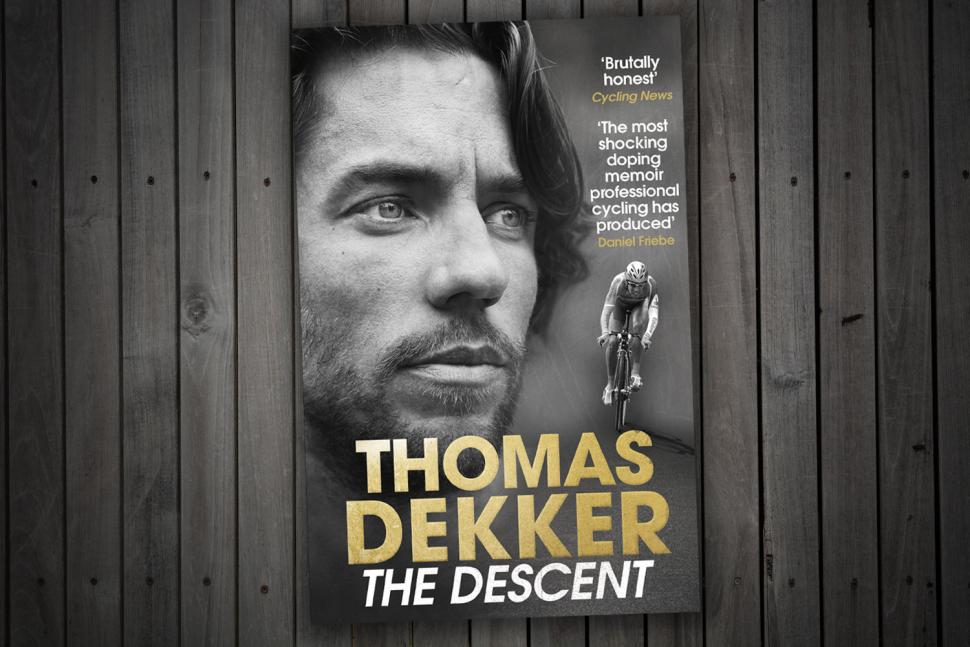 The Descent by Thomas Dekker

7
10
Another reformed doper, another biography, another all-too-familiar tale taken to extremes
Weight:
250g
Contact:
www.penguin.co.uk
How we test

Here we have a handy guide on how to properly screw up a promising cycling career, should you want to do the same. It will help if you are immature, irresponsible, and mix with the wrong people – but making bad decisions will be more important. If you can lose all perspective and become big-headed because of early successes, that will make the inevitable disintegration even more comprehensive. The Descent offers a depressingly familiar but nonetheless fascinating story of yet another professional rider leaving the sport after breaking the rules – and, crucially, getting caught doing it.

I wish books like this didn't exist. I don't like proven cheats being financially rewarded for writing about their misdemeanours, and I am getting tired of them bringing attention of the wrong kind to cycling. I fear that such books do as much to perpetuate the doping culture in our sport as help to eradicate it, by inuring us to the practice so that we are no longer surprised at what goes on. Above all, I don't like the fact that there are now so many confessional books, with yet more to come. Probably.

Having said that, some of these tell-all biographies do make for compelling reading (such as Tyler Hamilton's), sometimes because they give us a unique insight into that side of the sport, or because the rider makes some startling revelations.

However, even when he has the opportunity to do so, Dekker does not implicate others: 'I'm sitting in a restaurant in Lucca having dinner with another cyclist who makes use of Fuentes's services. I won't mention his name – I reckon it's up to him to come clean.' That's Eufemiano Fuentes, who 'has a whole range of dope on offer'. Presumably that other rider has not admitted to doping or been caught yet, which suggests there might be more to come.

I thought that The Descent would be handicapped by appearing after so many other exposés: surely we have heard everything there is to know about the murkier side of pro cycling? And after all, Dekker was hardly the most successful rider in the peloton, so his name is not going to be a big draw.

Despite my misgivings, The Descent actually turned out to offer something a bit different to other cycling biographies. It was co-written with Thijs Zonneveld, and later translated (from Dutch) by David Doherty; between them they have managed to give the impression of it being all Dekker's own words, with none of the awkward prose that can arise from translations.

Comprising 37 short chapters, the book is a punchy and undemanding read, often with unusually short sentences. Like this.

Dekker liked money and sex, and soon discovered that when he did well at cycling he would get both, so obviously he wanted to do whatever it took to continue with that success. Dekker often comes across as being rather unlikeable – and I fluctuated between feeling sympathy for him and hoping that he wouldn't get away with his extreme behaviour. But mostly the latter.

Unlike most other biographies, he goes into some revealing detail about money matters, telling us about some impressive salary negotiations that rewarded future promise more than past success: starting with a €5,000 salary as a rookie in 2003 (albeit with an additional €25,000 of prize money), he quickly pushes for more and negotiates €17,500 for the following year.

I reckon that Dekker's eventual downfall was assured when he chose Jacques Hanegraaf to be his agent. It is frightening to see the extent to which both parties pursue 'success' and are blind to the risks; Dekker seems to be grateful that it was Hanegraaf who explained to his parents 'that all the top riders are playing a grown-up game and that it is time for me to join in'.

'As the years went by I could feel it coming. I knew doping would cross my path. And when it happened I did not back away...The realisation that doping was necessary grew and grew. Without doping I was a good rider, but not good enough.' And so the point of no-return is passed.

Despite Dekker having already signed a deal with the Rabobank team for a salary of €100,000 for 2005 and 2006, Hanegraaf insists on trying to double that as soon as he arrived on the scene. He was unsuccessful on that occasion, but did later break the Rabobank contract and successfully negotiate a €400,000 salary – and of course he benefits as well thanks to his 10% commission.

Even after their relationship has ended, Hanegraaf presents Dekker 'with a bill for over €90,000 in lost revenue. As he sees it, he still has a right to commission on the 18 month's salary I missed out on when Lotto fired me for doping.' The dispute ends up in court: it is the sort of case where you would not mind if neither party won, but it is Dekker who triumphs.

It is worth noting that according to Zonneveld some of those featured in the book, including Hanegraaf, 'repudiate Thomas's version of events.'

When the Garmin and Cannondale teams merge, Dekker finds himself surplus to requirements and without a contract – again. In an effort to prove his worth to prospective teams Dekker plans to take advantage of the new rules surrounding the Hour record. On the 25th of February 2015 he falls 271 metres short of Rohan Dennis's mark.

> Thomas Dekker misses out on UCI Hour record in Mexico

If the Hour record attempt had gone the other way (or if he had tackled it before Dennis), who knows what might have become of Dekker's career? As it is, the failure eventually led to him turning his back on cycling.

The other significant theme throughout the book is Dekker's pursuit of sex. Even after he falls in love with a lady called Linda, he says, 'For all her beauty, for all the good times we share, I can't stay faithful to her. The temptation of other women is too strong.'

He seems to spend an inordinate amount of time, energy, and money in pursuit of sex. I kept wondering when Linda would see sense and leave him – which she does eventually. During the ban, he writes: 'I cheat on Linda with an endless parade of women. Tourists, waitresses, whores, Spanish, Italian, Russian. Women from God knows where whose names I don't even know...Every woman who falls for my pick-up routine is like a race won; if only for a while it helps me believe that I still count for something.'

If you ever wanted the sort of undemanding book that you might buy at an airport to keep you engrossed during a flight, but you wanted it to be about your favourite sport, then this is it. Just don't expect it to have much coverage of actual cycling. This means that it could have appeal beyond cycling fans, but it would be a pity if this were their only impression of the sport.

Another reformed doper, another biography, another all-too-familiar tale taken to extremes

Make and model: The Descent by Thomas Dekker

'I have success, money, women. I've been lionised by the public and the media. The world is at my feet. I've spread my wings and here I am, soaring above everything and everyone. But in reality, the descent has already begun.'

Thomas Dekker was set to become one of pro cycling's superstars. He represented the Netherlands at the 2004 Summer Olympics in Athens and won the Tirreno–Adriatico in 2006, followed by the Tour de Romandie in 2007. But before long, he found himself buckling under the pressure to perform and sucked in by the lure of hedonistic highs. Now, after years of leading a double life, Dekker exposes the truth.

In The Descent, Dekker tells his shocking story of hotel room blood bags, shady rendezvous with dealers, partying with prostitutes at the Tour de France and the consequences of prolific EPO use. This is Dekker's journey from youthful idealism to a sordid path of excess and doping that lays bare pro-cycling's darkest secrets like never before. It is the story from a man who has nothing left to lose.

Fairly expensive for a paperback of this size, with only minor savings to be found on-line or with the e-book version

A well-written and fast-moving story that really keeps your attention.

That it is the doping side of his career that will attract readers.

Would you consider buying the product? I would prefer to beg, borrow, or steal.

However much I dislike so much of what this book stands for, I can appreciate that it is an entertaining read that will hold your attention throughout.