Where is Britain's safest and most dangerous city for cycling? This new research (might) have some answers

Bristol, London and Manchester are all in the top-ten most dangerous cities to cycle in the UK according to research by Claims.co.uk, although crucial factors such as the number of cycling journeys appear to be omitted from the analysis
by Dan Alexander

Cycling can be one of the most rewarding ways to get from A to B, especially in urban areas where there are already too many cars on the road. Chances are if you are reading this then you probably don't need convincing.

Unfortunately however, riding a bicycle through a city can, at other times, also be some of the most stressful, dangerous and downright unpleasant riding you'll ever do. More road users, as well as more junctions and roundabouts all increase the likelihood of collisions.

Just from personal experience, six months of commuting to London by bike led to as many falls as riding in the lanes during the previous decade. Injury compensation website Claims.co.uk has done some actual research to try to crunch the figures, which should hopefully be a touch more informative than me emotionally judging cities based on how they treated me...

They analysed over 12,000 cycling routes in cities up and down the United Kingdom, factoring in the number of incidents, steepness(?), surface quality and lighting, to come up with a 'danger score' for each. Yes, a bit like Top Trumps...

Surprisingly considering some of the things said about cycling in Essex recently, its third largest city Chelmsford came out on top as the safest city for cyclists, with a low 'average bike accident score' of 0.08, as well as reasonable surface quality and lighting.

Worcester and Nottingham made the podium in second and third respectively. Nottingham had a lower 'accident score' than Worcester, but Claims.co.uk's research assessed the Worcestershire city as safer due to its superior road surfaces and lighting.

There was Midlands representation elsewhere in the safest top-ten list, with Leicester ranked seventh.

With that said, there is a definite southern feel to the safest cities: Gloucester, Cambridge, St Albans and Norwich came fifth, sixth, ninth and tenth respectively.

Of the more northerly cities to make the top-ten, Lincoln ranked highest in fourth place, while York and Wakefield were eighth and ninth. 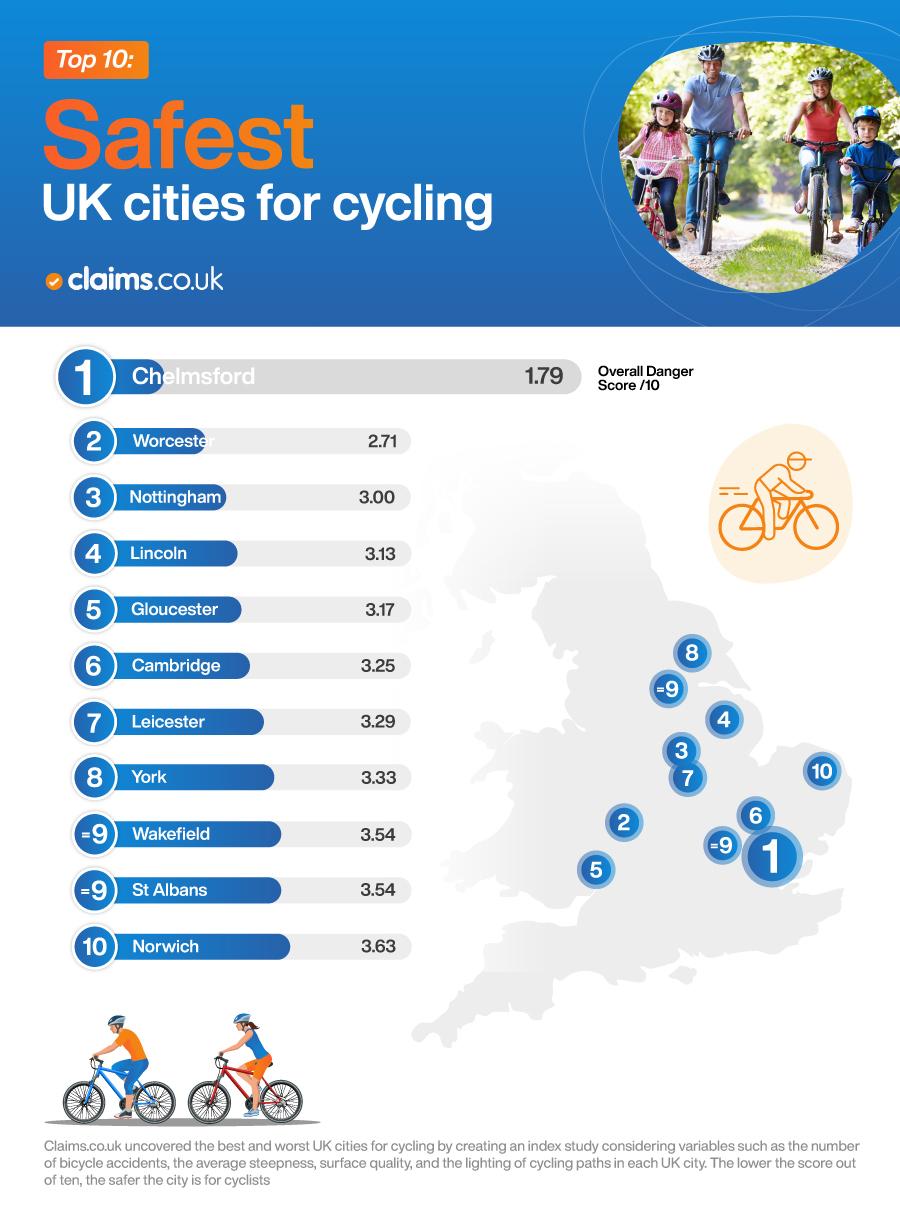 UK's 'most dangerous cities for cycling'

Birmingham was ranked as the most dangerous city for cyclists in the UK according to Claims.co.uk, who scored the second city a danger score of 7.38, just under six points higher than Chelmsford, and five points higher than nearby Worcester.

Newcastle upon Tyne, Plymouth, and Sheffield followed closely behind, with 7.21, 7.17 and 7.08 scores respectively.

Perhaps surprisingly, London only came fifth in the top-ten most dangerous list. The English capital had the highest 'accident score' by far — 9.58, but was helped by the relatively simple terrain and well-surfaced roads. Where this research appears to fall down is on analysis of the number of cyclists and cycling journeys, with the number of reported 'bike crashes' as Claims.co.uk put it seemingly one of the main deciding factors in assigning a city its overall danger score. This could be why most of the top 10 'most dangerous' are higher population cities, and many of the 'safest' are considerably smaller.

While Chelmsford and Worcester both had a low number of reported 'bike crashes', this could in part be because of low cycling numbers. We reported on the dangers of cycling in Essex on the road.cc Podcast recently, while a controversial cycling ban in Worcester city centre isn't exactly a great advert for cycling in that area.

We could also find fault with the wording of the 'bike accident score' metric used by Claims.co.uk, but the people behind the Road Collision Reporting Guidelines can probably explain why that is far better than us.

What do you think? Can we create a 'score' to represent how safe cities are to cycle in? Any surprises? Where did your city rank?