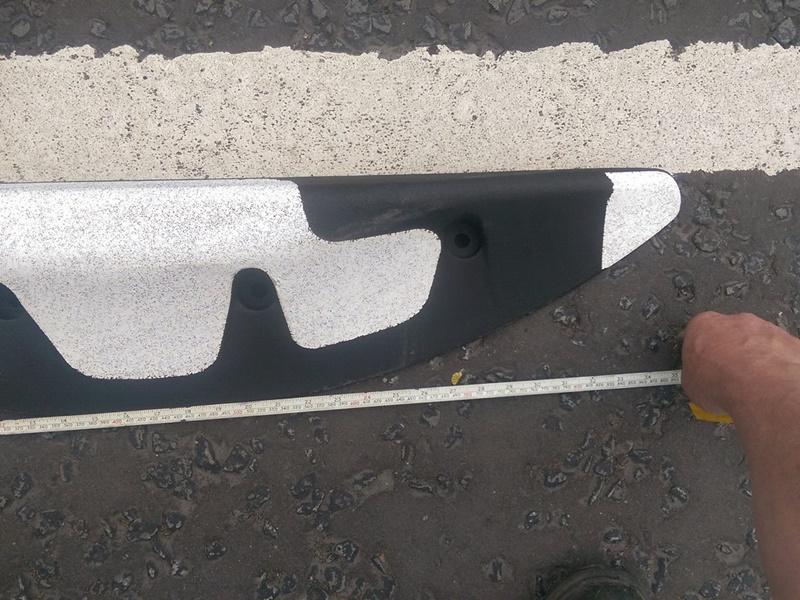 A 78-year-old woman was left with a broken wrist, a black eye and concussion after tripping over a new bike lane marker in Middlesborough.

The separators, known as ‘Orcas’, form part of the newly installed cycle lane on the Linthorpe Road, which is due to finally be completed this month after a series of delays caused by adverse ground issues and supply chain issues.

Middlesborough Council says the protected bike lane, which was estimated to cost up to £2.4 million, will provide cyclists with a “quick and safe” route into the town centre while also creating a more pedestrian-friendly environment with improved road crossings.

However, the new low ‘Orca’ barriers – which, though designed to protect cyclists from motorists, have come in for criticism from those who say they aren’t large enough to deter drivers while still being of sufficient size to be a hazard for people on bikes – have unfortunately left a pensioner in pain weeks after she tripped and fell over one.

78-year-old Dorothy, from Stokesley, sustained a nasty gash to her forehead, a broken wrist, and multiple bruises in the incident, which occurred in late August.

Her husband Chris told Teeside Live that, while the couple understands the need for the separators to protect cyclists using the bike lane, the council should do more to ensure the safety of pedestrians.

"It was a shock,” the retired civil and highway engineer said. “I dropped her off and she went to cross the road rather than using the crossing that was some way down. She was crossing the road section with two traffic lanes and cycleways outside, with raised black and white markers between.

“She tripped and banged her head on the road kerb and was badly injured, with a nasty gash to her forehead, [and was] bleeding profusely. [She] also had a mild concussion, many bruises, and a broken wrist.”

Referring to the separators, Chris said: “They are very low down and when you are looking for traffic you can’t see them. They shouldn’t allow pedestrians to cross where there are these hazards.

“I understand they are there to protect cyclists but there should then be a fixed barrier on both sides between the crossing points, and possibly even more crossings along the road.

“I don’t disagree with the bollards and there is no good campaigning to get rid of them, but there has to be fixed barriers.”

Responding to Dorothy’s unfortunate incident, a spokesperson for Middlesborough Council said: “The Linthorpe Road cycle lane has been designed and implemented in line with national safety guidelines and schemes in other towns and cities.

“Nevertheless, the scheme will continue to be monitored and we would recommend people use designated road crossing points which are located at frequent intervals.”

Orcas (and similar products known as Armadillos), such as those used on the new Linthorpe Road bike lane, have long been a target of criticism from those who believe they are dangerous for all road users.

Last year, Cardiff Council committed to using spray paint to increase the visibility of barriers protecting a two-way cycle lane in Roath, following reports of “dozens” of pedestrians injuring themselves after tripping over the markers.

In 2015, the North East Motorcycle Action Group (MAG) criticised the installation of Orcas on the Great North Road in Gosworth, claiming that the “obstacles” could result in someone’s death.

Katalina Ferguson, a spokeswoman for the group, said at the time: “It’s mad. In order to try and protect cyclists from cars they have sacrificed the safety of motorcyclists and scooterists by reducing their available road space and then throwing obstacles in their way. In Manchester, where these were trialled, even the cyclists are against them.”