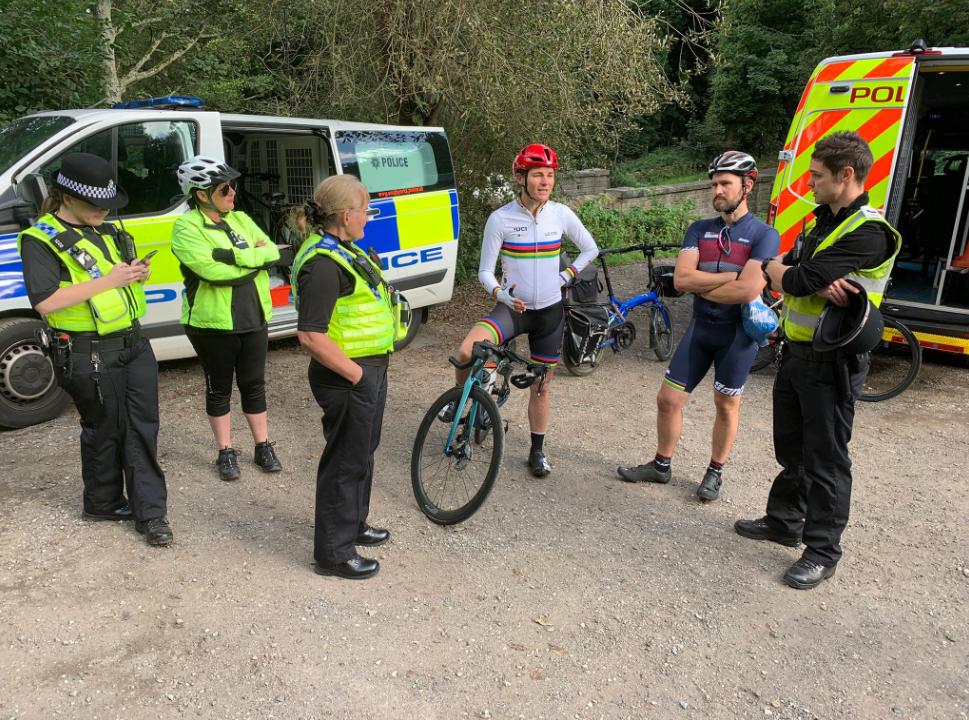 Fresh from winning the 17th Paralympic gold medal of her career at Tokyo three weeks ago and wearing the rainbow jersey of para-cycling road world champion, Storey accompanied the operation on Friday afternoon on the A57 through her role as active travel commissioner for the Sheffield City Region.

It was carried out as part of last week’s Project EDWARD, with the acronym standing for European Day Without A Road Death, a Europe-wide initiative launched five years ago by the European Traffic Police Network and supported by the European Commission.

An account of the operation, carried out on Manchester Road from Rails Road up to Cutthroat Bridge, was posted to Strava by Inspector Kevin Smith of the Sheffield Northwest Neighbourhood Policing Team, who said that it was one of the roads they receive most complaints over. 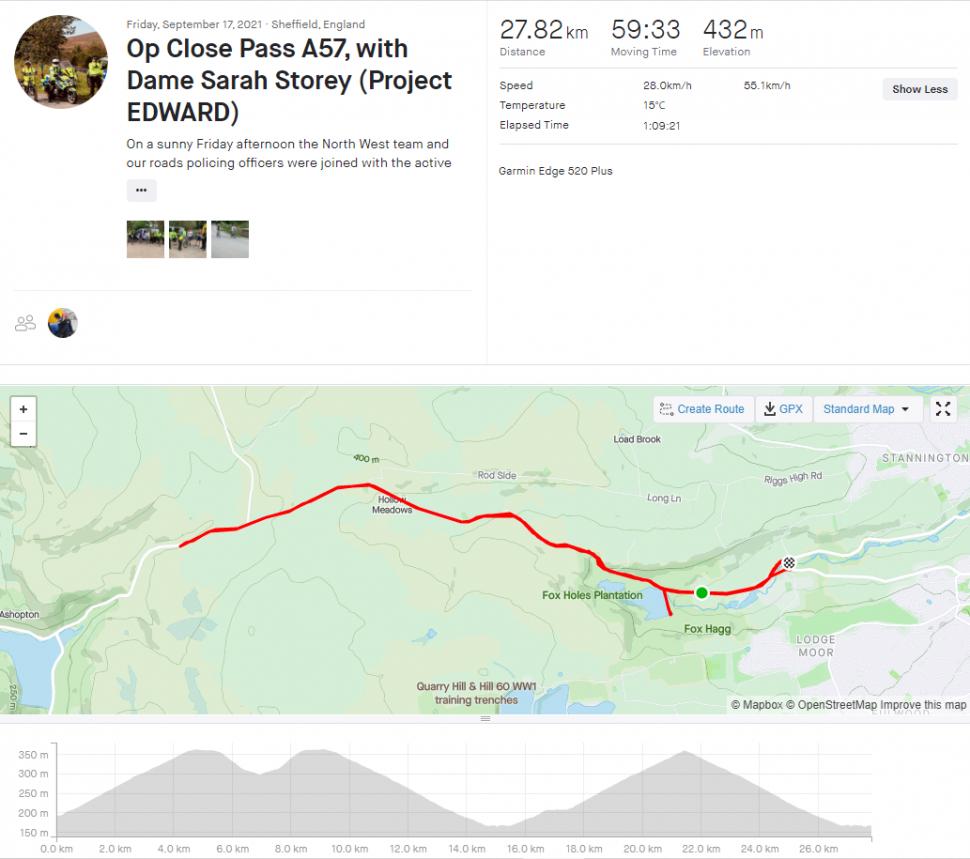 “Two teams of cyclists were used, two on road bikes wearing road bike gear and looking, at least in one case, like an athlete,” he wrote. “The other pair were on our electrically assisted e-bikes.”

He outlined the specific issues related to the stretch of road chosen, which reflect a scenario we often see in submissions to our Near Miss of the Day feature.

>Near Miss of the Day

“The A57 is a long climb with lots of double white lines due to some blind bends,” Inspector Smith said.

“It is often safer to cycle two abreast on these sections to reduce the temptation of some motorists to try and ‘squeeze’ the cyclist to the side of the road by overtaking on a blind bend and then pulling back left to avoid a head on collision with traffic the other way approaching at 50 miles per hour.

“Even when cycling solo, it is often safest to ride in primary position on these bends, to ensure that you are visible around the bends,” the officer said.

“Unfortunately, it was not the most stress-free afternoon of cycling, with lots of people apparently unable to overtake without the assistance of their horn (perhaps it is linked to a booster system?).

“Sarah’s Garmin radar detected 110 overtakes over the two laps we completed, and of those 110 overtakes, 20 were stopped for advice purposes, which is disappointing.

“Our other pair were also close passed a few times, taking the total to 25 vehicles stopped for advice purposes, and another five that we will catch up with through the post,” Inspector Smith said.

“In total 10 prosecutions for a range of offences from careless driving to contravening double white lines. It seems many drivers are unaware that if a cyclist is travelling at more than 10 miles per hour there is no loophole to allow them to overtake on double white lines, and we saw a depressing level of selfish and poor behaviour throughout the day.”

Referring to the rule which says, among other things, that cyclists “should never ride more than two abreast, and ride in single file on narrow or busy roads and when riding round bends,” the inspector revealed, “We’ve already seen some ‘what about Highway Code rule 66’ whataboutism on twitter by people trying to justify close passes.

Inspector Smith added: “As you can imagine, trying to keep up with a gold medallist also added a new level of difficulty to the affair (this was my second highest wattage 20 minutes of 2021. and trust me, I wasn’t planning on going all out), but it was good to show Dame [Sarah] Storey how we run close pass operations to try and educate road users, either by speaking to them at the side of the road, or by providing consequences to their poor driving choices.”