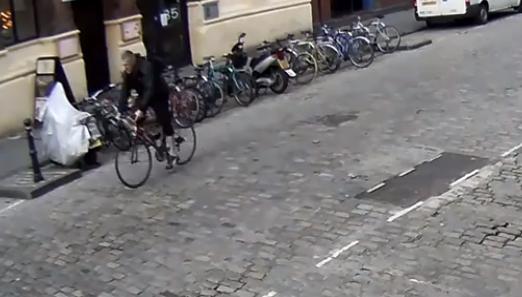 And in Sussex, a bike theft ends on a much happier note
by Sarah Barth

A man whose bike was stolen in Bristol has uploaded a video of the theft to YouTube in the hope of identifying the thief.

The victim wrote on the video sharing site:

My bike was stolen from King Street, Bristol by this guy. I'm gutted. I loved my bike and had many, many really good rides on it. He's obviously very professional and likely to do the same thing over and over again. Help catch this guy. Please share this video. Let's make him famous.

He also took to the site Bristol Stolen Bikes with photos and descriptions of the bike, stolen on September 9.

It’s a red Trek 2.3 with black bar tape and pedals with SPD clips on one side, flat on the other.

Anyone with information should contact Avon and Somerset Police on the non-emergency 101 number.

Meanwhile in Sussex, a woman is celebrating after the person who stole her bike was shamed into returning it, along with a note to apologise.

Eileen Remedios, a nurse, said that the action had ‘restored her faith in humanity,’ after she attached a note to a nearby lamppost begging for her bike back.

Eileen, from Brighton, wrote: "Please return my bike. It is old but loved and will be frightened without its owner."

The next day, she found the cycle attached to a nearby lamppost, and under her doormat was a card with the keys to the lock attached.
It read:  "A great big fat...SORRY! From The Reformed Bike Thief! (I didn't mistreat it)."

Eileen told Yahoo News: "It really has restored my faith in humanity.

"I was feeling quite cross. I thought why would someone want to take my old bike? I thought maybe someone was drunk and had borrowed it.

"But I never imagined that someone would bring it back.

"The bike hasn't got much value but it was given to me by an old friend and gets me from A to B."

"It was a real inconvenience when it disappeared. Everyone can relate to having a bike stolen, it's gutting.

"The note certainly worked and I wanted to share a good story with a nice ending.

"Who am I to question why, but I am delighted to have my old blue bike back with me."

Charmed Eileen decided to respond once again, writing a further note to the thief reading: "To the sweet bike borrower. Thanks for returning my bike. She had a nice time but is delighted to be back with me."