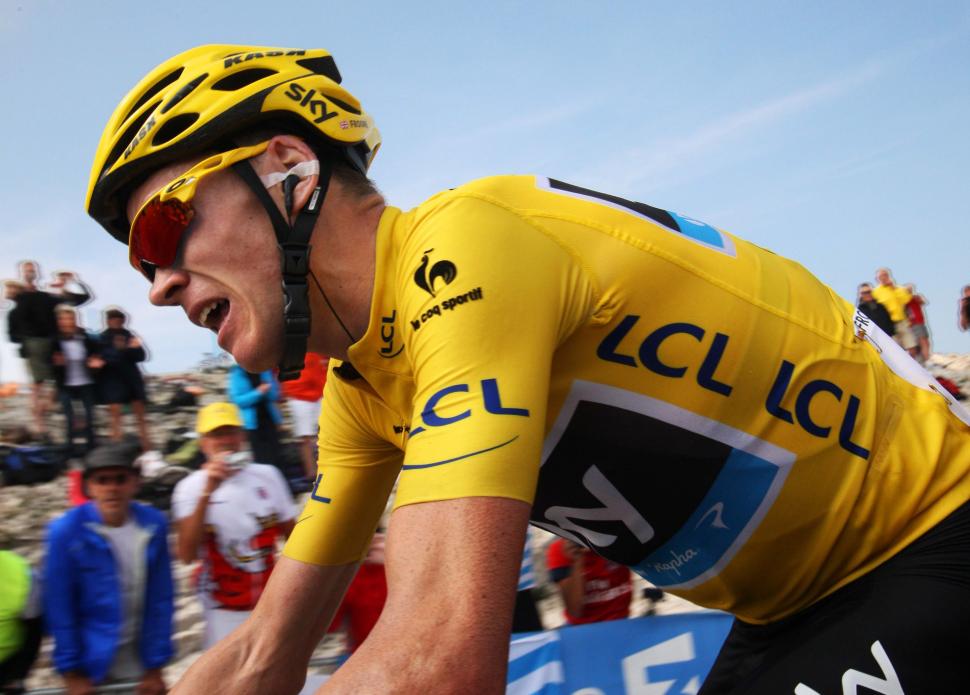 Meanwhile, WADA declines to get involved and UK Anti-Doping says it can't offer a "kite mark" of cleanliness...
by John Stevenson

French sports newspaper l’Equipe has this morning published an analysis of Chris Froome’s power data from 18 climbs over the last two years.

The headline finding from l’Equipe’s expert, Fred Grappe is that Froome’s power data for the last two years is consistent, and that he has an exceptionally high five-minute maximum power output, which gives him an advantage over other riders.

Grappe draws four other conclusions from the data, which covers the period from the 2011 Tour of Spain to Sunday's Tour de France stage on Mont Vontoux: Froome’s power curve, his ability to generate power versus time, is normal and his rides in this Tour are consistent with the data; his VO2 max must be close to the known physiological limits, though Team Sky say it has never been measured; his weight has been stable for the las two years; and he mus have excellent powers of recovery.

L’Equipe, which is owned by Amaury Sports Organisation, the same company that owns and runs the Tour de France, approached Sky after team principal Sir Dave Brailsford suggested on Monday that the team would be willing to submit its data to the World Anti-Doping Agency.

Fred Grappe, L’Equipe’s expert is a doctor of biomechanics and physiology, and sports coach to the FdJ.fr team. He has long been one of the French sport press’s go-to guys for physiological commentary but is seen by some as too much of a cycling insider to be fully impartial.

On Twitter this morning Team Sky Head of Business Operations Fran Millar, said that the World Anti-Doping Agency has told the team that it can’t help with analysing their riders’ data. The squad is hoping UK Anti-Doping will get involved.

According to The Guardian, UK Anti-Doping will welcome Team Sky’s offer to share their performance data but is likely to tell Sky that it can’t award a “kite mark” or definitively rule that any team or rider is clean. “It’s not what we’re there to do,” said the paper’s source.

As a UK-registered team, Sky comes under UK Anti-Doping's jurisdiction and is therefore already required to share with the agency anything that might help in the fight against doping.

However, it seems this has not previously included detailed rider performance data.

UK Anti-Doping’s chief executive Andy Parkinson told The Guardian it was inevitable that this year’s Tour would be the subject of intense focus in the wake of the United States Anti-Doping Agency stripping Lance Armstrong of his seven Tour wins.

“There are many tools available to anti-doping authorities, including the use and analysis of all types of data,” Parkinson said.

“UKAD has regularly communicated the need for those in sport to share all relevant intelligence with those working to protect clean sport. Being the first Tour since the Usada decision there is an obvious need for teams to be as transparent as possible.”

The agency would have to analyse Sky’s performance data before deciding how relevant it is. If all teams and sports were to submit performance and physiological data for all their athletes it would create what the paper drily calls a “resource issue”.