New British time trial champion Joanna Rowsell says the strength of women’s cycling in Britain now is likely to mean it will be a tough road race when the national championships continue in Glasgow tomorrow. In an exclusive interview with road.cc, the 24-year-old Wiggle Honda rider also talks about issues including racing in front of home crowds, her plans for the rest of 2013, and how her life has changed since London 2012.

Already a world and Olympic champion in the team pursuit on the track, Thursday’s national time trial championship in Ayrshire ended with Rowsell again standing in the number-one spot on the podium. We ask her how winning the national title compared with those other successes.

“It feels really, really good,” she replies. “The time trial’s obviously not worlds apart from track racing, but it is a 22-mile race with hills and all sorts of other things.

“It’s very different from the almost clinical environment of the velodrome where everything’s so precise, a lot more can happen in a time trial and it’s a lot further than what I’m used to, so it’s been a bit different training for it. 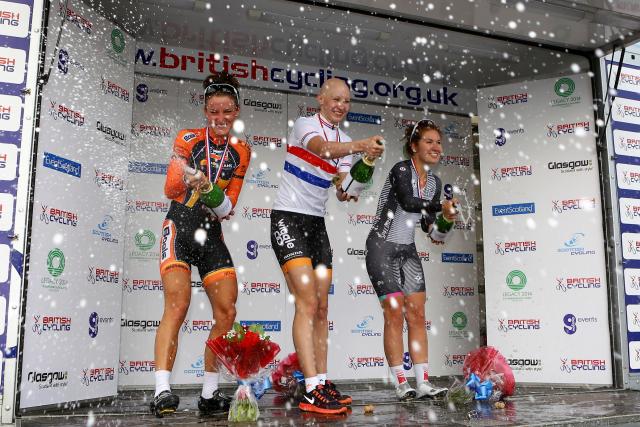 In tomorrow’s road race, she will line up alongside Wiggle Honda team mates Laura Trott and Dani King, with whom she secured Olympic gold in London last August on what swiftly became known as Super Saturday, with gold medals also coming in rowing and athletics.

Rowsell says that while she hadn’t had a chance to see the road race course in Glasgow in person yet – she and her team mates were due to recce it today – and has heard varying reports about it, she expects a tough race.

“Everyone wants a good, hard, aggressive race, people are going to want to go on the attack,” she reflects, adding that with domestic racing setting high standards this year, “there are British-based teams who will be out to race hard against us. It’s difficult to know how it’s going to go in that sense. I think everyone will just get stuck in and do their best.”

Earlier this week, UCI presidential candidate Brian Cookson said he believed the world governing body could be doing much more for women’s cycling, and the issue is likely to be an important part of his manifesto which will be launched in Paris on Monday.

Asked how she thought the national governing body Cookson currently presides over is doing in that regard, Rowsell says: “British Cycling is a world class organisation and very good at gender equality, it’s got good programmes for men and women.

She singles out the Johnson Health Tech Grand Prix Series, raced alongside the Pearl Izumi Tour Series and as a result often referred to among riders as ‘the women’s tour series’ as an example of a positive move towards achieving parity between the genders in terms of road racing in the UK, with the next step being to secure a UCI race.

But she points out that while in other disciplines women’s events are held side-by-side with men’s ones, such as at track meets, there are some unique challenges such as logistical issues in carrying that through to road racing.

Also, she says that the female side of the sport does struggle to attract sponsorship in large part because it lacks the same level of TV exposure that the men’s side has; Rowsell does, however, give the UCI credit for making highlights of women’s world cup races available on YouTube as well as via Eurosport.

One-day races including some of the Classics do afford an opportunity to run men’s and women’s events on the same course and the same day, Rowsell herself recalling the experience of riding in front of big crowds at Het Nieuwsblad this year.

But it’s the crowds that cheered Rowsell and many of Britain’s other top female riders racing in the Rapha Women’s Criterium at the at the IG London Nocturne earlier this month get a special mention.

“That was really good, there were so many people there, it reminded me of the Olympics really with the atmosphere, and it’s always special to have the crowd on our side. It is fantastic how much it’s grown over the past few years, we always love racing with a crowd.”

Rowsell herself finished seventh, and didn’t see the close finish between her team mate, Laura Trott, announced as the winner on the night, and MG-Maxifuel’s Hannah Barnes.

It would transpire in the following days that Barnes in fact had crossed the line first, but according to organisers had been relegated due to dangerous riding – she would subsequently be reinstated after British Cycling commissaires reconsidered their decision.

“That was all very strange, but these things happen, don’t they?” says Rowsell. 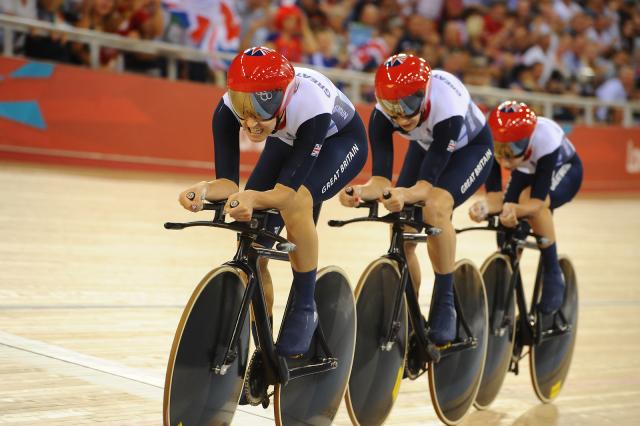 Team GB on the way to women's pursuit gold in London (Picture: Britishcycling.org.uk)

Nearly a year on from winning gold in the velodrome in London last year, how has becoming Olympic champion changed Rowsell’s life?

“A lot of Olympic athletes who’ve been asked that question say ‘It hasn’t changed it at all’ but it’s definitely changed my life.

“I still get out and ride on my bike every day, I still wash my own bikes, cook my own food, so nothing’s changed day to day like that.

“But there’s more attention when I go to a race, like at the national time trial championships, people were asking me for autographs and photos before I was warming up, and I’ve never had that sort of thing before.

“Before the Olympics, I’d go along to a race, jump on the turbo, do my warm-up, go and do my ride and go home.

“Now, whenever I go to a race, there’s always people wanting to shake my hand, say ‘congratulations,’ ask for a photo, which I don’t mind at all, it’s always a pleasure, but you do need to just factor in some extra time.”

After tomorrow’s road race, however, Rowsell’s next appointment won’t be for the start of a race, a media interview, or a visit to Buckingham Palace to receive an MBE from the Queen.

“I’m having my tonsils out next week, so in a way this is my end of season now, and then it’s basically about preparing for the track season,” she reveals, although there will still be some road action in the months ahead.

“Hopefully I’m riding a stage race in Germany, but that depends purely on how I recover from the operation, then we’re back on the track at the beginning of August, and my first track competition is at the end of that month in Poland.”

There’s another goal too for both Rowsell and Wiggle Honda – she’s hoping to make the selection for the team time trial at the world championships in Tuscany in September, an event the team has made a big target for its debut year.

It’s a discipline in which the team has abundant strength in depth – besides those four British riders who have beaten the world riding as a unit on the track, there’s a multiple individual time trial world championship medallist on the road in the shape of Linda Villumsen.

Earlier this month, the team signed German rider Charlotte Becker from Argos-Shimano; last year, she was a member of the Specialized-Lululemon outfit that won the team time trial at last year's worlds, so will also strengthen Wiggle Honda’s line-up in the discipline.

Beyond that, Rowsell has a longer term aim on the track, the world championships in Cali, Colombia next year, and with the women’s team pursuit set to move to the same four-rider, 4,000-metre format as the men’s version, there’s every chance Wiggle Honda riders will occupy all four slots.

Going back to Thursday’s victory, Rowsell provides an example of how the profile in Britain of not just cycling, but women’s cycling specifically, has been transformed.

“There was a picture of me and Lizzie [Armitstead, who finished second] on the podium in the Guardian,” she explains.

“When would that have made a picture in the newspaper before? The British national time trial championships?”

It’s a rhetorical question, but the fact that photo appeared at all is in large part due to the efforts of Rowsell and her fellow Team GB riders who made such a memorable impact on the country last summer.

Big crowds in Glasgow tomorrow, a year before the city hosts the Commonwealth Games, will provide further proof of that – and they’ll be there to cheer on the competitors in the women’s race every bit as much as the men’s one.