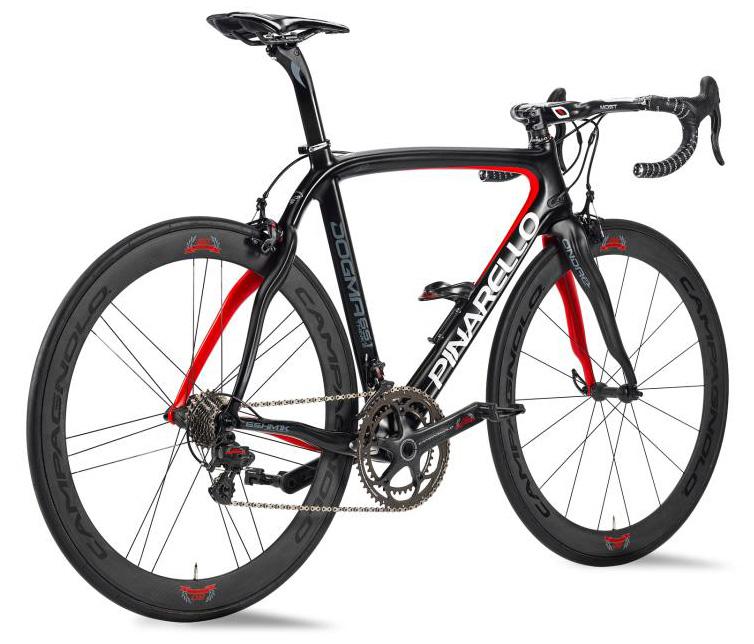 Not to be outdone by Ridley, who released a limited edition Helium SL with Campagnolo’s 80th anniversary Super Record groupset a while ago, Pinarello have followed suit with a very special version of their top-end Dogma 65.1.

Based aound the frame that Chris Froome could pilot to Tour de France success next month, this example is built using the limited edition groupset released to celebrate the component manufacturers 80th birthday. We don’t have a price for it - just don’t expect it to be cheap...

Specialized about to unveil a new aero helmet

Specialized are teasing us with a glimpse of what appears to be a new aero helmet on their website this week.

The shadowing is sufficient that it’s difficult to see exactly what is going on. It does look like it could be a version of the aero road helmet that Mark Cavendish has been wearing most of this season, though the elongated tail does suggest it might be a time trial helmet. One thing is for sure, with the Tour de France just a matter of days away, we're going to see a lot of new products soon. We're sending our road.cc spies to Corsica next week to hunt it all down.

Intended to be their first dedicated Garmin (or other GPS computer that uses the circular quarter turn interface) mount for mountain bikes, we think this new QuickView will also appeal to road and touring cyclists who don’t want the computer floating out in front of the handlebars.

Like the regular QuickView mount we reviewed recently, it’s made from glass-filled nylon and has smooth chamfered edges, and fixes in place with a single T25 stainless steel bolt. This new mount uses a split clamp making it easier to fit to the bars. It weighs just 22g. It will cost €18 and is available now.

SRAM have also released an adaptor plate that lets you connect an older Garmin Edge 605/705 to the QuickView mount. It cost €5 and weighs 8g.

Nutrition company Multipower have launched a new Power Layer Bar packing 19.8g of protein in a 60g bar to boost recovery after a hard ride or race. There’s 23.8g of carbohydrates alongside the protein content, with 241kcal per bar.

There’s just one flavour at launch, Chocolate-Caramel Nut, with ingredients including four layers of nuts, caramel, crispies and chocolate. There are no artificial colours and it’s aspartame-free.

Shimano have opened a new website selling their own merchandise, including clothing, promotional items and gadgets direct to consumers. They say they’ve been receiving a lot of demand from people to buy Shimano branded products, including the complete Argos-Shimano team strip, so have decided to open their own webshop.

Unfortunately the website is only displayed in German and Dutch and there are no immediate plans for an English language version. Huh? If you can get around that, there’s all sorts on offer, from the aforementioned Argos-Shimano team kit, caps, jackets and holdall bags, to Shimano shirts, t-shirts and sweaters. There are plans to make more merchandise available over time.

Water off a Duck’s Back heads into John Lewis

Good news for British cycle clothing company Water off a Duck’s Back: they have just announced that department store John Lewis will be stocking their range of clothing. The company only launched two and a half years ago.

Water Off a Duck’s Back specialise in women’s specific cycle clothing. Their garments are intended to be high performance and well featured, but still look like the sort of coat you'd grab if you were off out to the shops, rather than a club ride. We’ve reviewed several of their garments, including the Cycle Macintosh and Kezzia jacket, and have been impressed with their style, attention to detail and features.

Culprit launched the Cruz Blade, a disc-equipped carbon road bike at Eurobike last year, and we brought you news of it here. Culprit have now brought out a cheaper version, with a frame made from T700 carbon fibre instead of T800 and specced it with a Shimano 105 groupset and TRP Spyre disc brakes.

They’ve also changed the bottom bracket from a BB30 to Shimano BB86 standard. The bike rolls on new Token wheels with 27mm alloy clincher road rims, a disc-only design. With a Ritchey cockpit the bike weighs in at 8.2kg for a size 55cm. It will cost $3,295, (which is about £2,120 on current exchange rates, although that's not the official UK price).

Irish company Motionfox have just launched a range of expandable hi-vis vests that are designed to fit over a bag or backpack. They can also be worn without a bag.

The vests fit in place with simple fasteners on the sides with elastic stretched around the waist to stop them flapping in the wind. The vests are available for adults and children, and cost £19.99 and £13.99 respectively. They’re available in 35 retailers in Ireland and three London bike shops, Edwardes Cycles, Richmond Station Cycle Centre and On Your Bike. We have one in for review at the moment so we'll let you know how it performs.

Marco Bertoletti is the man behind Legend Bikes, one of the few manufacturers still making all their frames entirely in Italy. They have their own carbon fibre production facility, and also work in steel, titanium and aluminium. This video gives an insight into the factory and the philosophy behind the brand.

Meet the Maker - Legend Bikes from Bespoked on Vimeo.

Heat map of where people ride

Heatmaps is an app that shows where people are riding, by pulling in data from Stava and compiling it on a map that shows frequent activity. The red areas show the more frequent rides and segments, so you can see where the really busy roads near you are.

The app only draws in data uploaded to their Race Shape app, not directly from Strava itself, so it doesn’t show a full representation of where people ride. Race Shape is an app that enables you to analyse Strava rides and see just where fast riders gained time on you in key segments. So when you lose a KOM by a few seconds, you can see exactly where it happened. The location data is used to compare your times at each location along the route.