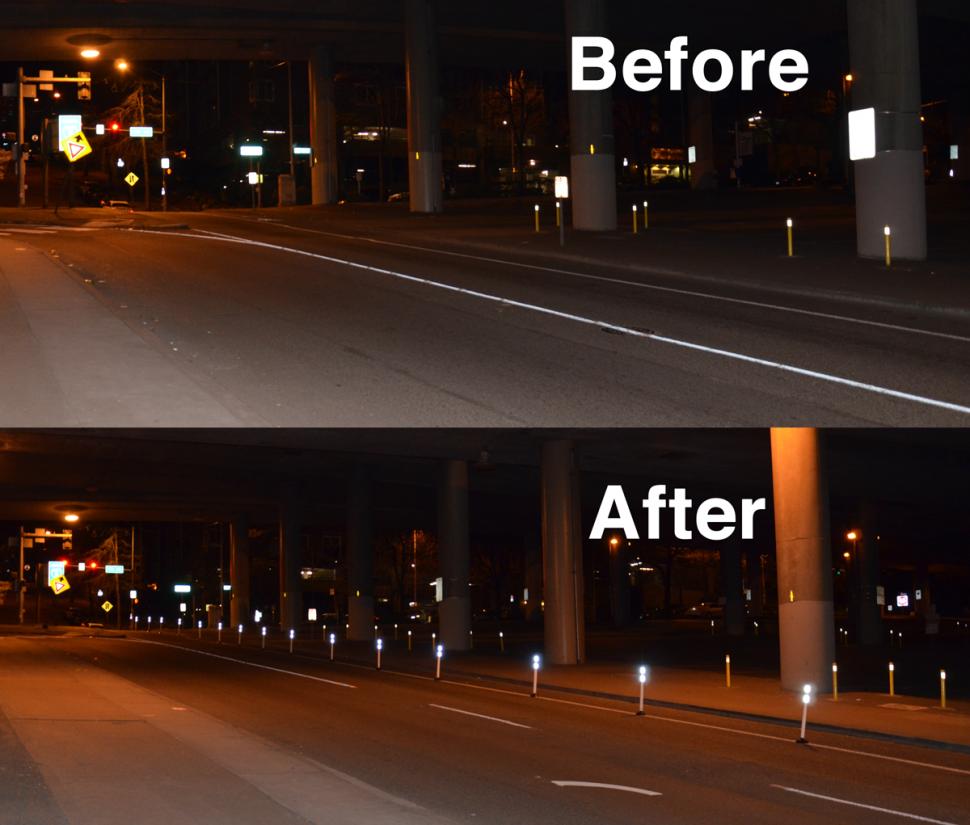 So polite, they even made it easy for police to dismantle their handiwork
by Sarah Barth

A self-styled 'reasonably polite' protest group installed a new safety feature along a Seattle bike lane - even making provisions for the removal of their improvements.

In a bid to show how much safer the streets could be, the Reasonably Polite Seattleites stuck plastic reflective poles along a lane in Cherry Street, making it both more visible and harder for vehicles to stray into.

They attached the poles using removable adhesive, making it easier for the police to remove them - which they duly did. However the police did attempt to reunite the group with their poles.

The protesters sent this (very polite) email to the police and the Seattle Dept of Transportation (SDOT), according to Seattle Bike Blog.

I’m emailing because this morning a friend and I installed a string of plastic pylons along the Cherry Street bike lane under I-5. I’ve attached a couple of pictures. In New York, Washington, D.C., Chicago, San Francisco, Portland, the city transportation department usually installs these things, which slow traffic to the posted speed limit, and afford cyclists some protection. Some might ask, very reasonably, how does a piece of cheap plastic protect you from a drunk or distracted driver in a two ton SUV? Based on my experience commuting in such lanes in other cities, 1) they slow speeding traffic by making the lane appear narrower (without actually reducing its size); and 2) it’s essentially a warning system for a drunk or distracted driver; once he hits one, he’s more likely to slow down, lessening the chance of hitting a cyclist or pedestrian down the road. This string cost about $350 in materials and required literally 10 minutes to install (admittedly, because SPD HQ is across the street, we hurried). SDOT will probably argue maintaining these things costs money, they complicate street cleaning, etc., etc. These are reasonable arguments, except that Chicago, D.C., San Francisco have confronted and overcome the same issues.

We chose this block fairly arbitrarily; we certainly don’t enjoy riding it, despite the fact the bike lane is relatively new–cars race past, gaining speed for the approaching hill, or to accelerate onto I-5. The grade is inclined, so cycling is slow–thus, as cars accelerate to 45 mph, we’re moving at 4 or 5. But this certainly wasn’t the worst bike facility in Seattle. Our intention was merely to demonstrate how an incredibly modest investment and a few minutes of SDOT’s time is capable of transforming a marginal, under-utilized and dangerous bike facility into one dramatically safer for cars, pedestrians and bicyclists. (This is not mere rhetoric; as you undoubtedly know, New York City’s investments in pedestrian facilities, bike lanes and cycletracks led to the lowest number of traffic related facilities in the city’s recorded history—not per capita, but in absolute numbers, despite exponential population growth; in other words, these facilities are safer not only for pedestrians and cyclists, but drivers.)

We sincerely hope the new master bicycle plan, which currently includes 137 miles of cycletracks, is fully implemented, though we’re understandably skeptical. While we’re waiting, many obvious, inexpensive, relatively non-controversial solutions exist, as we’ve sought to demonstrate here. We wish Mayor McGinn would explore such opportunities. We wish we didn’t have to spend our own money on common-sense, unobtrusive traffic calming treatments, and risk arrest installing them, in order to feel safe riding in this city.

PS: Because we we’re still polite Seattleites (even when we engage in acts of civil disobedience), we used an adhesive pad, which is removable, not epoxy, which is more permanent, meaning Mayor McGinn and SDOT can remove these in a matter of minutes, if they so choose.

To perhaps everyone's surprise, the email had an equally courteous response, which read as follows:

Thank you for pointing out some easy ways to calm traffic and provide more secure feeling bicycle lane on our streets.  Your sentiment of unease and insecurity riding on painted bicycle lanes next to high speed and high volume traffic is exactly what I am hearing from the our residents as we update our bicycle master plan.  This strong message to me and my staff that we have be more thoughtful on facility design and implementation is being heard loud and clear.  You are absolutely correct that there are low cost and simple ways to slow traffic, increase the sense of protection, and provide bicycle facilities that are more pleasant and accommodating for larger portion of people who ride bicycles.  I am truly appreciative that you care enough to take time, money, and risk to send your message to me and my staff.  It is my commitment to you that I will do my best to update our existing facilities and install new bicycle facilities that will be more thoughtful.  Some of these will be low cost, such as what you demonstrated on Cherry Street, while others will require more resources to implement.

The posts that you installed on Cherry Street will be removed and I am sorry about that.  The posts are 36 inches high and is higher than most road bicycle handle bars.  A rider can hit the post with their handle bar, which is a safety concern.  The bicycle lane narrow and is five feet wide.  The travel lane is 11 feet wide, which is what the State DOT permitted us to narrow the lane to.  Cherry Street is under the freeway and is owned by the State, so we do have to get their permission for reconfiguring the street.  If we had more lane width to work with, we could installed shorter posts.  Unfortunately, this is not the case here.  Please let me know if you would like the posts back and I will have the crew leave the post in a safe area for you to pick up. Thank you, again, for your thoughtful demonstration.

Whether any of this civil disobedience could have any effect remains to be seen,  but the stunt has raised the issue in the city and - hopefully - encouraged some constructive discussions.