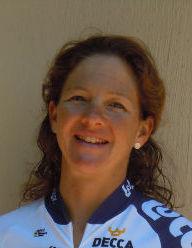 British national road race champion Sharon Laws looks likely to sit out most of the 2013 season after suffering suffered a broken collarbone as well as a compressed fracture to vertebrae in her back following a crash during the Cape Argus race in South Africa at the weekend.

The 38-year-old from Gloucestershire, who won the national championships in June last year shortly after being controversially left out of the Olympic road race team, was leading the women’s classification in the race when the incident happened, with just two kilometres left to ride of the 109-kilometre route, reports the Wilts & Gloucestershire Standard.

Laws, who has spent the winter in South Africa riding for the Momentum Toyota team, was due to return to Europe at the start of next month to ride for her new Lotto-Belisol team, although clearly it looks as those plans will now have to be altered.

Sunday’s incident during the race, which attracts 35,000 entrants making it the largest such event in the world, happened when Laws was unable to avoid hitting a male rider who had come down in front of her.

Next weekend, Laws had been due to aim for a third victory with Hanley Booyens in the Cape Epic mountain bike race. Booyens said: “To see a great friend in agony and heartbroken is never easy.

“Sharon had a horrible crash nearing the finish line of the Argus. She was out there having a brilliant ride.

“She was in front, riding aggressively and unfortunately this meant she was the first in line when one of the guys went down, sending her rocketing over him and crashing badly.

“It's a great setback at the start of her European season. Yes, she’ll need some time, but she’ll be back.”

Laws’ mother Joy learnt of the crash through the internet after going online to check the result.

“I turned on the computer to find out how Sharon had got on and was shocked to see a picture of her in hospital wearing a neck brace,” she explained. “I have had better starts to Mothers’ Day.

“I got a text from Sharon saying ‘I’m okay’. When I eventually got to speak to her in hospital on Monday morning, someone had to hold the phone as her shoulder is in a sling and she is on a morphine drip.

“She was waiting to hear when they could plate her collarbone.

“She’s a good actress and she kept from me the fact that she had compressed fractures of the vertebrae.

“The collarbone is going to take six weeks. I’m guessing the back fractures may keep her out for three to four months.

“It is ironic that with almost 35,000 riders, she thought it would be safer to be out in front.

“But with her head down riding for the finish and surrounded by a lot of burly men, I don’t suppose she could see the crash ahead of her.”

She believes her daughter will battle back to competition, however.

“Everyone in the sport knows what a fighter she is,” she explained. “To come back from the disappointment of not being selected for the London Olympic team to win the British Championship shows that.

“Accidents happen in cycling – it is an extreme sport. I don’t enjoy it, but I would always back Sharon to the hilt.”

Laws herself took to Twitter yesterday to thank well-wishers, saying: Overwhelmed by all messages, so fortunate to have such great friends. Thank you. Very sore, no movement allowed, maybe op tomorrow ‪#goingnuts.”

With Laws out of contention as a result of her crash, the women’s race on Sunday was won for the seventh time by Anriette Schoeman of South Africa, with Cherise Stander, wife of Burry Stander, the mountain biker killed by a taxi while on a training ride in January, finishing second.