Bryton have been busy. They need to be, too: the GPS market is one of the fastest-moving areas of the bike accessory market right now, and Garmin have upped their game with the phone-syncable 510 and 810, so there's a bit of catchup to play. We caught up with them at ditributor Zyro's open house event last week.

And did Bryton have their own touchscreen, bluetooth GPS unit to show us? Well, no. And yes. But anyway, more of that in a bit. Much of Bryton's work has been on their syncing software and portal website, and it shows. Both are much, much better than they were.

The Bryton Bridge application used to simply allow the website to communicate with the GPS unit. It's better than that now: there's an option to download all the rides to your computer (as TrainingPeaks/Strava friendly .tcx files or a bunch of other formats) if you're offline; handy if you want to free up space but you're not online, and also good for bulk downloading and uploading to another portal if you're already sold on one.

It also gives you the capability to update the firmware on the GPS unit; not only will it allow you to do that without going to the website but it'll automatically download relevant updates in the background so they're good to go as soon as you hit the button. 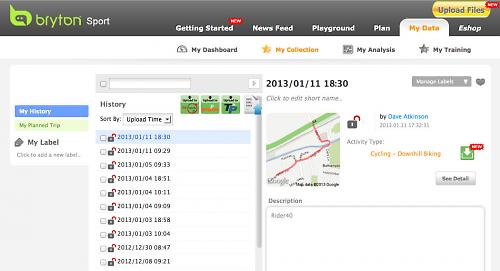 The portal itself is… well, a lot better than it used to be. It's faster, for a start, and the interface works more intuitively. There's a checkbox next to your uploaded rides that you can check and send data to Strava, TrainingPeaks or Fittrack with the click of a button even if you're using the Brytonsport website for your ride logging. If you're looking for a ride to do, you can search the site for routes in your area and download them to your device much more easily than before.

There's training and analysis options on the site too. Analysis allows you to track progress on a wide range of metrics for cycling and running, and training is a fully featured diary that shows you your logged rides and also allows you to plan your sessions. We haven't really investigated that fully yet. To go with the new website there's new computers too. The Bryton 20 (£99.99) is the company's entry-level mile logger; though it's ANT+ compatible it's limited in terms of the data it will show. The new Bryton 21 (£129.99) is the same size but you have four configurable data screens to play with, as well as two lap screens, so all the metrics you could ever want are to hand. Again, you get ANT+ to link to speed, cadence and HR sensors; you can't link up your power meter though. If you want Bryton's HR and speed/cadence sensors you can have a bundle for a penny shy of £200.

The big change on the Rider 50 since we tested it a couple of years ago is that you can now have it with OS maps, and at a pretty competitive price too: £279.99. The 50 also still has the HD streetmaps as well, and if you zoom past the 1:50,000 OS maps you'll end up in street view which gives you a lot more information at the highest zoom level. The street maps are based on the OpenStreetMap ones, which are generally pretty good. Again you can get HR and speed/cadence sensors, or link it up with the ones you already have, if they're ANT+ 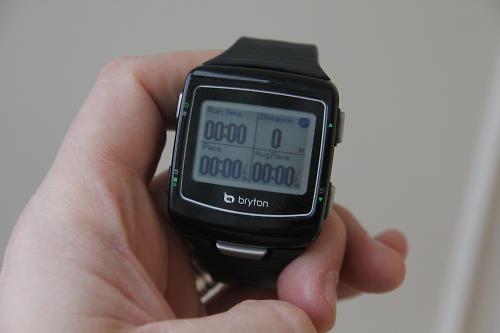 Also new are a couple of watch-based computers aimed at runners (the Cardio 40) and multisport athletes (the Cardio 60). We'll concentrate on the latter.

The first thing to note is it's very competitive on price: £219.99 for the watch with HRM (£259.99 with speed/cadence too), which is a fair chunk less than similar competing units. Also, it's really small: small enough to wear as a watch, even when you're not training. In watch mode it'll run for a month; the battery will allow you to log your training for 16 hours, which is very good considering its size. It's got all sorts of bells and whistles too. When you plug it in to upload training sessions it'll download a data file behind the scenes giving satellite positions for the next 14 days to help the GPS acquire position much more quickly. It contains an accelerometer so it can log your stride rate when you're running, and you can manually switch between modes when you're on triathlon duty. It has audible and vibration warnings – good for when you're running with music on, or swimming – and programmable interval workouts for training. There are six user-customisable data screens to keep a track on your numbers too. It's waterproof, natch. To 30 metres. 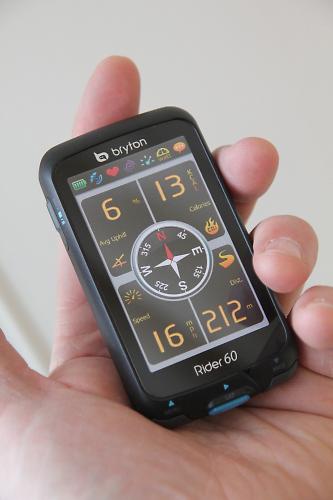 And the touch-screen, bluetooth-syncable GPS? Well, it's coming. It's called the Bryton Rider 60 and samples are coming soon. The one we saw had a pretend screen; the production version will have a 3" touch screen and it's going to be able to link to a smartphone. Presumably you'll be able to have OS maps on it too. But we don't really have much more info than that at the moment. When we know, so will you.