Fantasy Cycling is back for 2013

More races, some gameplay changes and more features for your premium money...
by dave atkinson

Fantasy Cycling. It's back with… more races, a new Style Premium competition, prizes for all, better stats, achievement badges, new functionality and lots more. Did you miss it? Of course you did.

We've been hard at work behind the scenes to make the game even better, but essentially you're doing the same thing: using your Directeur Sportif skills to pick a team of nine riders to compete in competitions through the season. You get points depending on how well they do, and your aim is to beat the thousands of other virtual team managers to land yourself on top of the pile. Or, if not that, at least beat your mates in your private league.

It's great fun and very addictive, and it's also a great way to improve your knowledge of how a bike race works. To set up your team you need to register on the main road.cc site and then head over to Fantasy Cycling where you'll be able get started. If you played in 2012, you should already be set up, and you'll find your archived results from last year on your dashboard, as well as a palmarès section listing your best results to date.

We've kept all the races from last year and added a few more. This year there's 26 races, 14 of which are open to everyone; that's five more than last year. We've made the Tour of Britain an open competition this year rather than a premium one, so everyone over here can have a go at the home-turf race.

This year you really can pick any nine riders, at least within your budget of 150 game credits. We've done away with the split between star riders and domestiques, so you can have however many stars you like. There's still a limit of two riders from any one team.

The way rider values are calculated is different too. Last year we bashed our heads together and set the values and rider types based on our knowledge and gut feeling. This year it's an automated proces: we're generating the rider values based on how they've done in the game in the 12 months leading up to a competition.

What does this mean? Well, rider values will change throughout the year: if Simon Gerrans romps off with the Tour Down Under trophy again this year you can expect him to be considerably dearer for the next race he's in. It means that the most successful riders from last year will be expensive, of course, but that doesn't mean there won't be bargains to be had. There's some very high profile riders who barely scored a point in 2012 due to injury or illness, and they'll be going cheap...

Premium is different this year

We've done a lot of work on the premium game over the closed season. For 2013 it's less about prizes – anyone can win the prizes that will be on offer this year – and more about a fuller game experience. Going premium costs the same as last year – £10 for the season – but you get more benefits. Let's look at the new features.

This year there's 12 achievement badges to unlock. They range from the really big stuff – a top ten in a competition, for example – to smaller things such as picking the last man home on a stage. Will you be able to get all 12 in 2013? here's a list of the badges:

We've got a year's worth of data in the game and we've used it to bring you better stats on all the riders in the game. You can see the current ranking (and 12-month rolling points total) of everyone in the current competition by hitting the Rankings tab in the menu. If you're a premium user, clicking on a rider's name will bring up lots more useful stats, such as their scoring breakdown across different types of stages and how they've performed in the last 12 stages they've contested. 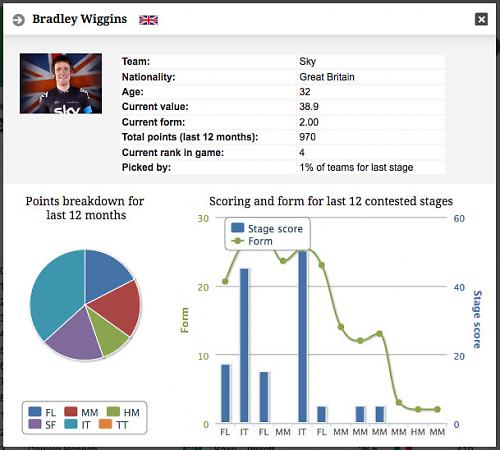 As well as seeing a rider's scoring breakdown in their stats, as a premium player you can also order riders by their total score on a certain type of stage, which is a big help if you're looking for a couple of domestiques who might shine in the hills...

Some people like to chop and change their teams throughout a tour, whereas others like to take a purist approach: pick nine and stick with them through the competition. Both are great fun and with the premium game you can now do both from one account. You get your standard team plus an extra purist team for every competition. You won't be able to make changes to your second team after a competition starts, so there's no danger of missing out on a purist ranking!

For the standard game the rollover transfer system remains the same: you can save up to two transfers for the next stage, but if you don't use them then you lose them. Premium players can bank as many transfers as they like, and they won't expire after a day. So you can save up a couple of days' worth ahead of the big time trial.

More to come, too!

There's a few extra premium benefits we're still working on, but don't worry - we'll announce them when they arrive.

Tour Down Under starts on 22 January!

Not long to go until the first race of the year: the Tour Down Under is our season opener. Get yourself registered and start thinking about your team!