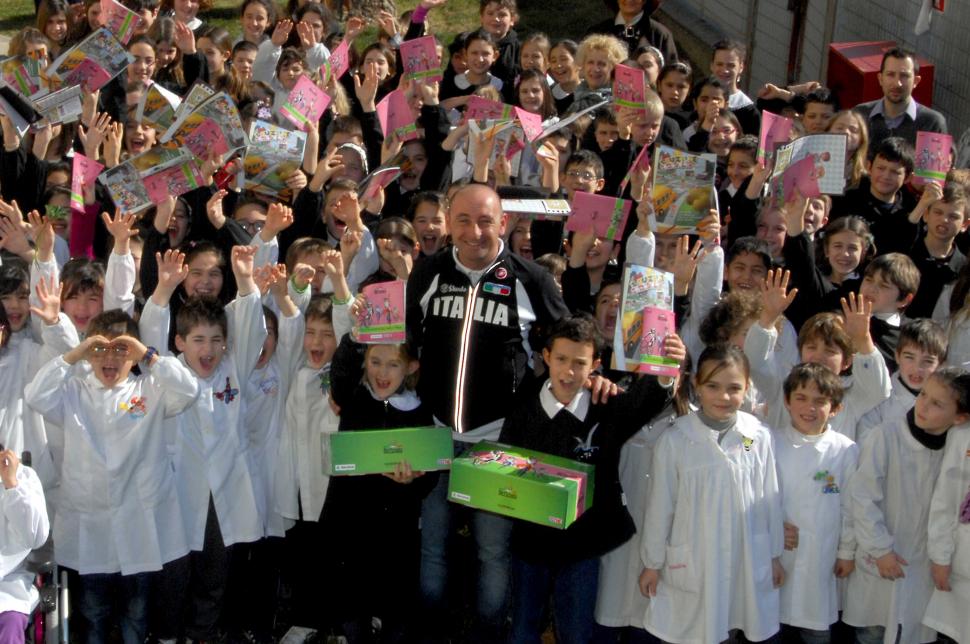 Italy's national coach sees British and Australian models as ones to emulate in bringing forward young talent...
by Simon_MacMichael

Paolo Bettini, twice world road race champion and now Italian national coach, has said that he wants to bring Max Sciandri into the national set-up to help develop young riders, as the Anglo-Italian who is currently a sports director at BMC Racing did when he oversaw British Cycling’s Olympic Academy in Quarrata, Tuscany.

The Team Sky line-up that started last year’s Giro d’Italia included four of Sciandri’s former protégés – then world champion Mark Cavendish, who is still close to his former mentor, with both having homes in Quarrata, plus fellow graduates Ian Stannard, Geraint Thomas and Peter Kennaugh. A fifth, Ben Swift, was originally due to ride the Giro but missed the race after fracturing his shoulder in a crash during a training ride.

It’s a production line of talent fuelled by an influx of National Lottery money that Bettini, who by comparison with his counterparts at British Cycling operates on a shoestring budget that leaves little scope for the governing body to develop talent itself, envies.

However, in an interview published in today’s print edition of La Gazzetta dello Sport, the man who won Olympic gold in the road race at Athens in 2004 says he is determined to make changes ahead of Rio 2016 to the Italian system, which sees aspiring riders focus on the road from their teens onwards, each with the ambition of ultimately securing that coveted professional contract.

British Cycling’s approach over the last decade was influenced heavily at least in its early stages by the model implemented by the Australian Institute of Sport (AIS), and Bettini revealed that he recently spoke to a member of staff of Australia’s national team who confessed having travelled to Italy in 1998 specifically to study how the country was producing young talent at the time and see what secrets they could steal.

The Italian was told that young riders at the AIS training centre in Gavirate, in the province of Varese – it also acts as Orica GreenEdge’s European base – are taught to look after money and are responsible for doing the shopping, as well as cleaning their apartments and their bikes. It’s similar to the British approach at Quarrata, but a million miles from the Italian one.

“Our under-23s are already professionals, they only think of racing,” Bettini laments, adding that salaries of up to €2,400 a month makes them feel that they are already champions, leading to a lack of humility.

For all the country’s history and tradition in cycling, a rethink of how Italy brings youngsters into the sport is needed, he insists, describing reported salaries of up to €1,200 a month for riders still aged 17 as “madness.”

Sciandri, Bettini believes, is one of the men who can help build his vision of what he calls ‘Team Italia,’ saying he has already put forward his name to Renato Di Rocco, president of the Italian national federation, the FCI, as a coach for the under-23s.

There are potential hurdles to overcome though – not least, the upcoming elections at the FCI which could result in a change at the top of the organisation, plus the fact that Sciandri has committed himself to his current employers.

“Max is the man who brought on Cavendish,” Bettini points out. “In the past few years he created the British phenomenon on the road, he set up a base in Tuscany, his mission is working with youngsters. Max has renewed his contract with BMC, but we can talk about it.”

Certainly, combining a team and national role isn’t impossible, even when the two aren’t so closely entwined as is the case with British Cycling and Sky, where Sciandri worked as sports director during 2010, or Orica GreenEdge and Cycling Australia.

Sciandri, born in Derby but with an Italian father, rode under Italian nationality until 1995, when he switched allegiance to Great Britain ahead of professional cyclists being allowed to compete for the first time in the Olympics the following year at Atlanta; he won a bronze medal in the road race there, and during his career also won three stages of the Giro d’Italia and one in the Tour de France, only the last of those coming after his switch in national affiliation.