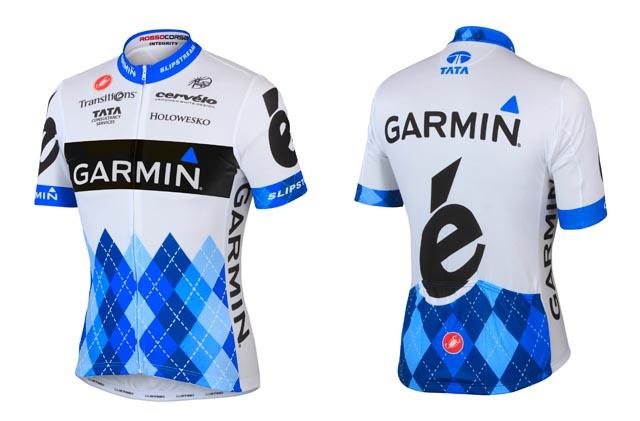 White replaces black and there's plenty of argyle on show. Needless to say, we like it...
by Simon_MacMichael

Garmin-Cervélo has unveiled a one-off kit for the Tour de France that repeats the approach taken by Cervélo TestTeam in previous years of reversing the standard kit’s black and white, although this time of course there is added argyle. Needless to say, we’re fans of that last detail here at road.cc.

Coming just a week after Team Sky revealed their own black and green Rainforest Rescue kit, there’s now no chance whatsoever of fans confusing the two teams over the next three weeks.

“We’re really excited about the Tour de France kit,” said Jonathan Vaughters, CEO of Slipstream Sports and Director Sportif, of Garmin-Cervélo. “The lighter color is perfect for hot weather and our signature argyle is more prominent.”

The limited edition kit, which will go on sale early next month, is made by Castelli, which previously supplied Cervélo TestTeam with its own one-off kits for cycling’s biggest race.

“This team is rider-centric, and Castelli has done its part to make sure the riders have the most comfortable and technically advanced clothing for this big event,” he continued.

“Racing in hot weather is physically demanding, that’s a given, and despite the fact that Castelli makes some of the lightest and coolest fabrics in existence, wearing a lighter colour will make a big difference, both psychologically and physically, to a rider’s well being,” he added.

Meanwhile the Castelli Speed Research Unit has introduced what it claims to be the first skinsuit for road racing, although Team Sky among others may say that they got there first, with riders sporting one-piece suits as far back as its debut in the Tour Down Under last year.

There’s also a new “nearly seamless” Body Paint TT Speedsuit which is said to “cut through the wind better than almost any other suit ever created,” while in mountain stages, Garmin-Cervélo’s riders will sport “an unbelievably lightweight jersey that virtually absorb no moisture so the weight savings multiply in the most extreme conditions.”