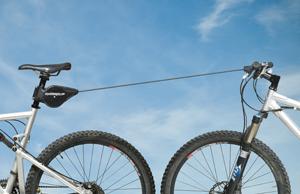 Ever wanted to take a friend for a sociable tow? Well now you can
by Simon_MacMichael

Bungeebike is a New Zealand company's solution to the problem• of bike riders of diifferent abilities going out for a ride together, with the stronger tending to leaver the weaker behind, by, you've guessed it (yes, the clue's in the name), using a bungeee cord that enables one rider to tow another along.

The housing containing the elastic cord slips over the seat post of the leading rider’s bike, and the cord can then be pulled out and attached to the handlebars of the following cyclist’s bike using a hook, with the manufacturer’s website also including an overview of the actual science behind how the simple device works.

The device was thought up by international mountain biker Patrick Meffan in reaction to "the frustration [he] experienced when he simply wanted to share a casual, sociable bike ride with his wife Wendy, his 4 boys, or his non-competitive friends, yet he still wanted to feel like he had a good ride."

According to the Bungeebike website, "What initially started out as an idea that would allow him to treat any ride as a training ride, soon became all about companionship cycling - where the slowest rider in the group was able to keep up without feeling guilty about holding everyone else up. The surprising result was that both riders felt they had a good, enjoyable, unimpeded workout together."

The makers claim that the device** means that there’s no more frustration for a stronger rider waiting for a weaker companion to catch up – as can happen say when you go on a weekend leisure ride with your other half who doesn’t cycle so much – and that it can also help with resistance training, with the Bicyclebungee shown in operation in the following video.

Obviously, what works in the car-free countryside of New Zealand might not work so well on the car-choked streets of New Cross – for a start, we can imagine the odd pedestrian seeking to dash across the street in that “gap” between the two bikes, but if you do have access to a big, open, flat and car-free space, it might be worth a go.

Of course, when we first heard of something called Bicycle Bungee, our first thought was of bungee-jumping using a bicycle, although that would never work, would it? Oh, wait a minute…

* what do you mean, you didn't know this was a problem

**not sure whether "device" isn't over-egging this one a bit, surely much the same could be achieved with a rope… but we're sticking with our new year's resolution to be nice.