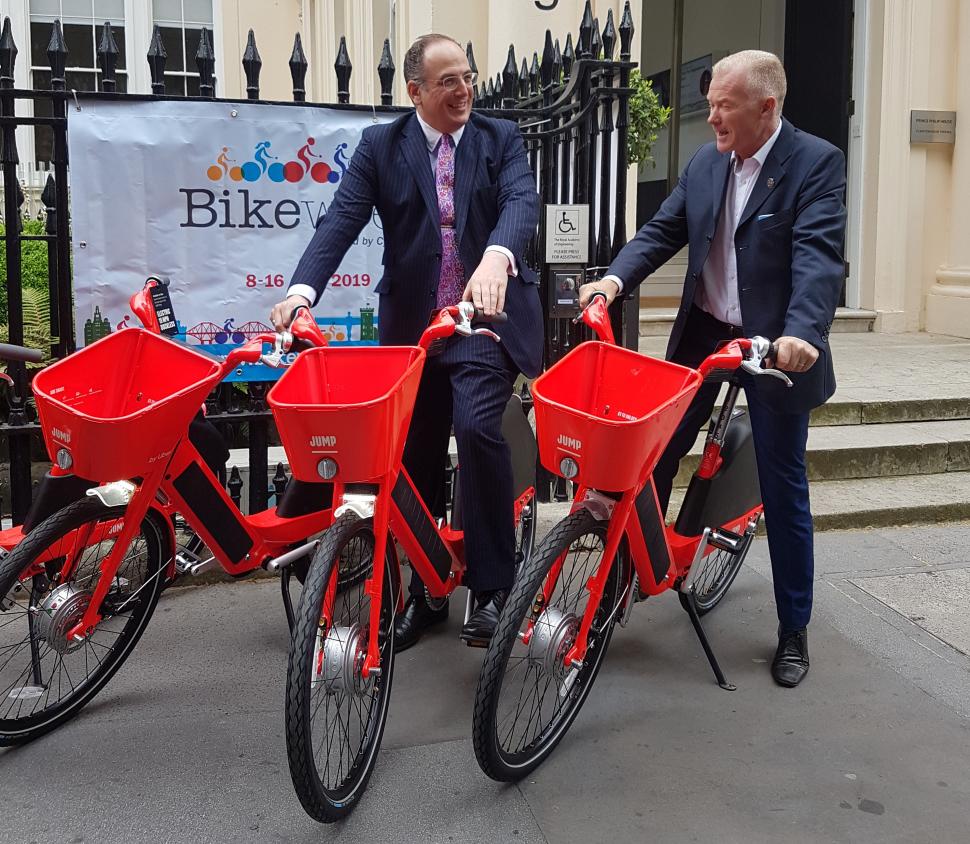 New minister for transport, Michael Ellis, MP, says he is "utterly convinced" on cycling, and will continue the work of his predecessor, Jesse Norman...
by Laura Laker

The new cycling minister, Michael Ellis MP, has made supportive noises on active travel in his first public speech in the job, saying delivery of cycling and walking plans will remain a “key priority” for government, and he will do everything he can to support them.

At the annual MP’s bike ride, which traditionally launches Bike Week, Michael Ellis, who was appointed Transport Minister on 23 May, said he is “utterly convinced” of the benefits of cycling and walking, which he described as “credible, compelling and obvious”.

Ellis, who was hurriedly shuffled from the role of culture minister just hours before Parliament went into recess, and 24 hours before Theresa May announced she'd step down as Prime minister, said he recognises the benefits cycling brings to tourism and public space from previous work, and called active travel a “vital enabler” for the nation’s health.

In a speech, Ellis called the new job “a great privilege”. He said: “I am utterly convinced of the wide range of benefits that active travel brings,” he said. “How could you not support active travel, and not just for health reasons and wellbeing but by bringing greater mobility to all and by helping to create places where we want to live and work.”

“Although my physical appearance may belie this fact, I am a keen supporter of cycling and of walking,” he said. Ellis also hopped on a Jump ebike for a quick ride during the event.

“We’re going to do everything we can to support activity, whether it be cycling, walking, equestrianism or the like,” he said.

Ellis, who is MP for Northampton North, became cycling minister after his predecessor, Jesse Norman, was hurriedly shuffled to the Treasury on the same day. He thanked Norman for moving cycling and walking up the political agenda. Jesse Norman said he was sad to be leaving the job, and wished he’d had more time in the role.

Ellis said: “I may not be quite such an experienced cyclist as Jesse but I am equally convinced of the benefits of cycling and walking; they are credible, they are compelling, and they are indeed obvious. And that’s why delivery of the cycling and walking investment strategy will remain a key priority for her majesty’s government.”

Although the government has pledged to double cycling, the Department for Transport acknowledged that on its present trajectory it will only achieve one third of its target. Campaigners say more and ongoing investment is needed, not least for the Local Cycling and Walking Infrastructure Plans, which the Department for Transport asked local authorities to come up with, without funding attached.

Campaigners want to see investment increased as part of the spending review, taking place in November. Cycling UK's CEO, Paul Tuohy, said: "Across the UK we need budget & political leadership to get more people cycling. Cycling is not just a transport issue - it’s a health issue, it’s an environment issue. With a spending review in November - now's the time to get the deal the country needs.”

Ellis noted funding for cycling has doubled from £3.50 to around £7 per head per year, over the last four years.

“I was tourism minister in my previous role and I recognise how important cycling is, for example, and walking holidays, for the tourism industry”, Ellis said, adding he opened a cycleway in Northampton and supported a bike loan scheme for a local university before he was minister.

Of course, the proof will be in the pudding. At the event, Ruth Cadbury, co-chair of the All Party Parliamentary Group on Cycling (APPCG), wished Ellis luck with his Secretary of State for Transport, Chris Grayling, and extended the APPCG’s support in forwarding the cause of cycling.

British Cycling CEO, Julie Harrington, wrote a letter of thanks to Jesse Norman, who is now ‘consulting’ on running to lead the Conservative party. If this happens, and on the off-chance he wins, it’s likely cycling would move even further up the political agenda.

Lovely letter of thanks from Julie Harrington, CEO of @BritishCycling, for my work on cycling, walking and active travel at @transportgovuk. Thank you! Such an important issue, and a huge honour and pleasure to be able to help. pic.twitter.com/ThKvbbOOPd