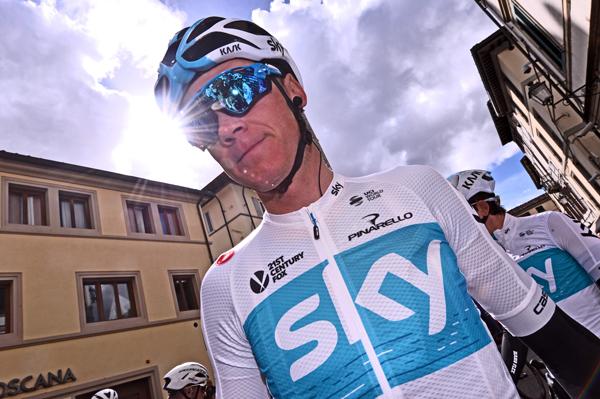 Chis  Froome has been cleared of anti-doping charges following a urine test at the Vuelta a Espana last year when he was discovered to have twice the permitted level of the anti-asthma drug salbutamol in his system. The Team Sky rider has said he had "never doubted that this case would be dismissed for the simple reason that I have known throughout I did nothing wrong."

In a statement this morning, world cycling's governing body, the UCI said that the World Anti-Doping Agency (WADA) had told it that in light of "the specific facts of the case" it accepted that Froome had not committed an anti-doping rule violation.

Yesterday,. Tour de France organisers ASO were reported to have excluded four-time winner and defending champion Froome from the Tour de France, which starts on Saturday, due to the potential damage his participation could cause to the image of the race.

Team Sky confirmed yesterday that they are confident of winning an appeal against that decision, scheduled for tomorrow in Paris.

Clearly whether or not that hearing now takes place will depend on ASO's reaction to today's news.

In a statement released by Team Sky this morning, Froome said: "I am very pleased that the UCI has exonerated me. While this decision is obviously a big deal for me and the Team, it’s also an important moment for cycling.

"I understand the history of this great sport – good and bad. I have always taken my leadership position very seriously and I always do things the right way. I meant it when I said that I would never dishonour a winner’s jersey and that my results would stand the test of time.

“I have never doubted that this case would be dismissed for the simple reason that I have known throughout I did nothing wrong. I have suffered with asthma since childhood. I know exactly what the rules are regarding my asthma medication and I only ever use my puffer to manage my symptoms within the permissible limits

“Of course, the UCI had to examine these test results from the Vuelta. Unfortunately, the details of the case did not remain confidential, as they should have done. And I appreciate more than anyone else the frustration at how long the case has taken to resolve and the uncertainty this has caused. I am glad it’s finally over."

He added: “I am grateful for all the support I have had from the Team and from many fans across the world. Today’s ruling draws a line. It means we can all move on and focus on the Tour de France.”

Team Sky principal Sir Dave Brailsford said: “We have always had total confidence in Chris and his integrity. We knew that he had followed the right medical guidance in managing his asthma at the Vuelta and were sure that he would be exonerated in the end, which he has been. This is why we decided that it was right for Chris to continue racing, in line with UCI rules, while the process was ongoing. We are pleased that it has now been resolved.

“Chris’s elevated Salbutamol urine reading from Stage 18 of the Vuelta was treated as a ‘presumed’ Adverse Analytical Finding (AAF) by the UCI and WADA, which triggered a requirement for us to provide further information. After a comprehensive review of that information, relevant data and scientific research, the UCI and WADA have concluded that there was, in fact, no AAF and that no rule has been broken.

“We said at the outset that there are complex medical and physiological issues which affect the metabolism and excretion of Salbutamol. The same individual can exhibit significant variations in test results taken over multiple days while using exactly the same amount of Salbutamol. This means that the level of Salbutamol in a single urine sample, alone, is not a reliable indicator of the amount inhaled. A review of all Chris’s 21 test results from the Vuelta revealed that the Stage 18 result was within his expected range of variation and therefore consistent with him having taken a permitted dose of Salbutamol."

Following his Giro d'Italia victory last month, Froome is just the third man ih history - the others are Bernard Hinault and Eddy Merckx - to hold all three Grand Tour titles at the same time.

Brailsford continued: “Chris has proved he is a great champion – not only on the bike but also by how he has conducted himself during this period. It has not been easy, but his professionalism, integrity and good grace under pressure have been exemplary and a credit to the sport.

“The greatest bike race in the world starts in five days. We can’t wait to get racing again and help Chris win it for a record-equalling fifth time.”

Here is the UCI's statement in full:

On 20 September 2017, Mr Froome was notified that a sample collected during the Vuelta a España on 7 September 2017 was reported to contain a concentration of salbutamol in excess of 1000ng/ml.

The World Anti-Doping Agency (WADA) Prohibited List provides that inhaled salbutamol is permitted subject to a maximum dose of 1600 micrograms over 24 hours, not to exceed 800 micrograms every 12 hours (the permitted use), and that a concentration in excess of 1000 ng/ml is an abnormal finding which is presumed not to be the result of a permitted use. The WADA Prohibited List further provides that the athlete can establish that his/her abnormal result was the consequence of a permitted use, in which case it will not be considered as an Adverse Analytical Finding (AAF).

The UCI instigated disciplinary proceedings in accordance with the UCI Anti-Doping Rules (ADR), during which Mr Froome exercised his right to prove that his abnormal result was the consequence of a permitted use. The proceedings started with an evidentiary phase, with the UCI and Mr Froome agreeing that the UCI Anti-Doping Tribunal would decide whether certain information could be provided to Mr Froome in preparing his defence. The UCI already sought WADA’s advice at that stage, during which a significant number of expert and scientific reports were submitted on behalf of Mr Froome.

The UCI has considered all the relevant evidence in detail (in consultation with its own experts and experts from WADA). On 28 June 2018, WADA informed the UCI that it would accept, based on the specific facts of the case, that Mr Froome’s sample results do not constitute an AAF. In light of WADA’s unparalleled access to information and authorship of the salbutamol regime, the UCI has decided, based on WADA’s position, to close the proceedings against Mr Froome.

Whilst the UCI would have obviously preferred the proceedings to have been finalised earlier in the season, it had to ensure that Mr Froome had a fair process, as it would have done with any other rider, and that the correct decision was issued. Having received WADA’s position on 28 June 2018, the UCI prepared and issued its formal reasoned decision as quickly as possible in the circumstances.

The UCI understands that there will be significant discussion of this decision, but wishes to reassure all those involved in or interested in cycling that its decision is based on expert opinions, WADA’s advice, and a full assessment of the facts of the case. The UCI hopes that the cycling world can now turn its focus to, and enjoy, the upcoming races on the cycling calendar.