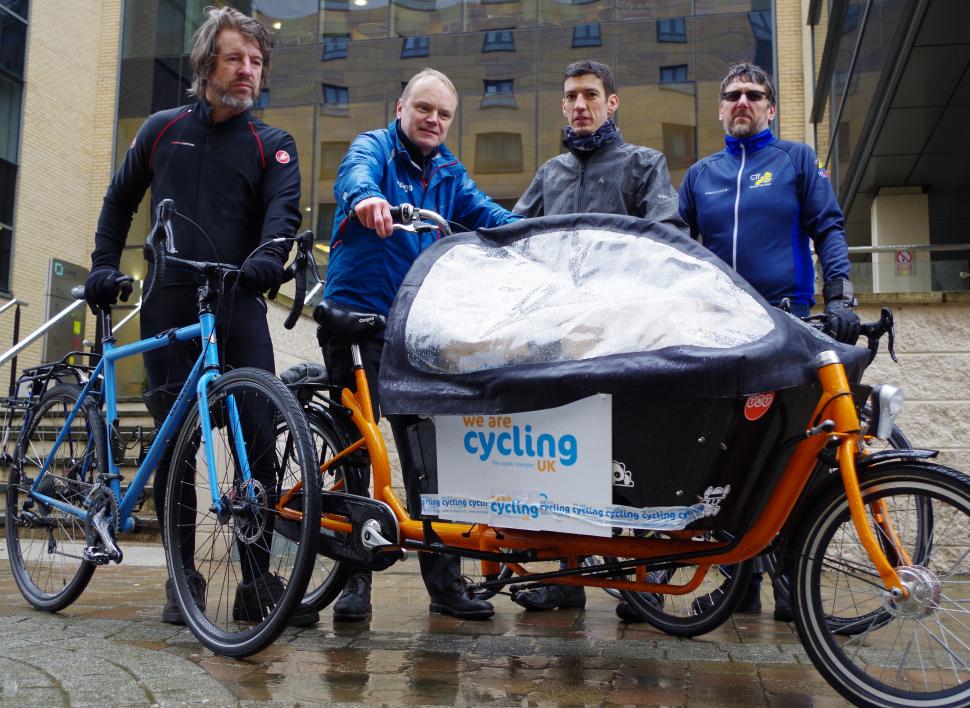 Cycling UK has delivered nearly 10,000 letters to Highways England protesting about the planned introduction of a ban on cyclists using a 15-mile stretch of the A63 near Kingston upon Hull.

The stretch of road in question includes the V718 time trial course where, in 2016, Marcin Bialoblocki set a 10-mile time trial record of 16 minutes 35 seconds.

In 2014, Sir Bradley Wiggins rode a time trial on the same course as he prepared for his successful UCI Hour Record attempt.

The letters were delivered via cargo bike to Highways England’s headquarters in Leeds today by Duncan Dollimore, head of campaigns at Cycling UK.

The charity says that the proposed ban, on road safety grounds, is not justified by evidence and that other measures such as reducing the speed of motor vehicles and signage to warn motorists of the presence of cyclists should be taken.

It is also concerned that if a ban is implemented, others could follow elsewhere.

Dollimore said: “One of Highways England’s arguments for banning cyclists is that they cannot keep up with traffic, but they’re not banning slow-moving vehicles like tractors, farm vehicles or horse and carts.

“If they ban cyclists because they cannot keep up with the traffic, then they’re going to be banned from every A-road in the country and large sections of B-roads.

“It’s a nonsensical piece of logic and if Highways England wants to come up with reasons why cyclists shouldn’t be riding on this road, they need to come up with some evidence-based reasons.”

He added: “This sends a strong message to Highways England, one we hope it will listen to carefully, and reconsider plans which would be in stark contrast to its own Cycling Strategy which sets out a cycling vision of contributing to a high-quality cycling network, suitable and safe for everyone.”