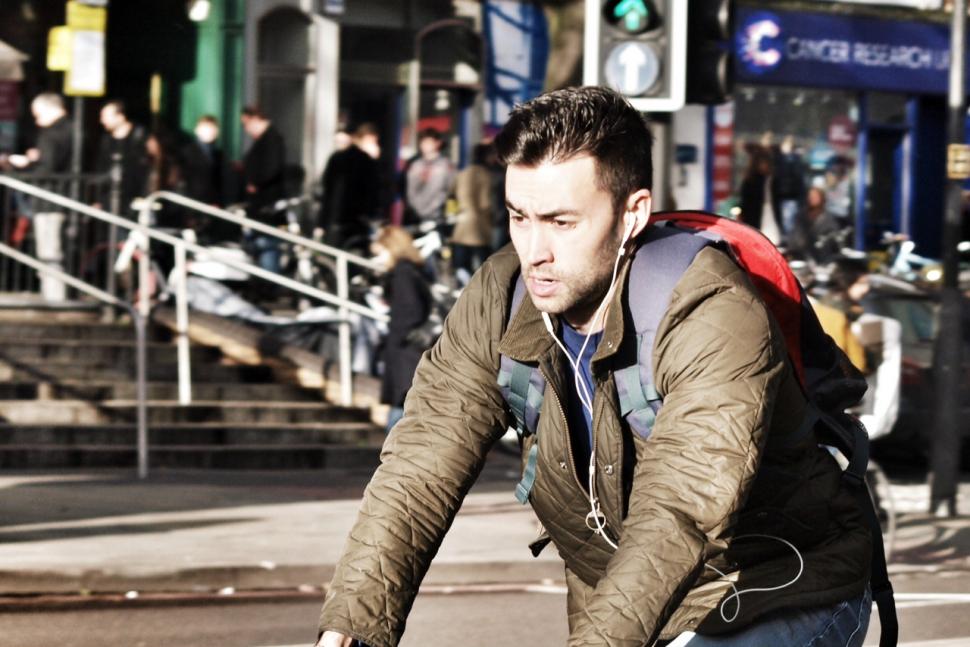 People outside countries with good quality cycling infrastructure are at even greater risk if they listen to music while riding, researchers say
by Simon_MacMichael

A study conducted in the Netherlands has concluded that cyclists who listen to music through headphones or talk on their mobile phones while riding their bikes may be putting themselves at risk.

Published in the Journal of Accident Analysis and Prevention, the study did, however, observe that when it came to teenage cyclists, there was no such correlation.

Its authors suggested that cyclists listening to music or talking on their phone in a country with less cycling infrastructure than the Netherlands might be more at risk.

1 – the auditory perception of traffic sounds, including the sounds of quiet (electric) cars

2 – the possible compensatory behaviours of cyclists who listen to music or talk on their mobile phones, and

3 – the possible contribution of listening to music and talking on the phone to cycling crashes and incidents.

It concluded: “Results show that listening to music and talking on the phone negatively affects perception of sounds crucial for safe cycling.

“However, taking into account the influence of confounding variables, no relationship was found between the frequency of listening to music or talking on the phone and the frequency of incidents among teenage cyclists.

“This may be due to cyclists’ compensating for the use of portable devices.”

The authors added: “Listening to music or talking on the phone whilst cycling may still pose a risk in the absence of compensatory behaviour or in a traffic environment with less extensive and less safe cycling infrastructure than the Dutch setting.

“With the increasing number of quiet (electric) cars on the road, cyclists in the future may also need to compensate for the limited auditory input of these cars.”

The issue of cyclists wearing headphones is sometimes addressed at coroner’s inquests where the deceased was killed while riding a bike.

In an inquest held in December 2016 following the death of Emily Norton in Howden, East Yorkshire, the coroner said: "I cannot determine if she was on her iPhone listening with earphone at the time, but if she had been, it could have caused a distraction and could have contributed to the cause of the accident."

In response to that case, both the road safety charity RoSPA and campaign organisation Cycling UK said that they discourage cyclists from wearing headphones.

Kevin Clinton of RoSPA said: “Hearing is an important sense when cycling as it gives riders warning about the approach of nearby vehicles and an idea of their speed. We advise cyclists not to wear headphones when riding.”

Cycling UK’s Duncan Dollimore said: “Our view is that wearing headphones is inadvisable, particularly if listening at high volumes or with headphones that completely shut out sound, but the idea that headphone wearing cyclists are any more of a problem than headphone wearing pedestrians is not borne out by any evidence we have seen.”

Occasionally, the prospect of a ban on cyclists wearing headphones is floated, for example by Boris Johnson when he was Mayor of London, reacting to the deaths of several cyclists in the capital in late 2013.

> Government 'will not legislate' for Mayor of London's cyclist headphone ban

Many cyclists who choose not to wear headphones take the view that as vulnerable road users, they should avoid doing anything that might impair their awareness of the environment surrounding them.

But others maintain that they feel quite safe riding with them, and that a ban using headphones while riding would be akin to telling deaf people that they aren’t allowed to cycle.

Meanwhile, no-one talks about banning motorists from listening to music - something that can have fatal consequences for others.