What did Eurobike tell us about the fixie craze you ask? Well, for a start it doesn't look like it is a 'craze' any more. From what we saw at Eurobike, (which may not give an entirely accurate representation, after all a lot of europeans still enjoy wearing pastel coloured sweaters draped over their shoulders), fixies have grown brakes and a free wheel. This doesn't mean the death of fixed gear bikes, we just had to dig a little deeper to find them.

Compared to last year the major manufacturers were offering a very pared down selection of one geared wonders and instead of being proudly displayed at the front of the exhibitors booth as a symbol of how cool they were, they were tucked in amongst the other bikes as another option. It is widely accepted that there is a huge market in low maintenance one gear bicycles without it having to be fixed gear or following a fashion. The fixed gear and single speed market has now established itself into a few different genres; Track, trick, town and road. So it's not a craze, but it's here to stay.

Bianchi had a good representation with their Pista Sei Giami track bike, the flat bar pista dolmine, their popular classic Pista,  and the vintage looking Pista via Bera, the only one they didn't have in their range was an out and out trick bike, maybe next year?

The fixie tricks or freestyle bikes are definitely a newly accepted sibling of the fixie family and one that is growing in strength in both numbers and resisting breaking! This movement seems to be developed by older skaters and BMXers who are looking to get a bit more fun out of their town hacks. The amplitude of tricks now performed means that standard road parts are being annihilated so, needless to say parts are being borrowed from BMX. Cranks, stems, seat posts and seats are all adapted BMX parts and BMX companies such as Volume and Haro are all part of the scene. Tyre clearances have been broadened to accept fat 35c tires, steel 3 piece cranks are standard place with micro drive 25 - 9t gear ratios All city bikes trick fixie had AD990 lug holes to fit brakes front and rear, indicating that these adapted tarmac bikes could be used with a freewheel? 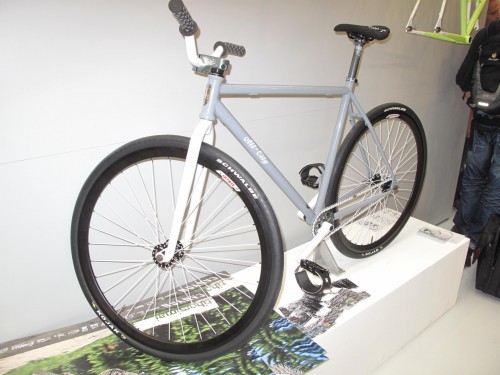 NSbikes, who are best known for their  MTB jump bikes had possibly the best looking production 700c trick bike available, the analog, all colour coordinated in taupe.

To meet the demands for tougher, stronger components for the Fixie trick market, hub supremo's Phil Wood have produced an extreme hub. It is essentially their rather delicious hubset on steroids. Bigger axles, bigger bearings and bigger flanges, all to go with your bigger balls.

The nicest bike on the De Rosa stand in my opinion was their De Rosa Scattofisso Ti track bike, far more palatable than their glitter painted road bikes, a classic looker. A pricey one too no doubt.

Giant must have actually paid some attention to what people are riding and what they want. Ditched are the over sized aluminium frames of their previous years and have manufactured a very nice new steel Bowery 72. Fitted with track bars but with road brakes, it was a supplied as a competant single speed road bike that would convert nicely into a fixed gear urban crusader. Clip on cable guides are always a nice thought and the sloping compact geometry top tube may suggest that this bike can be playful when asked. Another nice feature is the bevel wheel adjustable rear drop out. This is the mainstream bike to look out for next year. We liked the clear lacquer finish too - you can see the heat marks from the welder's torch – that's confidence for you (I'll add some pics of that later - ed).

To match the simple and retro look and keeping things colour coordinated of course, component manufacturers are now painting every thing rather than anodising, you can make your entire bike pink or flourecent yellow if you wanted without having to take it to the sprayers!

We said that steel bar and stem combo's would be common place for 2010 and we may have been a bit early on that one because there are lots to choose from in 2011 from the likes of Identity and Leaf cycles etc.

one piece bar and stem combos 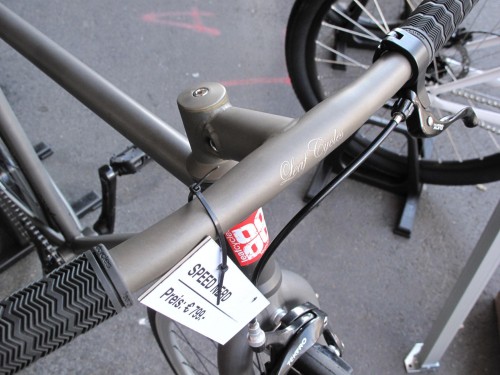 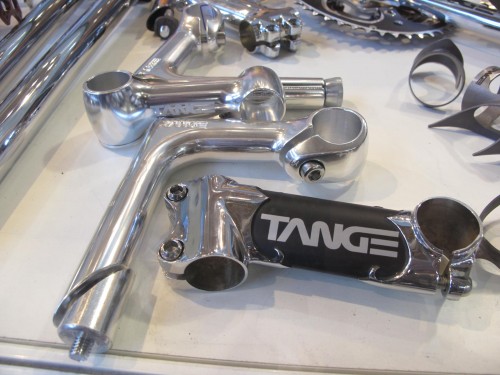