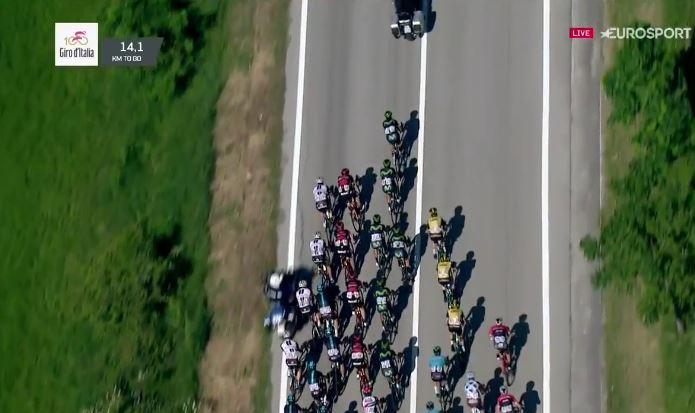 Video: "It shouldn't happen" - Geraint Thomas on crash that has wrecked his Giro d'Italia hopes

Geraint Thomas says the crash towards the end of today’s Stage 9 that saw him plummet from second to 17th in the overall standings at the 100th Giro d’Italia was “ridiculous” and "shouldn’t happen."

The overall contenders and their key support riders were racing for position ahead of the climb of the Blockhaus, the group spread out across the road, when a rider in front of Thomas hit a police motorcycle that was parked at the roadside.

Thomas and Team Sky co-leader Mikel Landa were among the riders to come down, as was Orica-Scott’s Adam Yates and Wilco Kelderman of Sunweb – the latter already confirmed as having had to abandon the race.

“We were all racing for the bottom of the climb then next thing I know, someone in front of me hits the motorbike and you go down.

“My shoulder, it popped out as well,” added the Welsh rider.

“I felt good but then I crashed and that was it, race over. It’s really disappointing.”

"It's ridiculous, it shouldn't happen!"@GeraintThomas86 furious after being wiped out by a police bike #Giro100 pic.twitter.com/ld5QD6aBnA

“The motorbike shouldn’t have been there, frankly, I think we all see that,” said Team Sky principal Sir Dave Brailsford after the stage.

“I’m sure the guy who was riding the motorbike sees that too and I’m not sure he’ll be feeling too great.

“But I do think we need to go back and have a look at it and ask the question, ‘Why did it happen?’ – but we fight on.”

"We fight on"@TeamSky chief Dave Brailsford on the crash that wiped out his team #Giro100 pic.twitter.com/8qiZDYJslW

Thomas lies 5 minutes 14 seconds behind new race leader and today's stage winner, Movistar's Nairo Quintana. Yates is one position ahead of Thomas on GC, but is now 4 minutes 49 seconds behind the Colombian.