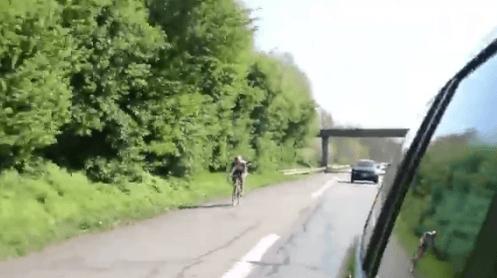 A rider taking part in Paris-Roubaix yesterday has explained how he came to be escorted off a motorway by a Gendarmerie patrol after he strayed onto it as he headed towards the finish having abandoned the race.

UAE Team Emirates rider Andrea Guardini, a past Giro d'Italia stage winner, was filmed riding along the hard shoulder of the road by Quintin Couckuyt, who posted footage to Twitter with the caption; "Guardini knows the quickest way to Roubaix: the motorway."

A picture of Guardini’s Colnago bike inside a Gendarmerie van was also posted to the social network, giving rise to rumours that the 27-year-old former Astana rider had been arrested.

That prompted him to post a message to Facebook in which he said it was “better that I tell you first-hand how it all went.”

He related how, at the second food stop, which came with 14 sectors of pavé remaining he had been instructed by team management to abandon the race and head to the finish. “I took them literally,” he said.

With the course of the race zig-zagging a further 68 kilometres across the countryside of northern France and Guardini planning to head to Roubaix on a more direct route, he said: “I would have arrived 40 minutes ahead of the others if I hadn’t found myself on a high-speed road.”

He continued: “Luckily the Gendarmerie found me and took me to their barracks. I really must thank them truly from my heart for their hospitality, they even let me watch the end of the race … they were very kind.

“From there, I was able to contact my wife, who got in touch with the team through a few phone calls, who came to get me.

“They’re still taking the piss,” he continued, “who knows what I’ll have to do to clear my name, but you should all know that I wasn’t arrested!”

My criminal file is still unblemished, we all had a big laugh about it and I can say I have an original story to talk about from my career!”

He added special thanks to one of the team’s masseurs, Mirko, for coming to retrieve him, and also revealed he had left the Gendarmes who came to his help a lasting memento of the day – his jersey, complete with race numbers.

We’re guessing the road he found himself on would have been the A23 autoroute, which is used during the race by team buses and other vehicles heading from the start in Compiegne to the finish, as well as fans hopping from sector to sector to watch the riders tackle the pavé.

By pure coincidence, earlier in the day the race’s official Twitter account had retweeted a picture posted by Guardini himself of the roadbook. Perhaps next year, they could include the IGN 1:25,000 map of the area with his copy to help him navigate the roads better?