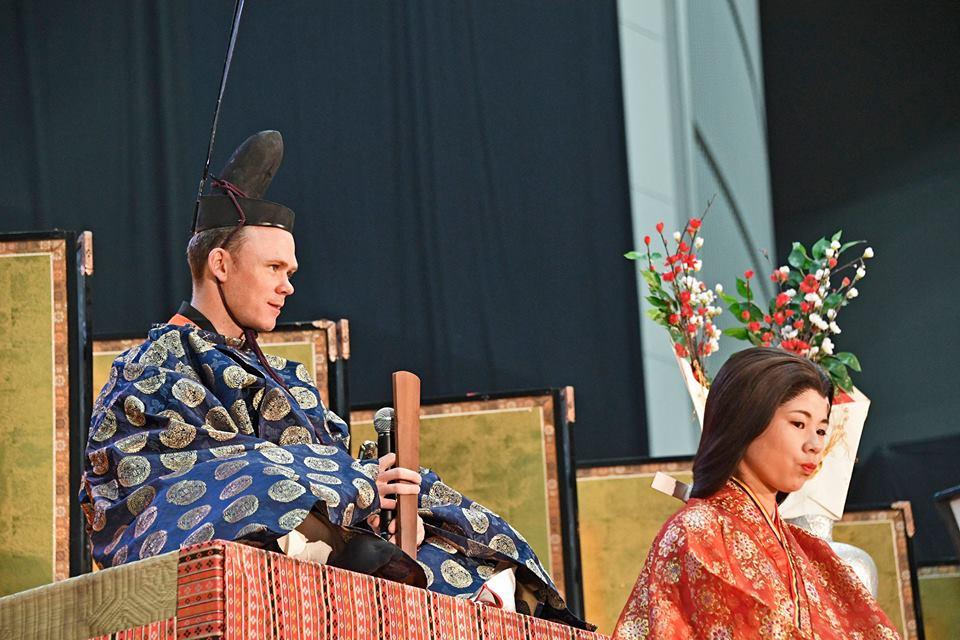 The Sagan Samurai - and Chris Froome in the yellow kimono

Tour de France champion Chris Froome and world champion Peter Sagan, winner of the green jersey in the last five editions of the race, have donned kimonos in colours matching the jerseys they won in Paris this summer ahead of their season finale in Japan tomorrow.

Along with other riders, the pair donned a cycling interpretation of the garments - complete with Team Sky logo in Froome's case, white for best young rider Adam Yates and polka dots (yes) for king of the mountains winner Rafal Majka - in a media day ahead of the fourth edition of the Tour de France Saitama Criterium which takes place tomorrow, with photos posted to social media.

They also wore more traditional - in fact, historic - versions of kimonos in a parade through the centre of Saitama ahead of a pretend imperial wedding ceremony, with Romain Bardet, Marcel Kittel, Yates, Majka and Sagan wearing ones usually reserved for ministers, while the pattern on Froome's was one that only the emperor is allowed to wear.

The honour was not lost on the Team Sky rider, who admitted he "felt a real pressure... not even Obama got to wear a kimono like this!"

There's a gallery of the best pictures of the day on the Tour de France Facebook page.

The riders also cooked and ate the traditional Japanese New Year cake known as Mochi, made from rice dough - though they were spared the usual task of having to pound the dough for two hours beforehand, instead posing with the mallets used for the task.

"I've never eaten anything like it in my life," said a sceptical-sounding Kittel. "But it's actually lovely."

Didi the Devil is out there too. We're not sure what the story is behind this picture, but it has got us wondering whether the child is called Damian.

1
New Shimano 105 R7100 groupset goes 12-speed, Di2 and disc brake only
2
How does this work!? Crazy half-wheeled bike concept goes viral
3
Cyclist killed after being struck by van driver during time trial
4
Lone female cyclists are “being targeted”, says former Scottish champion
5
“How would you like to be on camera now?” Shirtless driver accosts CyclingMikey
6
Near Miss of the Day 790 updated: Cyclist gets ANOTHER close pass from same taxi the day after punishment pass
7
UCI “kindly requests” that riders stop using race number sleeves
8
Near Miss of the Day 791: “Careful lad,” says van driver parked in bike lane… as another driver pushes in front