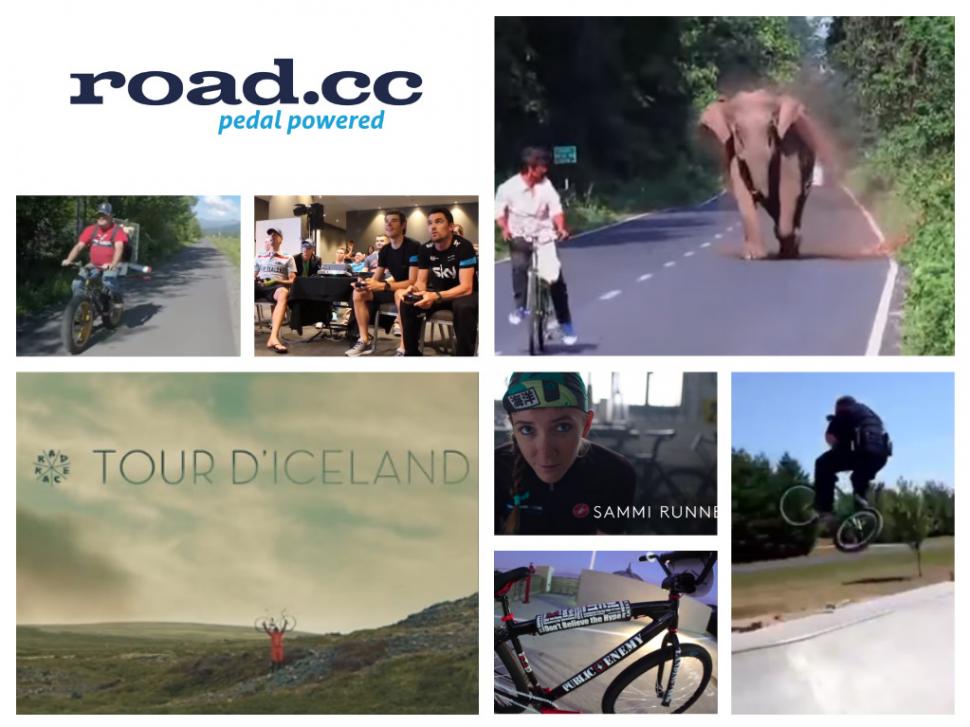 What better way to enjoy a post-#mycyclingweekend Saturday ride than to chill out infront of a selection of the finest cycling videos the internet's had to offer this week?

We've already asked you - in a totally non-pervy way - to send us photos of your legs this weekend, but we've got a few more questions for you.

First up: what would you do if you were being chased by an Elephant? Then, who do you think would win in a game of FIFA between the guys from Team Sky and Orica GreenEdge? How about, can you make cookies while cycling? And finally, is it a good idea to attach a propeller to the back of a fat bike?

We've got the answers - kind of - to those  questions and many more in today's video round-up. They're all below for you to feast your procrastinating Friday afternoon eyes on.

So, we already know that cycling will save you money, save your deteriorating health, save the environment, but did you also know it'll save your life in the face of a charging elephant?

Elephants have a max speed of around 40km/h, which is quite achievable on a bicycle, if you've been riding a while, the terrain's on your side and you've got a 3000kg elephant bearing down on you.

Our favourite part of this video is the sympathy we get to feel for the big scary elephant, who it turns out was only trying to clear the way so its babies could cross the road safely. Bless.

Last year's ultimate "the Ashes of cycling" showdown pitted British Team Sky against their Aussie counterparts Orica GreenEdge in a series of bizarre competitions to prove which team was better at... well everything except for cycling.

This year they've brought that competition back for a one-off showdown on the virtual football pitch.

Trying their collective hands at FIFA 16, which is the world's most popular football simulator game, the two teams went head to head.

The final result was an amicable draw, but one which felt a bit too contrived for us Brits. We'd rather beat the Aussies at every opportunity we get.

Having spent our fair share of time at skateparks in our collective youths here at road.cc, we know most encounters with policemen at these establishments don't end anywhere near as well as this one.

Rather than berating a bunch of children - though there's no evidence to suggest any of them were doing anything wrong - this police officer decides to join in on the fun, showing off some rather impressive skills.

More of this, please.

"In our strange way of life
the ideal of happiness
includes a bike and some friends.
That's all we need."

Those are the words that begin this touching documentary that covers the Aurora Collective's farewell ride for their friend Sebastian who died in an accident in 2015.

Rather than taking the normal loop tour of Iceland, the group decided to ride 180km of gravel roads from north to south.

The rest is beautifully laid out in this documentary.

It is possible, seriously. All you need are some crazy cycling skills and the ability to make some mouthwatering cookies.

13-year old Lotta Mansfield clearly has both of those abilities in spades. Check her out on her rollers making cookies.

We wouldn't recommend doing any frying while you're on rollers though, Lotta, things can get more than just messy should you throw a wobbly.

We covered Red Hook Crit quite extensively a couple of months ago following the monumental crash that took place after a motorcycle stalled on the track.

One of the things we missed, though, was the rivalry between Ash Duban and Sammi Runnels that's been steadily heating up since they first met in a sprint to the line in 2011.

The sound of carbon

If you've ever asked the question "how do they make carbon frames?" or the slightly more obscure "what does it sound like when people are making carbon frames?" this video is for you.

We think it's beautiful, both in its visuals and its sound.

Is it a good idea to attach a propeller onto a fat bike?

It's a question that's bothered cyclists for... well, it might be bothering you now because it's a ridiculous idea.

As far as we see it, the potential marginal gains you're likely to receive from such a contraption are heavily outweighed by how downright dangerous having spinning blades on a vehicle that shares space with other vulnerable road users is.

If we were witnessing this in some bizarre wilderness challenge we might be thinking differently about its prospects.

But so far, we just think it's mad.

That's right, we got it in.

If you feel like you're a public enemy on the roads, why not check out this collaboration between American hip hop group Public Enemy and bike manufacturer SE Bikes.