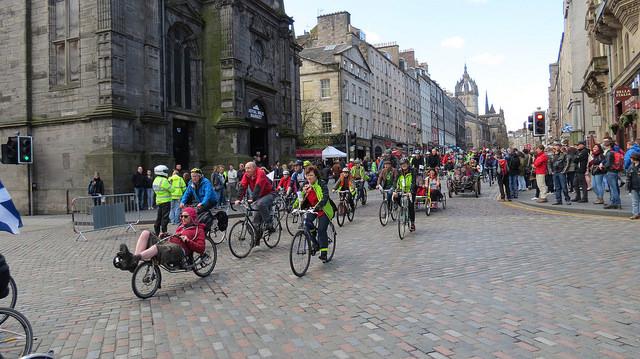 Record numbers turn out for 2016 Pedal on Parliament

This year’s Pedal on Parliament saw thousands of cyclists campaign for greater investment in active travel by taking part in mass bike rides across Edinburgh and Aberdeen. The annual event was said by organisers to have been the biggest yet.

Participants were calling for 10 per cent of the Scottish Government’s transport budget to be invested in active travel. The Edinburgh part of the demonstration was led by the Fife Talking Tandems, a group that pairs visually-impaired stokers with sighted captains. Political party leaders Kezia Dugdale, Willie Rennie and Patrick Harvie also took part, along with Transport Minister Derek Mackay.

Speaking at the subsequent rally outside the Parliament building in Edinbrugh, one of the organisers, Denise Marshall, said: “The funding increases we’ve seen are not enough – every day I experience close passes because people are human – we need to follow Sweden and introduce a goal of no deaths on the roads.”

"This election is about the sort of Scotland we want to live in. With obesity rising, pollution choking our cities and increasingly destructive storms battering our shores, it's clear that we cannot continue simply building more roads and increasing our car dependency.

"Our politicians need to choose a different path and follow countries like Denmark and the Netherlands in creating people-friendly towns and cities where everyone can walk or cycle if they want to, something that will benefit us all.

"Pedal on Parliament's manifesto offers a clear path towards that end and we encourage politicians of all parties to adopt its aims."

Mackay said: “We will match current record spending on active travel, revisit the CAPS (Cycling Action Plan for Scotland) and implement the walking strategy.” He also reaffirmed the government’s aim for ten per cent of journeys to be made by bike by 2020.

Labour’s Sarah Boyack said the party would “work towards ten per cent of funding for active travel” adding that the target could not be reached without investment. She also said that the party would bring more space for cycling in towns and cities.

For the Liberal Democrats, Willie Rennie said: “I want to make a firm commitment for the Lib Dems of an extra £20million of spending on active travel to meet that ten per cent of journeys by bike because it’s not enough now. We can make a change now and reach that target. ”

Speaking for the Conservatives, Miles Briggs emphasised safety for all road users “be they on two or four wheels.” He said that Scottish Conservatives wanted to see investment in active travel and the development of “at least one segregated cycle route in each Scottish city linking outer city limits to the city centre.”

For the Greens, Alison Johnston called for presumed liability and announced that the party would invest ten per cent of the transport budget on cycling and walking.