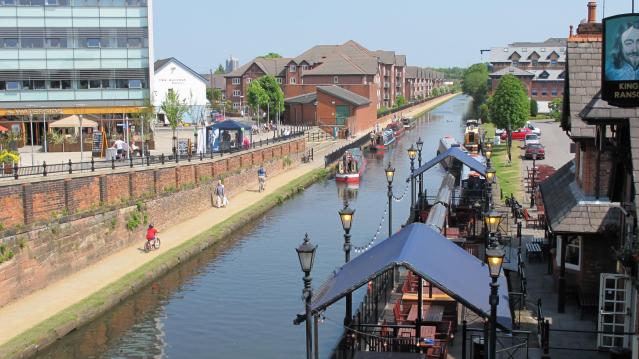 Two new cycle routes in Trafford and Coldfield are now open to the public.

The routes are both part of the Sustrans' Connect2 project, a UK-wide scheme bringing new walking and cycling routes to local communities from Dumfries to Weymouth.

In Trafford, the Bridgewater Way scheme was opened after a week of events along the canal. This new route provides a path for commuting and leisure use from Sale to Stretford. It also reinvents the historic canal towpath as a sustainable travel route for Trafford and it is the first Connect2 scheme in England to be completed.

Dylan, Ollerenshaw, a Sale resident said, "I use this route regularly when I go to work on a morning – I cycle it – it's a smooth path and a really good one. If I didn't have this I'd have to go down the main road, which is a lot of effort with lots of stopping and starting and far more dangerous."

Sustrans chief executive Malcolm Shepherd, who attended the opening ceremony of the Bridgewater Way, said, "It's the first English scheme to be completed and the second scheme across the UK. With many schemes now on site this whole project is really taking shape. This is a cracking scheme. There were a lot of people already using this route and I've talked to some users. They were very supportive and said how this is changing their lives. People bring their children out with them along the canal now – it's very encouraging to hear such positive feedback about our work."

Meanwhile in the Midlands, a huge public event was held to open the New Hall Valley section of the Birmingham to Sutton Coldfield scheme. With over a thousand people on the route for the day, the community was out in force to make use of their new path and join in the celebrations.

Sustrans area manager Edward Healey said, "This vital section of route will transform how people in the area can travel locally and more sustainably. Being able to leave our cars at home a little more and get about on foot or by bike is a key way that we can all do our bit for our environment."

Sustrans' Connect2 won a public televised vote in 2007 and was awarded a £50m award from the Big Lottery Fund to realise this project.