If Wilier's Lavaredo rides as fast as it shot through our office into the hands of our tester it's going to be a very spritely machine indeed.

Wilier's Lavaredo fairly scorched out of it's box and into the waiting hands of our tester, Stuart so fast it's a wonder the pictures aren't blurred – if it is anything like as quick out on the road our man is in for a treat indeed.

Of course when it comes to delivering bangs per buck performance there has long been an argument in favour of aluminium over carbon and one that for a long time tipped slightly in favour of aluminium – certainly on performance criteria if not fashion. Carbon though has been getting cheaper, and the cheaper stuff has been getting better too… so will the Lavaredo be able to fly the flag for metal-framed bikes? 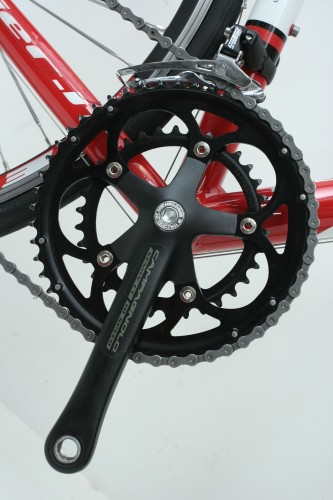 Well, if it doesn't it won't be for lack of trying – the Lavaredo is built up with with a mixture of 10spd Campagnolo Mirage, Veloce and Xenon componentrywith a good smattering of Miche kit in the mix too: shifters, front and rear derailleurs are Mirage, brakes, Veloce, and the crankset Xenon. Wheels and bottom bracket are from Miche and Ritchey supply the handlebars, stem and seatpost.

At the heart of the bike is a triple butted aluminium frame with a claimed frame and fork weight for the medium of 2Kg (4.4lb) – respectably light. According to the road.cc scales our test bikes weighs 9.1Kg – a nudge over 20lb, again a pretty respectable weight, the similarly priced Genesis Equilibrium came in at 9.3Kg. Although the latter is steel in many ways that is the bike the Lavaredo is competing with, both are priced with the ride to work scheme in mind and on the face of it, like the Genesis the Wilier is specced for durability too – that Miche wheelset looks like it will laugh in the face of even British potholes.

Undoubtedly where the Wilier will score for many is on its looks – Wilier always make a good-looking machine and the Lavaredo is no exception. Judged on the combination of its looks and spec straight from the box the Lavaredo seems to promise the durability of a good all rounder: a training and commuting bike that will do the job in style. Can it back up the promise of that racey paint job with racey performance? We'll find out soon.