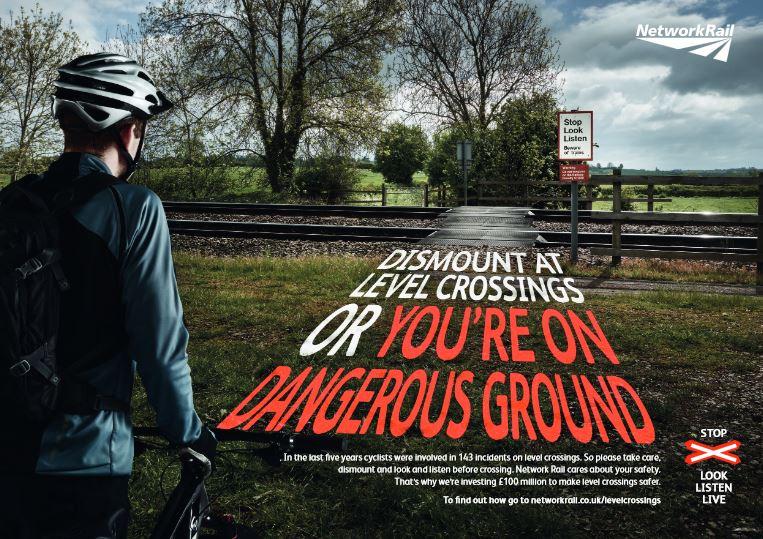 Riders urged to dismount at footpath crossings, remove headphones, and be aware that other trains may follow
by Simon_MacMichael

Network Rail has unveiled a new campaign supported by Sustrans that warns bike riders of the dangers they can face at level crossings – with advice including dismounting at footpath crossings, and stopping when lights at crossings are amber, meaning a train is on its way.

Cyclists are also advised not to wear headphones, which can prevent them from hearing a train, as well as being aware that more than one train may be coming and not to rely on timetables to try and anticipate when the track may be clear.

According to Network Rail, during the past five years there have been approximately 140 incidents in which cyclists have experienced near misses or worse when using level crossings, with four of those resulting in the death of a rider.

Victims include Adrian Smith, killed when he was struck by a train at the Cattishall level crossing in Great Barton, Suffolk in March 2013.

A coroner’s inquest recorded a verdict of accidental death, with the train driver involved telling the court Mr Smith had been wearing headphones and was looking the wrong way.

In 2013, a woman from Cambridge was cautioned by British Transport Police after CCTV showed her almost get hit by a train as she attempted to ride her bike across a level crossing as it approached.

Network Rail’s 100 level crossing managers will visit cycling clubs and groups throughout Britain to get the safety message across, as well as looking to make leisure cyclists aware of it. 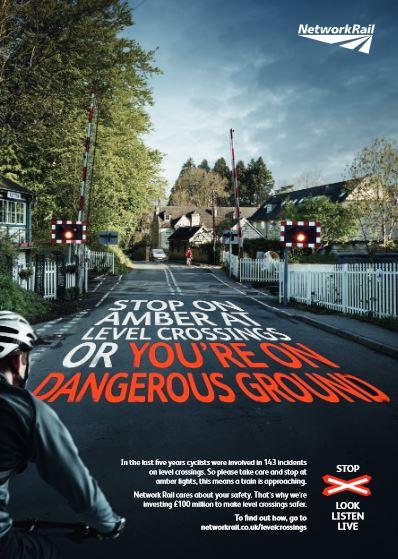 One level crossing manager, David John, said: “As a keen cyclist myself, I know the hazards that riders encounter every day.

“Level crossings can sometimes seem to be a hindrance, but to keep safe we’re reminding cyclists to stop when the flashing amber lights come on as a train will soon coming through, and to dismount at footpath crossings.

“I know getting off the bike isn’t always ideal but I do this to make sure I can safely stop, look and listen to check no train is coming, and to protect my bike as I wheel it across.

“We’ve seen quite a few cyclists get their wheels stuck while crossing the tracks, so this will help keep your bike as well as you safe.”

“With there being thousands of level crossings on roads and cycle routes, it’s important that when the public are out and about this summer enjoying the Sustrans Network they are aware of how to use these crossings in a safe and sensible manner.

“Level crossings can be confusing to people who aren’t used to using them, but by following a few simple rules people can learn how to cross them with safety and confidence.”

Network Rail says it is investing £100 million by the end of the decade to make level crossings safer, and has already closed 950 crossings during the past five years.

As part of the programme, it has been replacing footpath crossings with footbridges, as well as putting warning lights in place at remaining ones and introducing technology such as radar to detect obstacles, safety camera enforcement vans, plus spoken warnings to alert people that “another train is coming” when the first train has passed.