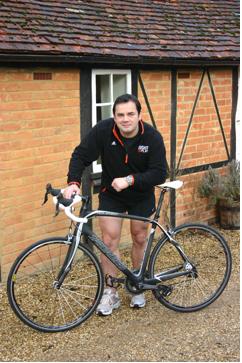 Will Carling and Zinzan Brooke to ride 2010 London to Paris

As former England rugby captain Lawrence Dallaglio heads from Twickenham to Cardiff on the latest leg of his Cycle Slam charity ride, one of his most illustrious predecessors in the post, Will Carling, has announced that he will head off in the opposite direction as he takes part in this year’s London to Paris ride.

Joining him will be All Black legend Zinzan Brooke, who as we reported recently is currently accompanying Dallaglio on the London-Cardiff-Dublin legs of his endeavour on a BMC bike lent to him by Evans Cycles, who has clearly been bitten by the biking bug.

Carling skippered England for eight years from 1988, with the side winning three Grand Slams under his captaincy and losing to Australia in the 1991 World Cup Final at Twickenham.

In undertaking the ride between the British and French capitals, Carling aims to raise money for the international charity, Right To Play, which uses sport to improve the lives of vulnerable children around the world by boosting their leadership skills, teamwork and self-confidence and fair play, as well as promoting development, health and peace.

Carling, who will be riding the event on a Specialized bike, said: “The L2P is the Six Nations of cyclosportives and it’s going to be every bit as tough and demanding as a bruising encounter at Twickenham. But I’m training hard and we’re determined to make it to Paris.

“If it’s tough out on the road for us, all we have to think about is the young people we’re cycling for,” he added. “Children across the globe face unimaginable hardships and through Right To Play we use sport as an educational tool to make a significant improvement to their lives.”

“I’m really looking forward to leading my team out on the road to Paris. I only hope we make it to the Eiffel Tower,” concluded Carling. Nicknamed Billy Bumface during his playing days as a result of his cleft chin, it’s likely to be another part of his body that will be saddle-sore come the arrival in Paris.

Meanwhile, Brooke, who survived a blood clot on the brain three years ago after he was involved in a taxi accident in Spain, said: “I’m always looking for new challenges and when Will talked to me about The L2P, I immediately joined the Right To Play team. As a professional sportsman, I know the power of sport and how it can build self-esteem and self-confidence. Respect through sport is at the heart of what Right To Play is trying to do.”

Brooke and Carling will be joined on the ride by the latter’s 22-year-old stepson, as well as Mike Powell, his business partner in the rugby website RuckU.com, Ian Lobley, a partner at 3i Venture Portfolio, and the pair’s fundraising pages can be found here for the former England and Harlequins player and here for the Kiwi star.

Organisers HotChillee have said that they expect to announce further names of stars of sport and showbiz taking part in the ride soon. Already confirmed are Olympic Individual Pursuit Champion Rebecca Romero, who has now switched to the road, and former Paris-Roubaix and Tour de France stage winner, Magnus Backstedt, who now manages his own team as well as being, as regular road.cc readers will know, the purveyor of some rather fine coffee.