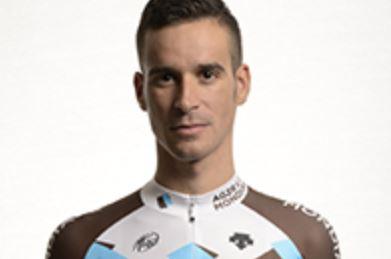 News of French rider's positive comes as Lampre-Merida exit MPCC as they re-engage Diego Ulissi after ban...
by Simon_MacMichael

In a week in which professional cycling is again in the headlines over doping, it has been revealed that AG2R-La Mondiale rider Lloyd Mondory has tested positive for EPO. The news coincides with Lampre-Merida leaving the Movement for Credible Cycling (MPCC) after deciding to re-engage Diego Ulissi following his ban, in contravention of the voluntary organisation’s rules.

In a statement, the UCI said it had “notified French rider Lloyd Mondory of an adverse analytical finding of EPO in a sample collected in the scope of an out-of-competition control on 17 February 2015.

“In accordance with the UCI anti-doping rules, the rider has been provisionally suspended until the adjudication of the affair,” the governing body added.

Mondory retains the right to ask for his B sample to be tested, but could face a ban of four years – twice the previous maximum for a first-time, deliberate offence following the coming into effect of the 2015 World Anti-Doping Code in January.

The 32-year-old is the third rider from the French team to fail an anti-doping control in the past two and a half years.

The team, a member of the MPCC, voluntarily suspended itself from last year’s Critérium du Dauphiné under a rule requiring members to suspend themselves from racing where two riders have tested positive in the preceding 12 months.

News of Mondory’s positive test comes a day after fellow MPCC member Lampre Merida withdrew from the MPCC following its decision to re-engage Diego Ulissi, who was banned for none months after testing positive last year for excessive quantities of the anti-asthma drug, salbutamol.

Under MPCC rules, members cannot sign a rider who has served a doping suspension of six months or more until at least two years after the suspension has ended.

In a statement released yesterday – the same day that the Cycling Independent Reform Commission published its report which said that doping remains widespread in the peloton – Lampre Merida said:

With this Communication, Team Lampre-Merida officially confirms the decision to exit the MPCC, due to the impossibility of confirming there membership.

This decision has been made considering the facts coming from recent events, namely the case of Diego Ulissi, this situation in particular has put Team Lampre-Merida in a position where we are obliged to take this decision as these principles set out by the MPCC are not possible to agree upon, namely: 1) The labor law, 2) Rules and regulations of the UCI.

Team Lampre-Merida will respect the obligation to keep Diego Ulissi as our employer, and with this ensuring the obligation of return to competition for the athlete – respecting the rules and regulations of the UCI – through entry to the races from 28 March 2015.

In reference to the above, Team Lampre-Merida is obliged to postpone its membership with the MPCC, with a possible future consideration for the request of readmission at a time when the rules of the Movement, which in the past have always been respected by the team even though at times have been unfavorable, as long as the regulations are acceptable by the laws of the various bodies of reference.