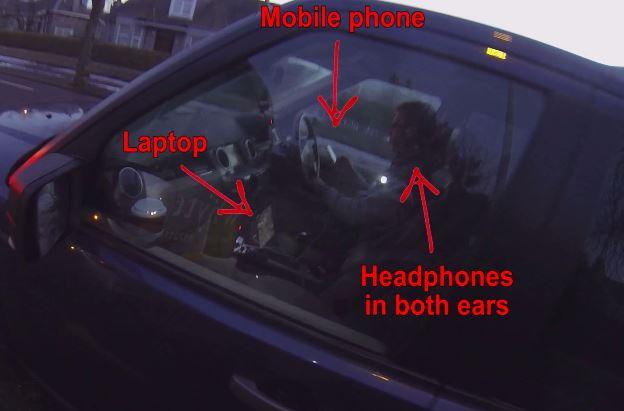 Police in Aberdeen are investigating a motorist who was caught on camera using a laptop computer and handheld mobile as well as wearing headphones while driving a Land Rover Discovery on a busy road in the city.

The footage was filmed last week by YouTube user Aberdeen Cycle Cam, who wrote: “This bloke is driving a 3 tonne Land Rover in town, looking at a mobile phone, laptop and wearing headphones on both ears.

“Not only he's not paying any attention to the road, I suspect he's not even on this planet.”

Aberdeen Cycle Cam added in the description to the video, “Criminal. Should I report this one to the police?”

According to the Press & Journal, Police Scotland say they are “following a positive line of inquiry” in connection with the incident.

Local councillor Ross Thomson told the newspaper that people living locally were concerned about the dangerous driving of some motorists in the area.

“Dangerous driving like this has been a concern of the local community for some time and is regularly mentioned at community council meetings,” he said.

“It is especially a concern on the Queen’s Road because of the close proximity of all the schools in the area.

“The fact he was wearing headphones and had on a laptop is extremely dangerous.

“If you’re wearing headphones you are completely cutting off one of your senses, meaning you can’t hear emergency vehicles or other drivers’ horns.

“I know that driving through town can be frustrating but there is no e-mail that is more important than the life of a pedestrian.”

Some elements of the media describe cyclists who use helmet or handlebar cameras to record instances of bad driving and upload footage to the internet as "vigilantes," often with negative connotations.

But Institute of Advanced Motorists (IAM) research and policy director Neil Greig said more resources should be put into roads policing rather than relying on people using video cameras to help bring drivers breaking the law to justice.

“It’s a clear example of breaking the law on mobile phone use and the driver should be ashamed to be taking such risks for the sake of keeping in touch,” he said. “No call is more important than someone’s life.

“The IAM have no problem with camera users sharing their footage with Police Scotland so that they can consider if formal action is required.

“Ideally, we would like to see more police out there enforcing the law rather than relying on amateurs.

“No one taking such footage should be pursuing a car just to get a good shot. Concentrating on catching someone out is also a distraction from the real task of driving or riding safely,” he added.