The newly merged Cannondale-Garmin Pro Cycling team was unveiled in New York this week, revealing the new look kit and bikes for the first time. The team will be racing Cannondale's SuperSix Evo and Synapse bikes for road stages, and the Slice for time trials, all with Shimano groupsets and Mavic wheels. 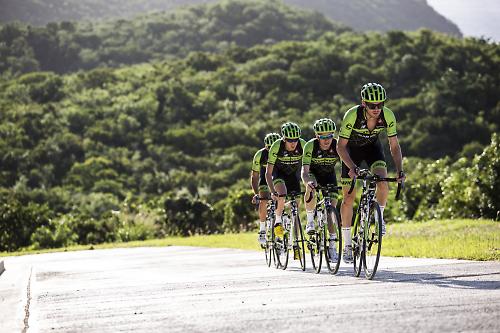 The team will be racing stock, off-the-shelf frames, and that even means the same paint job that you can buy from any Cannondale dealer. It’s common for bike manufacturers to produce unique paint jobs for their team bikes, often to satisfy the various sponsors. Team replica bikes are rarely available, and there's often demand from team fans to get the same bike as the pros race. 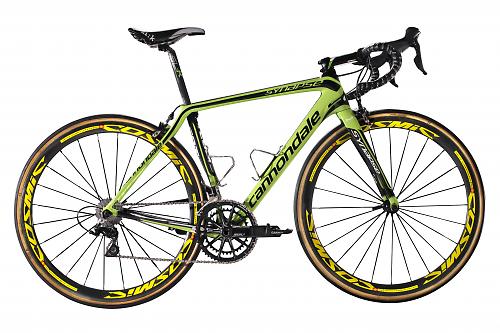 The Cannondale frames will be equipped this year with Shimano Dura-Ace Di2 groupsets and Mavic wheels. Last year the Cannondale team were supplied by SRAM and Vision, but Garmin-Cervelo’s wheel and groupset sponsors have joined forces with Cannondale this season. 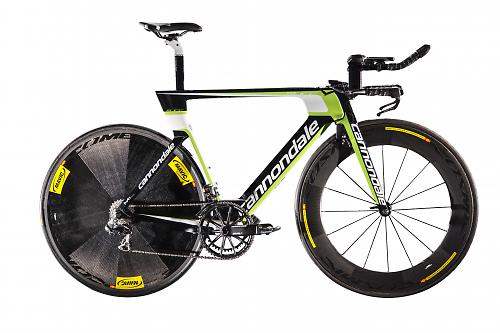 The only deviation from the Shimano theme will be the use of Cannondale’s own SiSL2 crankset. It’s one of the lightest after market cranksets available - we weighed it at 439g (SRAM RED is 557g) when we took an in-depth look at the crankset when it launched. Of course the team will be using Garmin Vector pedals, but it remains to be seen how many of the team will swap to them from their previous pedal systems - pedals are one area where a rider can be quite fussy and have a particular preference, so we'll see.

Mavic have lined up as wheel supplier. Pictured on the bike above, and likely the go-to wheel for most races and stages, will be the Cosmic Carbone Ultimate. This is a 1,185g wheelset with a full carbon fibre construction and TgMAX braking surface. Mavic’s own tyres, so the Yksion Pro Griplink (front) and Powerlink (rear) tubular tyres, will be used.

The Synapse, as it’s the bike for the cobbled Classics, will most likely run FMB Paris-Roubaix 27mm tubular tyres on Mavic’s Cosmic Carbone C40 wheels. That's what's pictured anyway so it's good enough for us. The wheelset weighs 1,435g - we tested the clincher version of this wheelset last year. 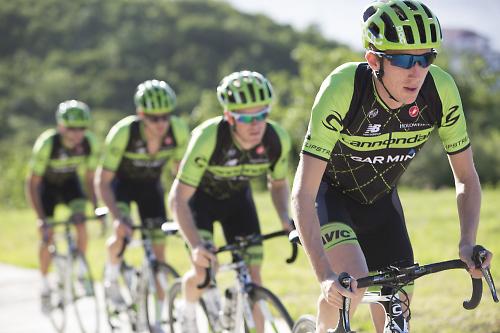 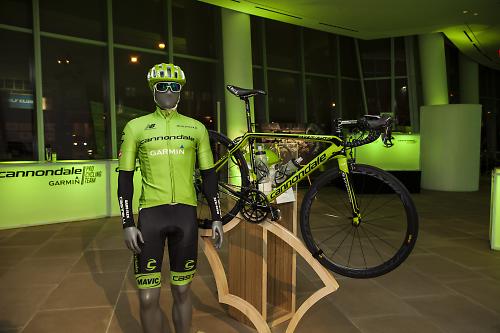 Fizik, a previous sponsor of the Cannondale team, supply the saddles. The team will have the choice of the Arione, Aliante and Antares, depending on their preference, for which they can use the Italian company's Spine Concept to determine the most suitable saddle, based on flexibility.

Bottle cages will be a previous Garmin sponsor, Arundel, a US manufacturer that specialises in bottle cages. The Mandible is their lightest carbon fibre cage. Lastly, the team will of course be using Garmin Edge computers, most likely the 1000 for training and the smaller 510 for racing, well we assume so anyway.

Other kit changes for the new team include POC helmets, which the Garmin team were using last year, but they'll be painted green this year.

Which will match the green Gabba jersey, as Italian company Castelli will supply the team with kit.