The Zephyr is NeilPryde’s take on an endurance bike with a geometry that’s slightly more relaxed than that of a standard road bike, a frame that’s designed to be more forgiving, and space for 28mm tyres.

Hong Kong-based NeilPryde started out in the marine world before expanding into cycling in 2011. Back then, we reviewed their Diablo and Alize (now called Nazaré) road bikes and were impressed by both. 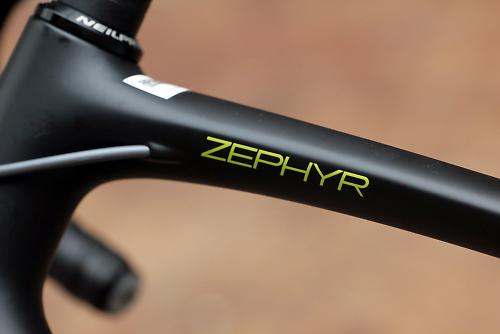 NeilPryde say that, like the other bikes in the range, the Zephyr – made using their C6.7 carbon, a blend of Toray T700and 46T – is designed to be raced but it’s also intended for sportive riders. That’s the line that most manufacturers of endurance-type road bikes take: many of Specialized’s pro riders use the Roubaix across the cobbles in the Spring Classics, Trek’s riders use the Domane, Team Lampre racers are often on the Merida Ride and so on, but the vast majority of these bikes are sold to people who aren’t going to race them, they’re going to use them for sportives and other big rides. 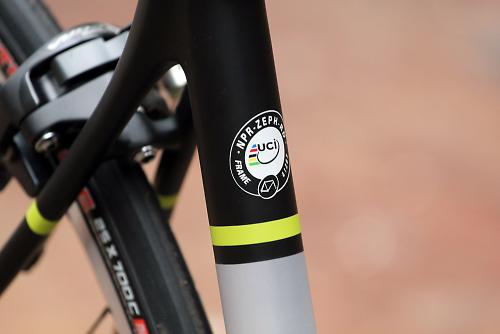 “The Zephyr geometry has been modified from that found on the Alize [the Nazaré, as it is now] and Bura sl to include a slightly higher head tube to put less strain on your back and neck, a longer wheelbase and a shorter top tube,” say NeilPryde “It's the right way to get most riders, including many professionals, in the right position. With no need for high-rise stems or spacer stacks, the look is nothing but pro.” 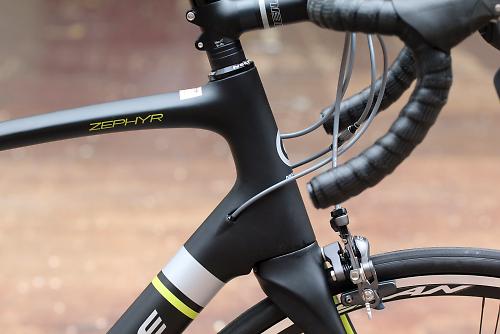 We have a large sized Zephyr in for test here at road.cc. It has a stack height (the vertical distance between the centre of the bottom bracket and the top of the top tube) of 578mm and a reach (the horizontal distance between those same two points) of 378mm. For comparison, the large sized Bura sl has a stack of 574mm and a reach of 385mm – so the Zephyr is a little shorter and taller. Bear in mind, though, that NeilPryde haven’t gone over the top in making these adjustments to the geometry – a 17.5cm head tube on a frame of this size isn’t exactly lofty. 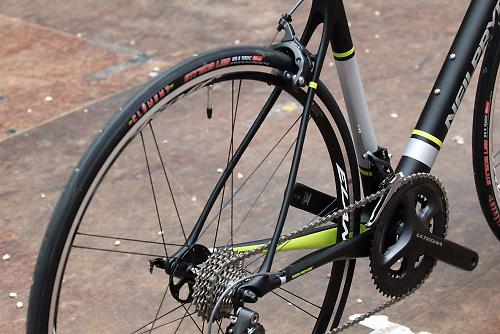 As well as the geometry, NeilPryde say that they’ve worked on vertical compliance. Of course they do! Everyone who makes an endurance bike says that they’ve added a load of give into the frame to improve comfort. 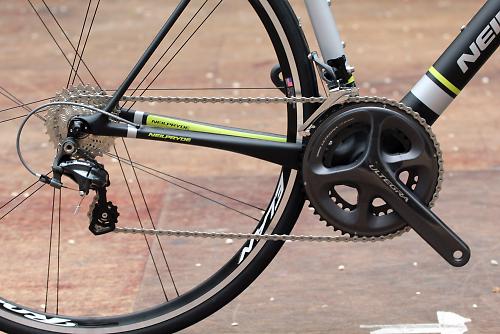 The chainstays are flattened (they’re wider than they are tall through the central section) and the curved seatstays are ultra-skinny (1cm in diameter), and NeilPryde say that they’ve varied the thickness of the carbon-fibre walls to encourage tube up/down flexion in the stays. 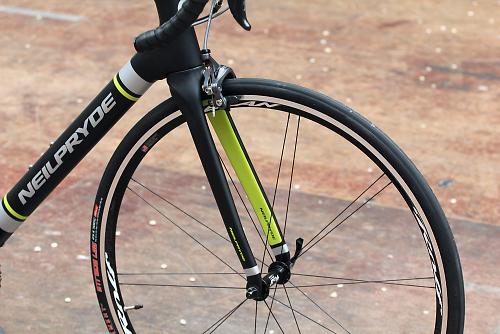 They say that they’ve varied the thickness of the carbon in the fork blades too, and that the fork, sweptback towards the dropouts, absorbs vibrations for increased comfort. NeilPryde have also specced a skinny 27.2mm diameter seatpost in an attempt to filter out more road buzz. After years of large-diameter seatposts, many manufacturers are now switching back to 27.2mm for this reason. The saddle is a NeilPryde branded one from Velo and a quick thumb test says that it has plenty of flex in the shell although only a few hours out on the road will tell whether that translates into a comfortable ride. 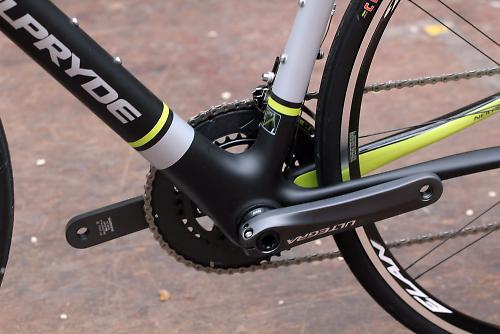 Like ever more performance-orientated bikes these days, the Zephyr comes with a tapered head tube (1 1/8in to 1 1/4in) and an oversized PressFit 30 bottom bracket for additional stiffness in both of those areas. 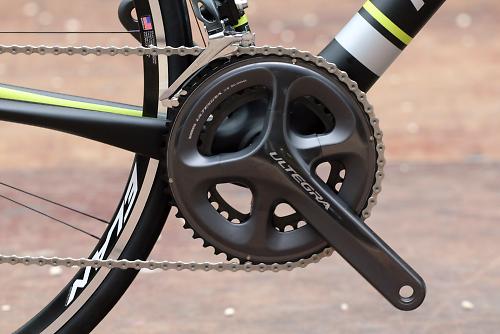 Our test bike has come with a Shimano Ultegra mechanical groupset (it is Di2 compatible), including a compact chainset (50/34-tooth), but it differs from the standard build in that the wheels are Rolf Prima Elans (£749) fitted with Clément Strada LGG 25mm tyres (the 120TPI version, if you want the specifics; £27.99 each). The standard version has Shimano RS31 wheels. The handlebar, stem and seatpost are all NeilPryde’s own aluminium options. 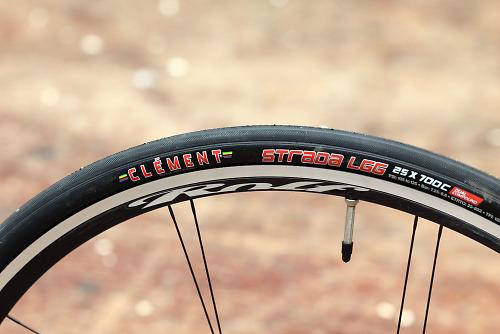 NeilPryde claim a frame weight of 1,050g in this large size and our complete bike weighed in at 7.5kg (16.5lb) on the road.cc Scales of Truth, which is pretty light for an endurance bike. 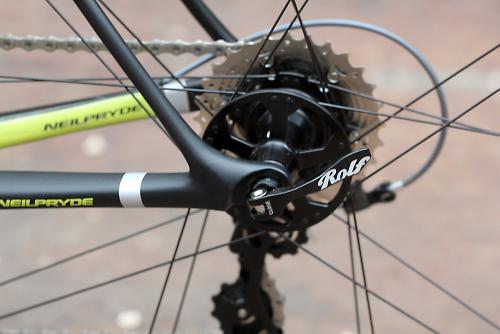 We’ll be riding the Zephyr over the next few weeks. If you want more info before we’re back with our test report, head over to www.neilprydebikes.com or visit the website of UK distributor 2Pure.