Something a bit different then. Koga’s E-Nova RT sits near the top of the Dutch brand’s extensive electrically-assisted range and features the latest generation of Bosch bottom bracket motors coupled with an 8-speed Nexus hub gear, bolted to a 6061 Aluminium frame and decked uout in full city kit.

Pedelec bikes like the E-Nova are big news on the continent. In the Netherlands e-bike sales make up between 15% and 20% of all bikes sold, with the average spend per bike somewhere around £1,500. It’s a fairly mature market now, and what started out as a tool for the less physically capable (over 55s were the early adopters) has spread; with the Netherlands’ commitment to build a network of direct, high-speed commuting routes for bikes into key cities an electric bike makes more and more sense even for longer commutes. Back here of course, it’s a bit of a different story (ain’t it ever the case, comparing the UK with the Netherlands…). The average spend per bike is a lot lower, and you don’t get far into a conversation about electric bikes before the notion of cheating rears its head. Ask pretty much anyone from the continent whether they think it’s cheating and you’ll inevitably get a similar reply: cheating at what? Cheating at going to work? Cheating at going to the shops?

It’s our national obsession with all forms of cycling as sport at the root of this. We don’t have the same culture of bikes simply as transport; ask Copenhageners why they cycle and the first thing they’ll point to is that it’s faster (55%) and more convenient (33%). They like the fact that it’s healthy too (32%) but it’s not a fitness thing. Ask them specifically what they like about cycling and getting fit doesn’t feature in the top five: It makes me feel good; It de-stresses me; I discover the city; There’s lots of cycle tracks; I experience the seasons.

All of which is basically to say: if you think it’s cheating, you’re missing the point. Adjust your filter. More bikes is better. Don’t assume everyone has the same priorities for their cycling as you. Back to this specific bike then. Bosch’s current generation of bottom bracket motors are generally regarded as among the best out there; it’s one that I’ve tried, briefly, at Eurobike but wanted to give a proper test. The Active Cruise motor will assist you up to 25km/h and delivers 48Nm of torque. Because it’s bottom bracket mounted it’s not capable of regenerative braking like a hub motor is, which allows you to recharge the battery a bit, and extend the range. but sensing pedal torque and applying power is all done in the same place, so it’s a lot neater. The Bosch system checks the pedal input 1,000 times a second, apparently. Which should be plenty. It’s controlled by the bar-mounted Intuvia system, which gives you a wealth of information on a centrally mounted console. You get all the normal bike computer functions (speed, trip distance, time, clock) plus a range estimate based on the charge in the battery and the ride history. When we first turned it on it gleefully suggested it’d be good for 120km in Eco mode. Now we’ve shown it Bath’s topography it’s a bit more circumspect. A lot more circumspect, actually. As well as the console there’s a remote switch which you can use to change the assist level (Off > Eco > Tour > Sport > Turbo) and also toggle between the different data screens. it falls easily to hand and is second nature to use. Boot it up to turbo for a kick off from the lights (or the steep bits), slap it in Tour for general rolling around. Simple. The battery’s in the rear rack. You can charge it in situ, or remove it to bring it inside to juice up if you leave the bike in a shed or garage. It uses the same key as the nurse’s lock which you can secure the bike with if you’re popping into the shops. At 25kg, you’d need to be pretty determined to make off with it if it wouldn’t roll. The battery is rated at 400Wh and is good for, well, let’s see. More where it’s flatter. The bike itself is a fairly standard aluminium diamond frame, saved for the curved plate at the bottom bracket where the motor bolts on. The position is fairly upright and that’s exacerbated by the swept bars, which reduce the reach, and the adjustable stem which looks designed to be set quite high. You could slam it, kind of, if you wanted. I suppose. 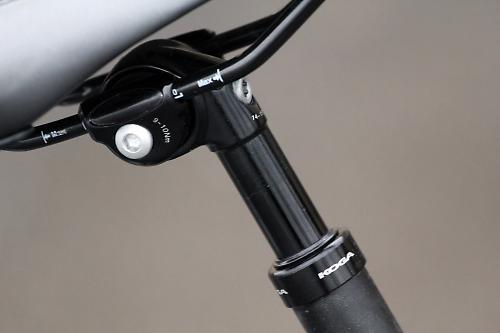 It’s built for comfort rather than speed, so you get a Koga Feathershock suspension fork (think Cannondale Headshok on a smaller scale), wide saddle, suspension seatpost, luxurious leather grips and hardy Schwalbe Energizer 37mm tyres. All that, with the high position, should make for lordly progress. The chain and the Nexus hub gear are completely enclosed on the drive side by a full chainguard, so there’s no danger of getting oil on your keks. The Nexus isn’t Shimano’s top-end hub gear but it’s decent enough; if you really want to push the boat out then the E-Nova also comes built with NuVinci’s Harmony system, which offers continuously variable transmission and automatic gear selection. Brakes are Magura’s excellent HS-11 hydraulic rim brakes which have more or less died out over this side of the Channel but are still well used for city and touring bikes on the continent. They’re powerful, and the linear action of the pads makes for even wear too. If that’s not enough to stop you then the Nexus hub also features a coaster brake as an extra braking option, great for scrubbing off speed on descents. As a city bike the E-Nova comes with mudguards, a dynamo light set (The Bosch system can run the lights from the main battery but that’s not the case here), a kickstand, a pump, a sprung rack and decent quality flat pedals. Like, you know, a Dutch bike. All that will set you back £2,529. A fair whack for a bike, but if you’re buying it so you don’t have to run a second car then that’s only about 18 months’ worth of fuel, insurance, road tax (JOKE) and depreciation. I’m going to use it as my day to day bike on my work commute, which is mostly down a very big hill (3km at 5%) in the morning and back up it come the end of the day. Plus trips around town, and to the swimming pool at the University, and so on and so forth. Basically, I’ll just be replacing my normal everyday riding with trips under power. I’ll let you know how I get on.