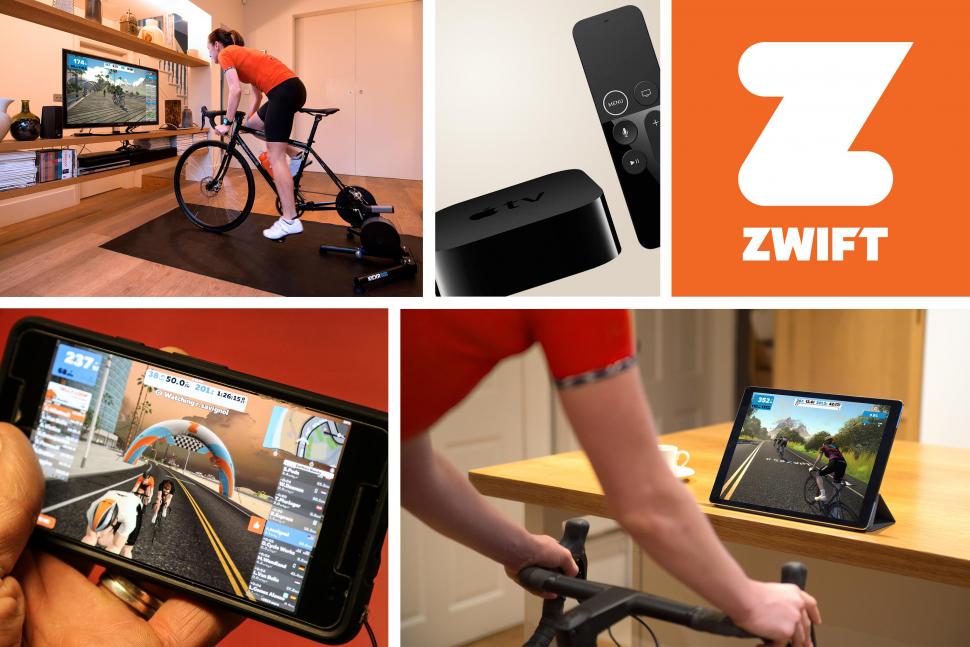 Whether you have a PC, a laptop, a tablet, a smartphone or an Apple TV, setting up Zwift is simple. Why not try it now?
by dave atkinson

If you’re thinking of getting started with Zwift, you might be wondering: how much is this all going to cost? Well, the good news is that to get started you can probably use a device you already own to run the app. If you have a smartphone, or a desktop or laptop computer, or a tablet, or an Apple TV box, you can use that as your window into Watopia. Or New York, or Yorkshire, or Richmond, or Innsbruck. How? Here’s how!

> Read our beginner's guide to getting started on Zwift

Head over to the Zwift download page to get the latest version of the software for PC. It’ll run on most modern desktops and laptops; check the bottom of this article for Zwift’s published minimum requirements for all classes of device. 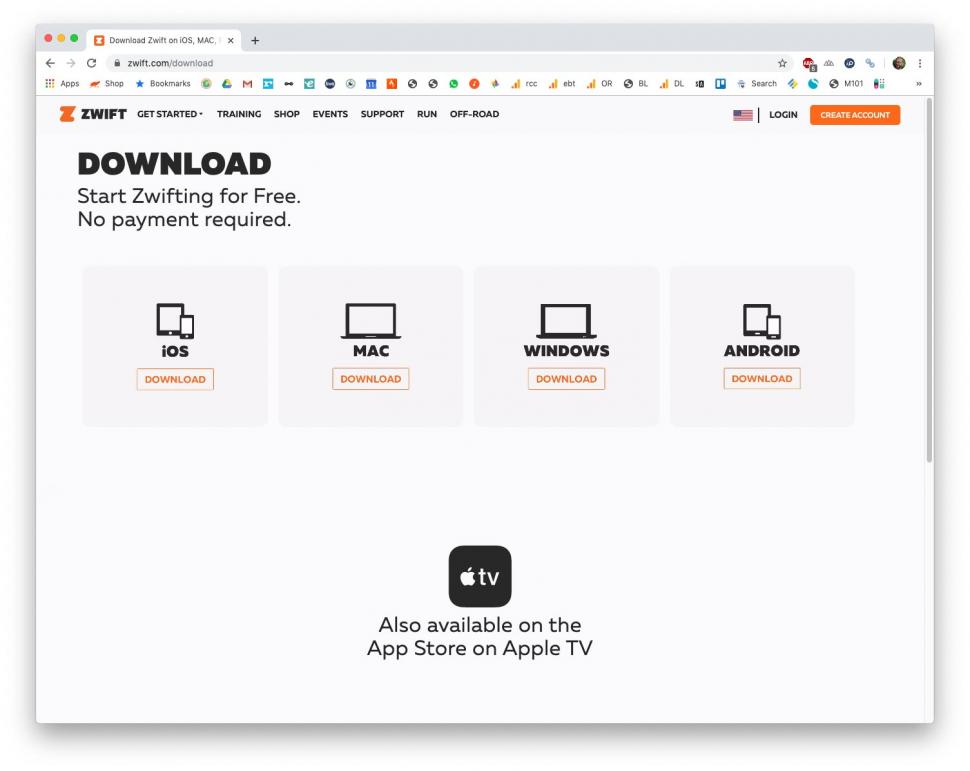 The initial download is quite light, but once you’ve run the installer and fired up the app it’ll have to download all the world data, and that can take a while: there’s a lot of riding out there, after all. So don’t start to download the app five minutes before you want to start, after you’ve already got your lycra on. Give yourself a couple of hours one evening to get everything set up just right so you can dive on whenever you want to. 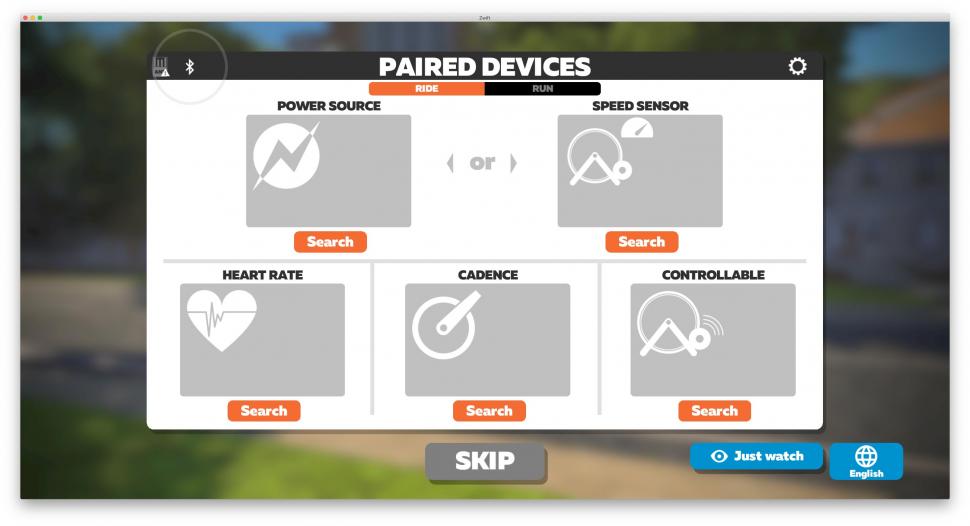 When you initially log on on any platform, you’ll be asked to pair your devices. On the PC this can be done via either Bluetooth or ANT+, so anything you’ve already got should be supported. Many modern trainers and sensors can transmit on both, and nearly all PCs have native Bluetooth support. If you want to connect via ANT+ you can use a USB dongle: Zwift offers its own and there are plenty of cheap ones on Amazon that’ll work fine too. You can have a mix of Bluetooth and ANT+ devices if you want.

Once you’ve got the software running, it’s a good idea to dive into the settings to make sure you’ve optimised it to your setup. If your graphics card isn’t the highest spec then you may want to drop the resolution the game runs at in order to get a higher frame rate and a smoother experience. The app will run at anything from 576p resolution right up to 4K; you’ll need a big telly and a fast computer to get the most out of the 4K mode.

Setting up on a Mac is a very similar process to getting going on the PC. The download page  (https://zwift.com/download) will give you the latest installer, and from there it’s a case of firing up the app, downloading the world data (make sure you have 4GB of disk space free before you start) and connecting your trainer and/or sensors. If you’re using your smartphone to run Zwift’s Companion app – and we recommend you do, it makes everything a lot easier – then you’ll need to ensure that both your phone and your Mac are connected to the same network. 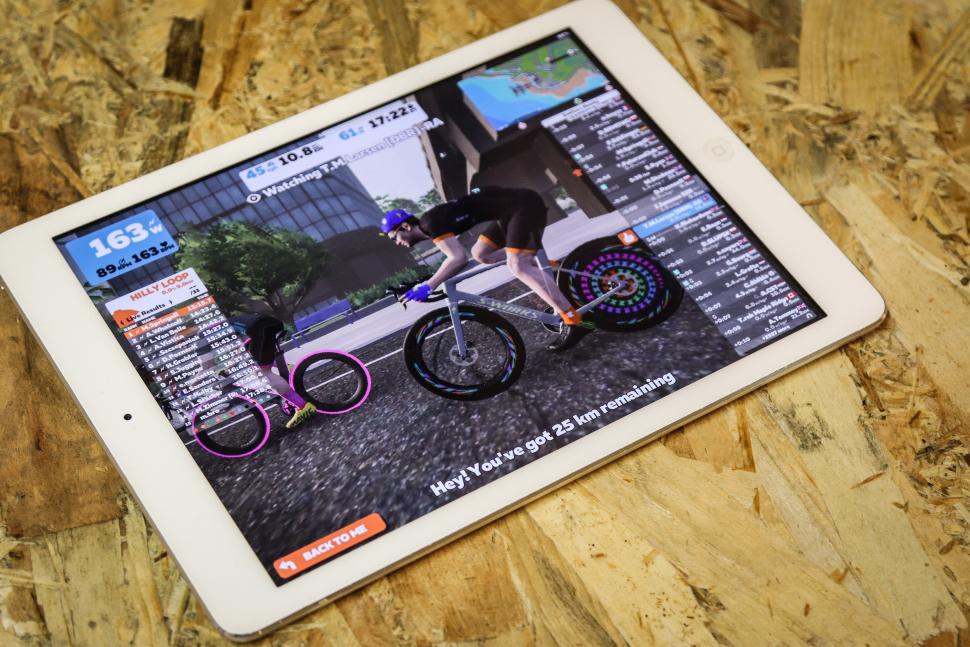 Zwift can be installed on any iOs device that’s running iOs 9.0 or higher. Pop over to the App Store to get the latest version. The app is a meaty 1.5GB, so make sure you’ve got enough space on your device.

You’ll need to be using Bluetooth trainers and sensors with your phone as the iOs app doesn’t support ANT+, even if you have an adapter for your iOs device. That’s not generally a problem – modern trainers and many new heart rate, speed, cadence and power sensors are dual band – but it’s worth considering if you have older ANT+ gear. There is a way to get around this: the Viiiiva heart rate strap from 4iiii or the CABLE dongle will pair to your ANT+ devices and spit out the data on Bluetooth so you can use it in the app. Handy if you’ve got an older ANT+ power meter, for example. 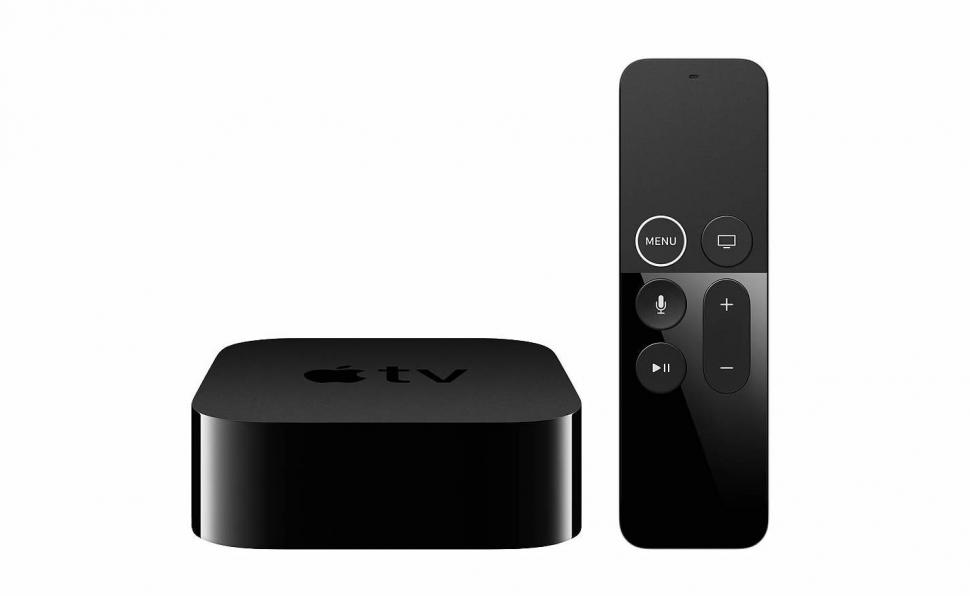 If you want to experience Zwift on the big screen then getting an Apple TV box – or using the one you already have – will be the cheapest way to do it for most people. Zwift will run in HD on Apple TV boxes from the 4th generation onwards; Zwift recommends the 4K box because it has a faster processor for a smoother experience. The App Store is the place to go for the download.

Like iPhones and iPads, the Apple TV app doesn’t support ANT+, so you’ll need to convert the signal to Bluetooth if you want to use anything that’s ANT+ only. 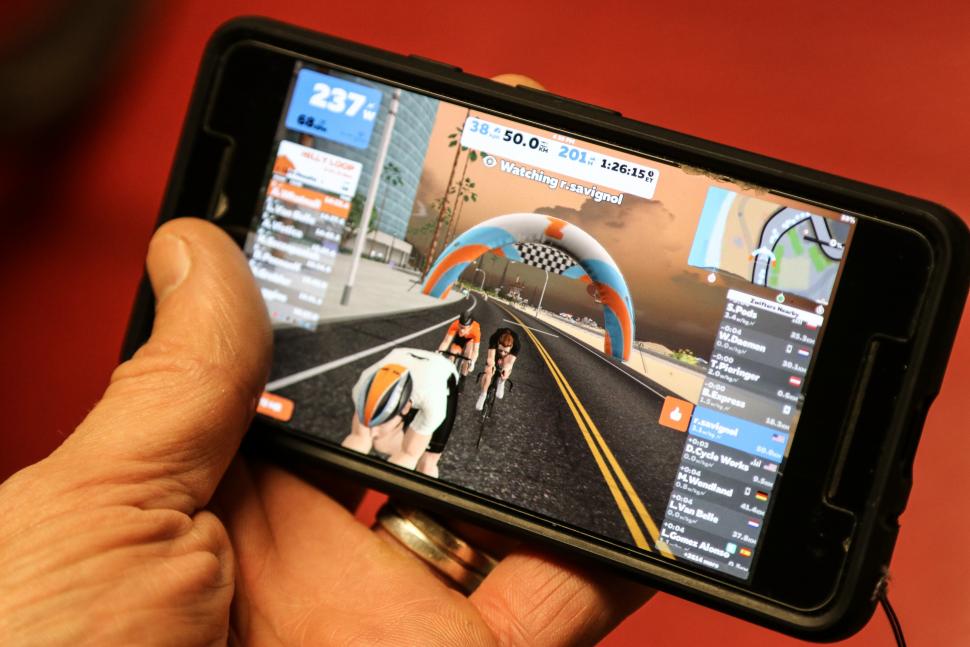 Any Android device running version 6.0 of the operating system or higher is technically capable of running Zwift (still in beta on Android), but with Google’s operating system being less of a closed system than iOs it’s a lot more difficult for developers to cover all possible devices. There’s a curated list of supported devices on the Zwift forum but the general rule of thumb is: if you can see and download the app on the Play Store then you should be good to run it. As ever, how well it’ll run will depend on how powerful your smartphone or tablet is.

Although some Android phones natively support ANT+, the Zwift app currently does not, so ANT+ devices will need to run through a bridge (see iOs devices) to convert the signal to Bluetooth for use in the app.

For desktop computers, most modern machines will be okay. You’ll need at least 4GB of RAM, and 4GB of free hard drive space. Because Zwift is very graphics-intensive, a good graphics card will have a big impact on how well the app runs.

For smartphones, tablets and streaming devices, the same rules apply: the faster your device the better Zwift is likely to run, and a device’s graphics capability will be an important part of the equation.