Cycling while pregnant: Bump and Ride part 3: what to expect during the third trimester of pregnancy

Now you’re on the third and final trimester, you may be feeling some discomfort from pelvic girdle pain. Here’s what you need to know to carry on riding
by Anna Marie Hughes

This article and video includes paid promotion on behalf of Cannondale and Ale Cycling.

So you’re well over halfway there, having made it through the first and second trimesters of your pregnancy... and your bump is, well, definitely a bump now! If kept to a moderate intensity, exercise can help keep you fit and prepared for childbirth. Here’s what you need to know about cycling in your final and third trimester, from week 27 until you give birth, which is from around week 37 to week 42.

In a series of videos on our YouTube channel, road.cc presenter Becca Charlton has been sharing her current pregnancy journey, and turning to the experts including former British Cycling physiotherapist Phil Burt, GP Ralph Mitchell plus female pro riders Dame Sarah Storey and Elinor Barker, who have both cycled through pregnancy (or are currently doing so in the case of the latter.)

“I've come through months and months of still being able to get on the bike, still being comfortable and day to day I've been able to work and carry on pretty normally.

“As the bump has grown, I’ve found ways to bring the stem up and still keep going, but I keep thinking that at some point this could change and end because, of course, as you progress towards the due date, you just don’t know how you’re going to fare.

“I think I’d anecdotally heard from a lot of other people who are maybe ahead of me in their pregnancy or had children already, and they said ‘you know you are lucky because I got signed off from exercise quite early on’ - I am still riding and I am still feeling relatively lucky and good but I have started to have some discomfort.” In the third and final trimester it’s very important to continue to keep things comfortable and listen to your body. Experiences can vary; but pelvic girdle pain is something that can affect a lot of women, and is an issue Becca has now come across in her pregnancy.

You can now watch the third instalment above to continue to find out what you need to know if you’re an amateur rider like Becca. If you prefer good old words though, read on to find out about how you can expect to be feeling and what you can do to help mitigate your symptoms.

If you missed parts one and two, we’ve looked at the benefits of continuing to cycle throughout your pregnancy, delved into the NHS advice on what intensity you should be riding at, explored how to fuel and stay hydrated, and considered positional and clothing changes that are needed to keep things comfortable in our guides to the first and second trimesters.

You may experience pelvic girdle pain

Dr Ruth-Anna MacQueen is an obstetrician and gynecologist for the NHS, and in her second pregnancy she also suffered from quite bad pelvic girdle pain.

“Pelvic girdle pain is really about the bones in your pelvis kind of grinding up against each other,” MacQueen explains.

“Normally your pelvis behaves as if it’s just one big bone, but actually there’s lots of different bones.

“Those ligaments start to relax, which is obviously to allow the baby’s head to come down and your pelvis to open up a little bit.

“But the impact is that all those tiny bones that are next to each other sort of grind against each other when there’s movement, and particularly when there’s asymmetry, or any kind of imbalance from one side to the other.”

Becca shares: “I was just sat at the dinner table and then I went to stand up and for the first time in the pregnancy really I just felt what was really my first alarming sort of pain.

“It was this real pain through my pelvis, and I couldn’t even put my finger on it because it’s not something I’ve experienced before.” 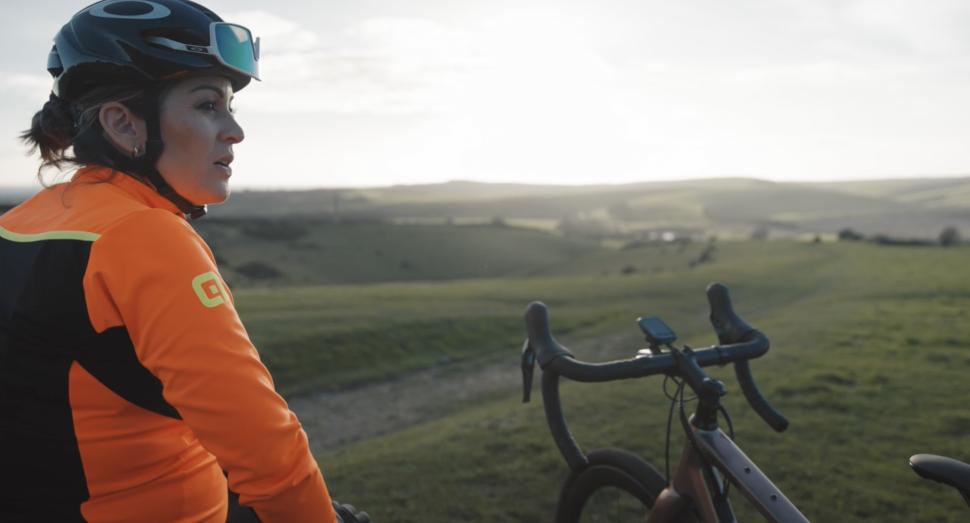 Pelvic girdle pain becomes quite common during the later stage of the pregnancy.

“Lots of women find they have it if they’re going up and down stairs,” MacQueen says, “or if you cross your legs, you may not feel it at the time but you’ll definitely feel it later. “

MacQueen recommends putting pillows between your knees to keep them aligned.

“With pelvic girdle pain you often feel it a bit later and it’s often when you change position as well,” she explains. “If you’re sitting on the sofa you might not be in pain at all, and then you go to stand up and it’s really excruciating, or if you’ve been standing for a long time and then go to sit down.”

Being aware of what your particular triggers are is important, says MacQueen, because they’re different for everyone.

“I am at that point where it’s a pain that’s just started, it’s restricting me far more with walking and shuffling around at home than it is actually on the bike,” says Becca. MacQueen also found that riding a bike was more comfortable than having the weight on her hips during her pregnancy.

“But I really want to know, am I doing anything wrong?,” Becca admits.

“Have I caused this? Could cycling exacerbate it? Is this something that I need to be really aware of?

“As much as I really want to continue being active, I am in the later stages of pregnancy and I don’t want to do any long term damage.

“I also need to think about the part where I get to labour and when something like this happens, then I have sort of felt like something isn’t right, it’s been really important to me to actually seek medical advice.”

Another expert Becca has been speaking to is former British Cycling head physiotherapist Phil Burt. 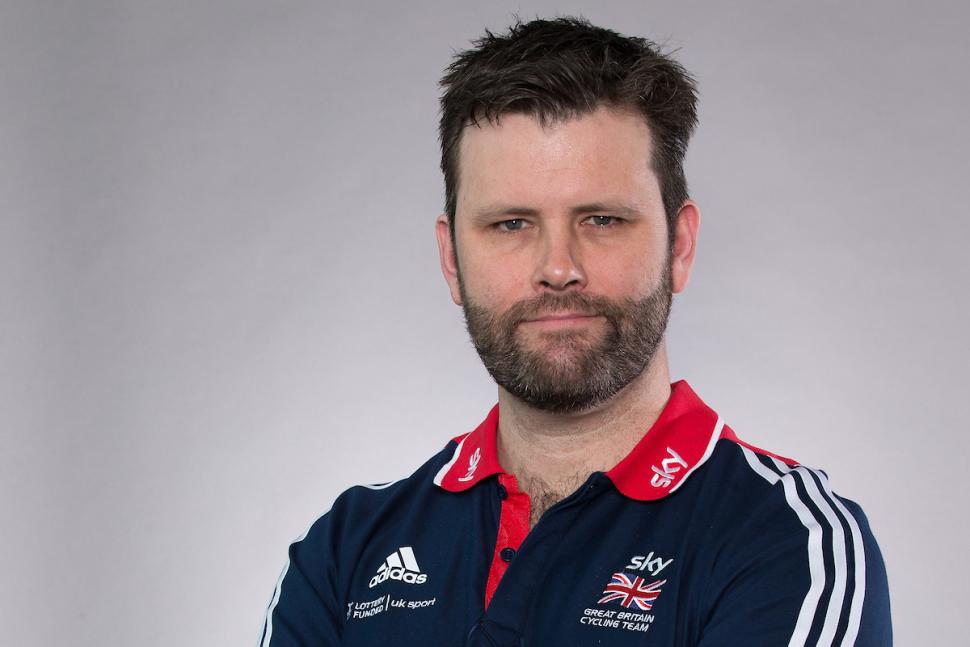 “You’re going ‘well look, I’m in a different position now, I don’t want anything to happen to me that I can’t control’.“

Indoor cycling gives you most of the benefits of exercising in the fresh air, but with a lower chance of something going wrong. You’re not miles from home if things start becoming uncomfortable, and it’s (almost) impossible to fall off your bike.

“Caution and doing nothing is the easiest thing in the world, but that has risks for your health, the health of the pregnancy and how you come out of it afterwards,” Burt notes. “I personally think you should do as much as you comfortably can and that’s the word - if it’s comfortable then it’s probably all right.”

Pelvic girdle pain is different for each woman, and Burt highlights that this can be down to the position of the baby’s head.

While your pelvis bones are coming apart during your pregnancy, issues can also occur after giving birth if they don't reset the same way: “Lots of postpartum women have quite debilitating long term pain after childbirth because of the way it resets,” says Burt.

As always, listening to your body is incredibly important if experiencing such pain here.

“Just go with what feels good and what feels like it’s working because you’re literally changing everyday,” Burt says.

Gentle heat is something that’s really good for back pain, and Burt recommends using a hot water bottle or wheat bag for this; but also adds that you need to make sure it’s not too hot. It’s just about easing those muscle aches.

“If you have these symptoms now, after you give birth you should be taking your time to come back,” Burt notes.

“If you rush into things you may get into a scenario where you go, ‘oh hold on, I’ve got a long-term problem now’.

“That doesn’t mean be overly cautious. When you go, ‘oh hold on a minute, that feels like it as before’ - that’s the time to push.”

Ensure you are well rested

Since cycling through pregnancy and returning to top competition level after the birth of her two children, Dame Sarah Storey says she has kept an eye on pregnancy related news: “I saw that there were fewer premature births during lockdown because people rested enough,” she notes, “that’s not rest from activity, that’s rest from work.” From her own experiences, Storey recommends getting enough sleep when your body is telling you to. “As your body changes you might feel like you need to nap more, or you might not be able to sleep as long at night as you normally would because of bladder related issues.

“Find time to make sure you are getting that sleep in, not because the baby is going to stop you sleeping but because you’re looking after your body in the here and now.

“People say ‘oh, you’ve got to sleep now because the baby won’t let you sleep’, well actually, you just want to grow it properly first, and that’s why you need to sleep today.”

One other thing to bear in mind during the third trimester is that it's important not to lie flat on your back as you might on a yoga mat, MacQueen says.

“That’s really just because the weight of the baby pushes down on the vein that’s taking blood back to your heart.

“You will know if you’re putting pressure on your inferior vena cava because you will feel faint before anything happens to your baby.”

If you’ve kept up cycling while pregnant, how did you find the third trimester compared to the first and second? Do you have any other tips?