Bike Blenheim Sportive, words and pics on some great riding and a rather fine tea stop

You may’ve hung up your racing wheels, but there’s still fun to be had on the end-of-season sportive circuit as David Else found out at Blenheim Palace
by David Else

The days are getting shorter, the leaves are turning brown. Autumn is definitely here. You may’ve hung up your racing wheels until 2010, but there’s still fun to be had on the end-of-season sportive circuit as David Else found out at Blenheim Palace.

This year’s Bike Blenheim Palace festival of cycling included family rides, cyclo-cross, stunt-cycling, a time trail, cyclo-polo, Go-ride for children, the legendary Brompton world championship, and - for the first time - a sportive. It may be new in the calendar, but going by the quality of this event, it’s sure to become a regular fixture.

The sportive start was in the heart of manicured Blenheim Park, right next to the great baroque edifice of the Palace itself, and the first mile or so included a loop round the ornamental lake followed by a cruise down the grand drive, to exit via a decorated gateway onto the open roads.

The 100-mile and 60-mile options meant there was a wonderful mix of riders: from full-on fast boys aiming for sub-5 hours, to easy-going leisure cyclists happy to make a day of it. And a great range of bikes too; it was great to see tourers and flat-bar hybrids, as well as tons of fancy carbon kit. Not to mention a few tandems and mountain bikes. And I’m sure I saw an old-school trike out there too. Something for everyone - just like a good cycling event should be. 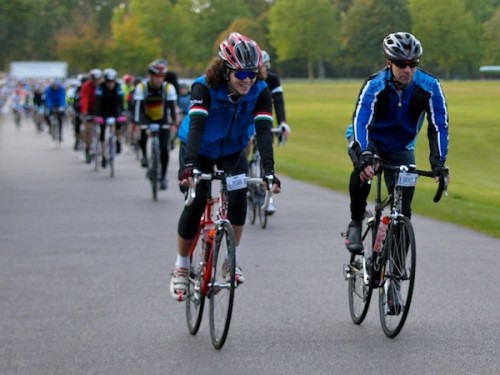 The longer and shorter options shared the route for the first 24 miles, down delightful Cotswold lanes. The wind was against, but not too strong, and at least meant we’d get assisted on the way home. I was riding with a couple of club-mates and we teamed up with some other riders to get a good group of about 20 rolling along nicely.

We went through Charlbury, then skirted Chipping Norton and Stow on the Wold to reach the first feed station at Lower Swell. This was the only stop for those on the 60-mile event, and the spread was impressive - bacon butties, soup, hot drinks, biscuits and Gatorade energy drink – but perhaps a bit early for those on the longer route.

The 100-mile route continued northwest across the hills before dropping down the Cotswold Escarpment to Broadway. Then we swung west and south, via a water fill-up at Alstone, to reach Winchcombe and the first real hill of the day, back up the escarpment to Charlton Abbots. This was a couple of miles of ascent with 1-in-6 in places, meaning some riders ran out of gears (or energy) and had to walk. 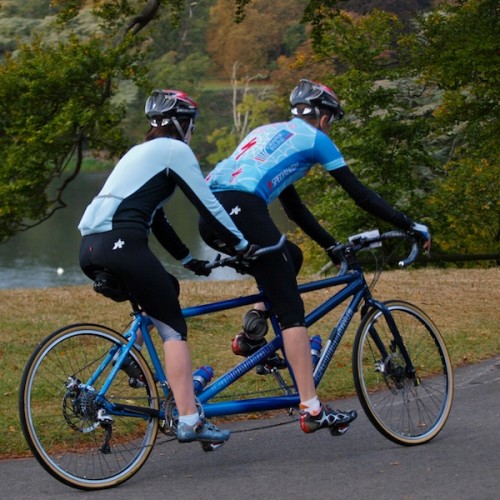 But all was forgiven on the next bit: mostly gradual downhill and wind behind on smooth tar all the way to the Lower Swell feed, from where the longer and shorter routes combined again for the final 35 miles.

By now, we were cutting across the grain of the Cotswolds, and it showed: lots of short ups and downs as we descended into river valleys then climbed steep little hills on the other side. The route went though Bourton-on-the-Water, Shipton-under-Wychwood, Minster Lovell and Delly End (got to love the names), ending with a brilliant last mile down the long straight of Blenheim’s grand drive to reach the finish.

More than 1000 riders started the sportive, with over 400 completing the longer route. Times ranged from around 4.5 hours to 9.5 hours for 100 miles, and from just under 3 hours to about 7 hours for 60 miles. Admittedly the route was not as hilly as the classic sportives in Dartmoor, the Pennines or North Wales, but there’s nothing wrong with that. It was maybe closer in ethos to some of the Continental sportives, where the aim is to give you a challenging and enjoyable ride, not to kill you.

As sportives go, Blenheim ticked all the boxes: a perfect combination of B-roads and minor lanes, with very light car traffic (but not ‘minor’ as in cart-track); good clear signing all the way round, and a platoon of excellent marshals; plenty of parking and good facilities - so only short queues for the loo. And once you’d finished the ride, you could enjoy the rest of the festival, watch the cyclo-cross or stroll round the trade stands, or just sit in the sun and drink tea – the prefect way to end a great day out on the bike.