Exclusive: Printing Titanium bicycle parts… here's how EADS and Charge do it +video

I'm watching a machine print some dropouts. It's an expensive machine; if you want one for your shed you'll need to front about half a million pounds. It's printing them in super-hard 6Al/4V titanium alloy, and the design is such that they couldn't be produced any other way. They're optimised for the process, hollow, finite-element-analysed on the computer to be stronger and lighter than anything you could produce on a CNC machine.

Once they're finished they'll be off with Nick Larsen of Charge Bikes to Taipei, where they'll be welded into a cyclocross frame, the prototype for a run of 50 bikes that will be the first ever to use this technology. This is cutting edge stuff, and the resulting frames will be pricey, but the technology is only going to get cheaper. Is this the future of bike part production? The machine in question is in an unremarkable brick building on the EADS Airbus site at Filton, one of a vast number of unremarkable brick buildings with fantastical things inside. Over the road is the wind tunnel; up the hill a composites lab where they're struggling with the problems of building and curing 35-metre wing structures to a tolerance of 1mm for the next generation of mass transit aircraft. Building 10K has a roller door and a couple of ice-encrusted Argon cylinders in a cage outside. Step inside and you're face to face with a process that may well revolutionise metal components. This is the Centre for Additive Layer Manufacturing.

We're in the company of Specialist ALM Engineer Andy Hawkins, who we've featured on road.cc before. Remember the printed plastic bike? The guys at EADS made that bike to showcase the possibilities of layer manufacturing processes. That was using a nylon powder, but since then they've mostly turned their attention to what can be achieved with metal, and specifically titanium.

Let's think about metal bikes, and how they're made. Historically there's a few processes that are used to create components. Tubes and spokes are drawn, pulled through dies to create their shape and manage their material properties, and some structures such as rims are extruded, pushed through a die rather than pulled. Most other components are forged, formed into shape using dies and huge pressures. More recently CNC (Computer Numerical Control) machines have been increasingly employed, milling components from a billet of material or from pre-forged parts. It's these latter two processes that the new technology, Direct Metal Laser Sintering, or DMLS, may well challenge in the future.

Both forging and CNC have their limitations and drawbacks. For a start, there's a limit to the kind of shapes that can be achieved with either process. CNC has a very high waste rate too; often 70% or more of the material ends up in the scrap bin. Forging has very high tooling costs: change the design of a part and you need new dies and a lot of downtime. DMLS addresses all these issues. It has the potential to produce incredibly complex parts with almost no wastage and no tooling costs other than the cost of the machine. 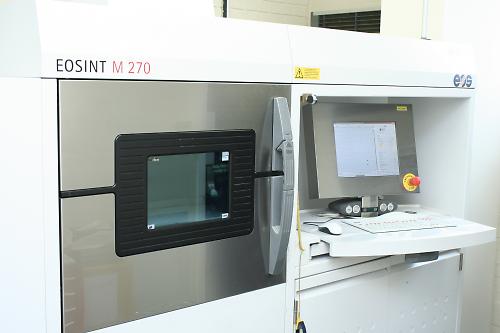 A DMLS machine works from a CAD representation of the finished part, and splits it into layers a few microns thick. The working area of the machine is a bed plate covered with a very fine metal powder - titanium in this case but the process can be made to work with aluminium, steel, gold, platinum, pretty much anything. A laser selectively melts the powder according to the design, then the bed moves down and a new level of powder is drawn over the top. Then the next layer is printed, melting into the layer below, and the process continues. So the machine effectively prints the part one slice at a time. When the build is finished the titanium powder gets recycled back into the machine for the next run. 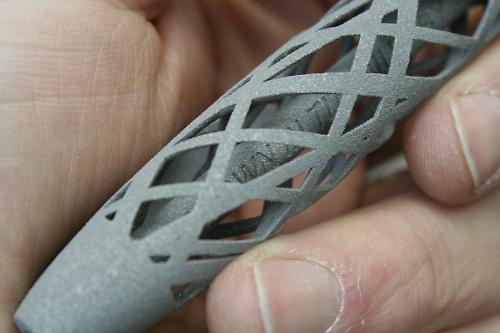 This approach means that parts can be incredibly complex. It's possible to create hollow structures and remove unneccessary material from a part in a way that isn't an option with traditional methods, meaning that parts can be lighter, or stronger for the same weight. The finished part needs no additional treatment except a bit of oven time, and the resulting metal is isotropic (uniform material properties in all planes) with the same material strength as a solid billet. One of Andy's favourite demonstration pieces is a pen body that consists of a hollow tube with embossed writing surrounded by a lattice work outer layer. "It would be impossible to make it any other way," he tells us. The process is especially suitable for titanium parts for a number or reasons. For a start, titanium is expensive, so anything that reduces wastage is a bonus. It's also poor at conducting heat, which means that the laser is able to very effectively and accurately melt the layers. Aluminium, which melts at a much lower temperature, requires twice the laser power because it's such an efficient conductor. Titanium, especially as a 6Al/4V alloy (6% aluminium and 4% vanadium) is extremely hard, and that makes it costly and time-consuming to machine. The additive layer process is so well suited to making small and complex titanium parts that it's already cost effective for some applications. "We recently ran a batch of parts for an aerospace project," Andy tells us. "By nesting them together on the plate we managed to produce 50 at once, all slightly different. In the end we couldn't have produced them as cheaply or as quickly any other way." 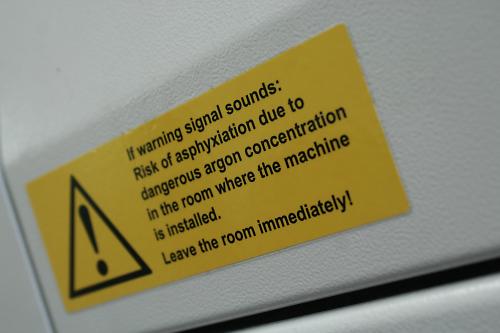 We're here to see not springs, but dropouts. Nick from Charge has invited us to see the sample production of a pair of dropouts for their new disc-equipped cyclocross bike. Peering into the machine, all you can see is a couple of squares of metal, surrounded by the powder; on each layer there's a burst of sparks as the laser etches the design before the bed drops infinitesimally (each layer is 0.03mm thick) and another layer of powder is dragged over the top before the laser fires again. As you can imagine, this isn't a quick process. When we arrived mid-morning the DMLS machine was most of the way through its run; it had finished the drive side dropouts and was busy printing the last bits of the disc tab on the non-drive dropout, but it wasn't until after lunch that we were able to open the oven door and see if they'd baked okay. 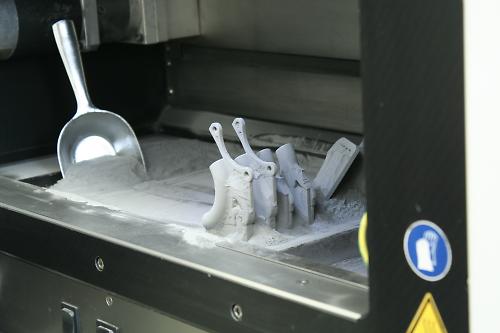 Getting the parts from the machine is a bit like an archaeological dig, carefully removing the loose powder around to reveal what's been made. Andy's suited and masked for this part of the process. Titanium powder isn't the greatest thing to be inhaling, and everyone's a touch nervous until we can see that the run has been a success. The dropouts are held in place by semi-solid support structures, made by printing on every other layer. The dropouts are transferred to an oven, where they get a few hours of heat to relieve internal stresses in the parts cause by the manufacturing process. Once the oven time is complete it's just a case of breaking the supports away and you have what's basically the finished part. The finish out of the machine is a bit sandpaper-like, so the final step is to tumble the parts in a polishing machine that's full of ceramic balls that gently smooth the surfaces and you end up with a sort of semi-polished finish. Once that's done, the titanium is so resistant to corrosion that nothing else is really needed; it's ready to go in the frame. 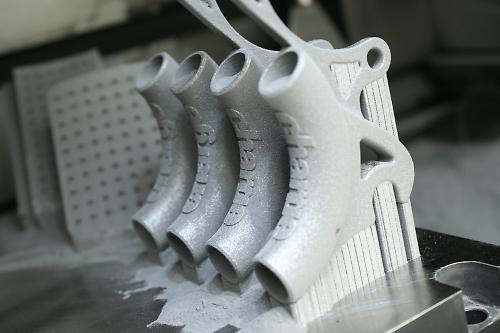 The total run time for producing the dropouts is about 18 hours; add to that the overnight cooking and a day of tumbling in the finishing machine to get everything nice and shiny, and you can see one of the current issues with making bike bits this way. It's not quick. And 'not quick' equals 'costly'. Nick wouldn't say exactly how much producing the dropouts this way would add to the frame, although he assured us that the finished article would be "reassuringly expensive". The reality at the moment is that there's only a few applications where this technology can produce cost-effective results. But that's not to say that it'll stay that way. Producing a batch of 50 dropouts would take 40 hours, reducing the per-unit time considerably. And that's with the current technology which, though impressive, is still very much in its infancy. Rapid prototyping machines, that produce parts from plastics, used to cost as much as a DMLS machine does now not so may years back. Skip to the present and you can pick one up, albeit a basic one, for less than a grand; Cannondale, we're told, have one in the office for knocking out sample designs that you can hold in your hand. A poster on the door of the DMLS lab proudly trumpets EADS' innovation; the picture accompanying the blurb is of an entire plane being printed. Fantastical? Of course. But the machines will get bigger, faster and cheaper because that's what happens. How long until it's feasible to produce a whole frame using this process? The working area only needs to be about three times as big. Cue the ability to prototype a metal frame with similar material qualities as one produced by another method, hydroforming for example, without the massive cost of tooling up. Or the ability to take a set of custom rider measurements and print a frame to fit. You could have your name etched in the top tube too.

From there it would only be a case of mechanising the processes of removing, heat treating and finishing the parts‚ all of which is currently laboriously done by hand, and you have a realistic production line for knocking out layer-manufactured parts and the costs go tumbling. We were printing four dropouts; if you were printing 1,000 at a time and the heat treatment and finishing were automated, that might be enough to make it a viable option. One thing's for certain: this technology will improve and expand. This won't be the last time you hear about it.