The southern Alps are only a figurative hop, skip and a jump away, and offer fantastic riding, as one jammy bugger from road.cc found out…
by Max_Leonard

It's annoying, isn't it, when people talk about fantastic riding country somewhere exotic that happens to be their local loop: 'I can ride into the Santa Monica mountains straight from the front door.' Or the guy who says things like: 'Oh, I don't need a winter bike.'

Well, what if I told you that about 80 minutes away (by plane, admittedly), there's sun, good year-round riding and some fantastic mountain roads? Wouldn't you be tempted to live the Colnago lifestyle on a Carrera budget? The Alpes Maritimes, despite being covered as part of Rapha's Great Road Climbs of the Southern Alps book, are still relatively unknown to UK riders, overshadowed by their big brothers up north - the high Alps proper - and the Pyrenees to the west. Yet there's still some chunky climbs here, within sniffing distance of the Med, as well as a lot of road cycling history, and a dollop of modern pro culture too. 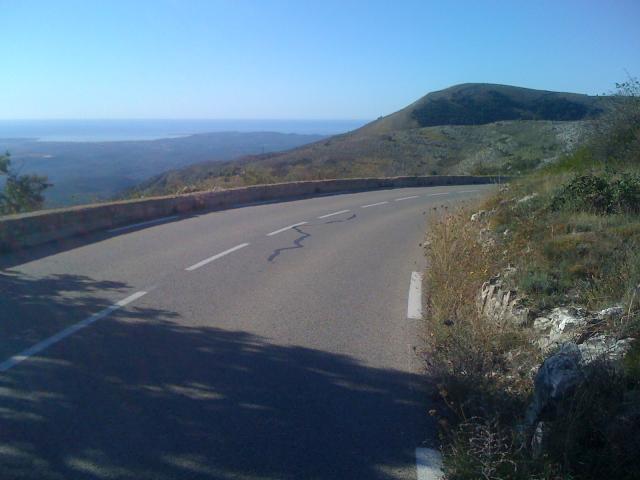 Having travelled to the area for work, I took a few days off afterwards with my bike to have a nose about (stop me if I'm becoming that guy). In Nice, the geography is quite easy to get your head around. There's a big blue thing to the south that's called the Med. Then there are the mountains and the coast road. Go west and it's busy until Cannes, after which you get into the Esterel national park. Go east and you're on the James Bond road, the Basse Corniche to Monaco - all sheer rock faces, half-hidden villas and sparkling sea below. A bit past that and you hit Italy - so the Poggio's within an easy 100km ride. Going north, there are two river valleys to follow from town: the Var and the Paillon, with busier arterial roads (and cycle paths) to whisk you away from civilisation and into the mountains in relative comfort.

Anywhere else, and you're going up, and pretty quickly, because this is where the Alps hit the sea. For starters, there's every Anglophone's reference climb, the Madone, which Lance used to hurl himself up. That hits 927 metres on the altimeter only 14km from the promenade at Menton, east of Nice. But most of the local clubs head for the Col de Vence to test themselves. It's a 963-metre hump with great sea views, west of town. From the start, at the fountain in the pretty main square in Vence, it climbs around 550 metres to the top. If you're Contador, you'll do this in 22 minutes; if, though, you're not, and you haven't had your steak for breakfast, it'll take considerably longer - but it's a lovely climb. 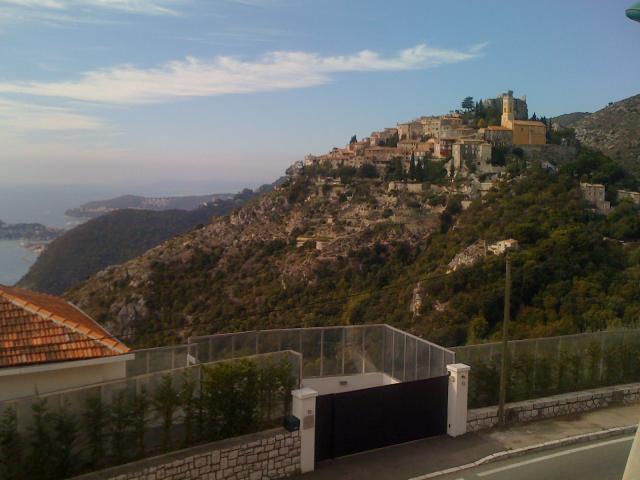 Then there's the col d'Eze, which climbs from a junction slap bang in the middle of Nice, and takes in those lovely roads they ride in the finishing loops of the Paris-Nice, up to La Turbie and back down to the Promenade des Anglais, but the real jackpot is when you head properly inland - towards climbs like the cols de Braus and Turini (made famous by the Monte Carlo rally), and the Madone d'Utelle. Here, you quickly emerge from the hustle of the Côte d'Azur on to small, quiet roads that lead into the high Alps through breathtaking gorges, and past beautiful villages perchés - mediaeval villages loftily perched high on rocky crags. Through the Mercantour national park there's some seriously high peaks. The col de la Bonette, the highest paved road in Europe, is feasibly within riding distance, and there are huge, lonesome open spaces, complete with wolves (of the type that keep themselves to themselves). What more could you want? 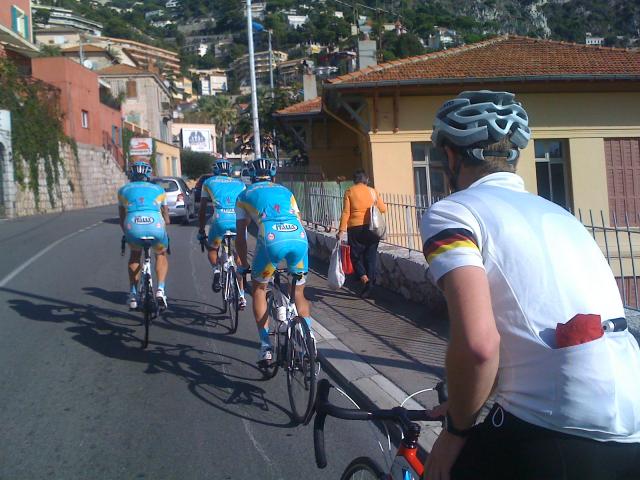 Oh yeah: pros. Outside Nice, along the coast road towards Monaco, we spot a group of riders up ahead dressed in bright blue. We catch them up, and, yup, it's Astana (clearly they weren't trying). Remi di Gregorio and two others, spinning their legs out… and then Vino, further along the road, powering towards us up a hill with his race face on. Though looking at his Chrono des Nations result he should maybe have gone harder. Many pros, including Thor, choose Monaco as their conveniently tax-free home (yup, cyclists do that too), so it was almost surprising we didn't see more. Aside from the pros, the local riding talent seems to divide itself neatly into stick thin young Italians who'd drop Pantani; walnut-coloured, sinewy 50-year olds, who could take down a cat-2 rider half their age; and portly old bullfrogs in saggy, faded winter kit (mainly FDJ or - weirdly - Banesto), wheezing their way in formation up the climbs. I rode, most of the time, with Cycle Côte d'Azur, a cycling guiding and touring company based in Nice, run by Ironman (should that be Ironwoman?) Claire Scrutton and former Olympian track cyclist, and Commonwealth bronze-winner, Emma Davies. They provided guided rides as well as self-guiding cheat sheets, and a wealth of local knowledge. Which came in handy when my slightly overoptimistically epic ride planning hit a wall of freezing impossibility. What do you mean climbing over the Bonette, then over another two 2,000-metre-plus cols, into Italy and back, in October, is too ambitious? We did make it up Bonette but, after accepting that frostbite wasn't a great holiday souvenir, we warmed up with coffee and pizza, and they suggested a wealth of other options, so we weren't disappointed by the diversion.

Cycle Côte d'Azur are keen to stress the convenience, the good weather (warm and settled from mid-March until mid-October), year-round riding up to 1,000m, and the family-friendliness of Nice. What with the beach, the culture and the museums, you might even be able to convince the family to come out too. Judging by the fun that was had, I'll be back. It's not so bad being that guy, you know.

You can fly to Nice from all London airports and most large UK regional airports including, and if you are flying with your bike it's also worth reading the road.cc guide to Flying with your Bike.

With thanks to Cycle Côte d'Azur, who are currently offering daily rides, weekend spring camps and special Paris-Nice and Milan-Sanremo packages. www.cyclecotedazur.com.