Tour of Britain stage 4 - in the press car

Following the leader: a day in the Tour of Britain press car

So. I’m in Minehead, I’ve got a VIP pass. It’s access all areas and I’ve already chalked up a coffee, croissant and quick interview with Ned Boulting. I’d spotted him a week before, grabbing a cuppa in Honiton during the South West Tour Ride, so we’re practically family. Nice bloke. Then it all goes horribly wrong.

I ask a podium lady which rider she would prefer to see on the podium, seeing as she’d have to kiss him. She could have given a merry laugh before tossing back her lovely blonde hair and saying that they were all gorgeous, even Dan Martin. But no, she looks at me as if I’ve asked to borrow her knickers and says that actually, her boyfriend is one of the riders, she doesn’t have a favourite and unless the disgusting little reptile in front of her has some less pervy questions she’d quite like him to crawl back into his grubby little hole. Well, that’s what her face says. I scuttle off to look at bicycles. It seems safer. 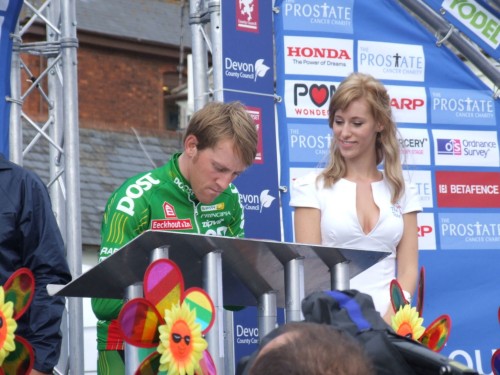 Meanwhile, riders are milling around the Depart area, signing in, being interviewed by a talkative Timmy Mallet lookalike and not ogling podium girls. No, no, not at all. Except for Team Sky who hide in their big black bus, which glides in like a space-cruiser and instantly attracts a huge throng of fans. I half expect it to split down the middle with Wiggy, Geraint and co emerging in a cloud of dry ice to Ride of the Valkyries. I never found out if they actually did because Pete the driver is beckoning me to join him in the Press car that would be my home for the duration of the race. Me, a hack from the local rag and a Proper Cycling Journo who spends the journey swearing at the lack of wireless internet access in North Devon and working on his laptop. An interview with Nicolas Roche, although I’m too polite to try reading it.

Now, being in a Press car, rolling with the race convoy is, of course, unspeakably cool. What is slightly less cool is not seeing much of the race. Instead race radio (when it works) crackles with commentary, split times and ride numbers. “Colnago for rider 72 please”, “moto, please leave a gap, you’re too close”, “Garmin, forward for drinks service please”. Police riders zip past in relays, every schoolkid in Somerset and Devon is lining the route, convoy vehicles get cheered and waved at and everyone is having a bloody good time. I’d bet that plenty of them don’t know there’s a bike race on, they just know that Something Important is passing through town and they’re damn well going to cheer it. Grey skies and drizzle? Pah, I shall fend them off by waving my Tour flag at the grinning berk in Press Car 2! Proper Journo is listening intently. He’s writing a rolling online commentary (when the North Devon hills let him) so he needs names, times, splits. I get the fever too and start writing down everything. It takes me the whole race to realise that there’s no point but it makes me feel like a pro. Simple things…

We’re stuck behind the chase group and the break (Dan Martin, who gets the Combativity Prize for the day, plus Matthew Hayman and Jonny Hoogerland) but Proper CJ wants to get closer. Driver Pete responds and beeps his way past the chase group. I’m crawling all over the other hack in the back, trying to lean out of the window for pictures. I’m rewarded with Richie Porte weeing on a house, Geraint Thomas’ nose and half of HTC doing what they always do, leading the chase. I’m well pleased and settle back to prepare myself for what lies ahead. 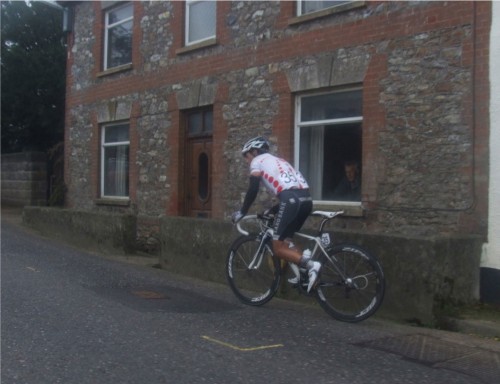 Sidmouth is heaving. Pete threads his way through narrow streets that are bulging with people. It looks like scene from Zombie Flag Wavers 2, except that they’re smiling and not trying to eat our brains. The zombies continue unabated up the improbably steep slopes of Peak Hill. Happy zombies in lycra and waterproofs, because they know that this is the best place to see the suffering up close and personal. 25% gradient? Check. Two loons in mankinis (accessorised by saggy flesh coloured pants)? Check. Cowbells? Check. :Leaping Devil? Check. It’s like Alpe D’Huez with clotted cream. The noise is deafening, the atmosphere incredible. If anyone doubts the appetite for good quality stage races then Peak Hill should convince them. It’s completely brilliant and I enjoy every second. 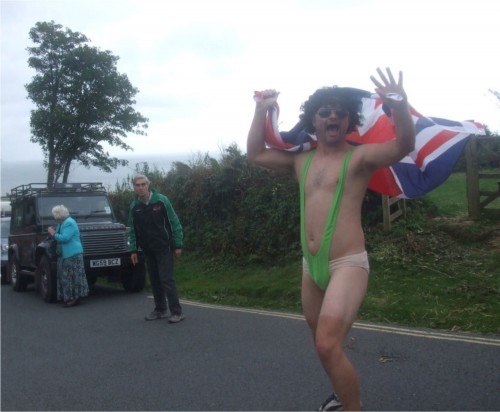 This stage was billed as the hardest of the Tour and having ridden it, I wouldn’t argue. It’s brutal. Two big climbs followed by endless short, sharp vertical stabs. There’s no respite, no chance to get into a rhythm and just roll. And it’s raining. No wonder two thirds of the field is grunting along almost half an hour behind the lead group. Race radio crackles again. “DS’s, the riders at the back will have to ride if they don’t want to be eliminated. Please pass this on to any teams who are out of radio range. They must ride”. Poor buggers.

Drama! Matt Hayman, Sky’s man in the break, has a puncture! Swift wheel change from neutral service, then they pace him for a yard or twenty as he blasts his way back to Dan Martin’s wheel. Then the race commissaire pulls alongside us. “That was assisting a rider to maintain position!“ he bellows from his perch on the back of a motorbike. Pete, our driver, pulls a noncommittal face and feigns incomprehension. We’re not sure if we are getting a bollocking for something we haven’t done or being asked to confirm what the commissaire thinks he has just seem. Either way, we don’t want to say anything in case we get a nasty case of being-thrown-off-the-raceitis. It seems a petty thing to get red-faced and shouty about and one of our number mutters something to the effect that maybe the commissaire hasn’t had his wheelnuts loosened in a while and should perhaps take advantage of one of the sheep that dot the stage to relieve his tension. Happily the moment passes and we speed on.

We overtake the break and are ordered to proceed to the finish. By now I’m feeling the strain of being sat in a cramped car for over four hours. We roll into Teignmouth just ahead of the race. Jump out, stretch legs and head for the crowds around the finish line. Just one problem, I’m bursting. Outside there is a huge roar of excitement as Wout Poels unleashes his winning sprint. Inside a posh portaloo, no-one hears my sigh of relief as I unleash a huge wee.

It’s been a fantastic day. Humiliated by a podium lady. Flash bikes to perve over. Actual racers, up close and personal. Borats. More cheering kiddies than you can shake a flag at. Huge, huge crowds. All that and a VIP seat in the convoy. All I need to do for next year is blag another seat and learn how to wee out of a moving car.

Thanks to Katie Robbins at The Prostate Cancer Charity for sorting us out with a seat and Driver Pete for getting us to the action.