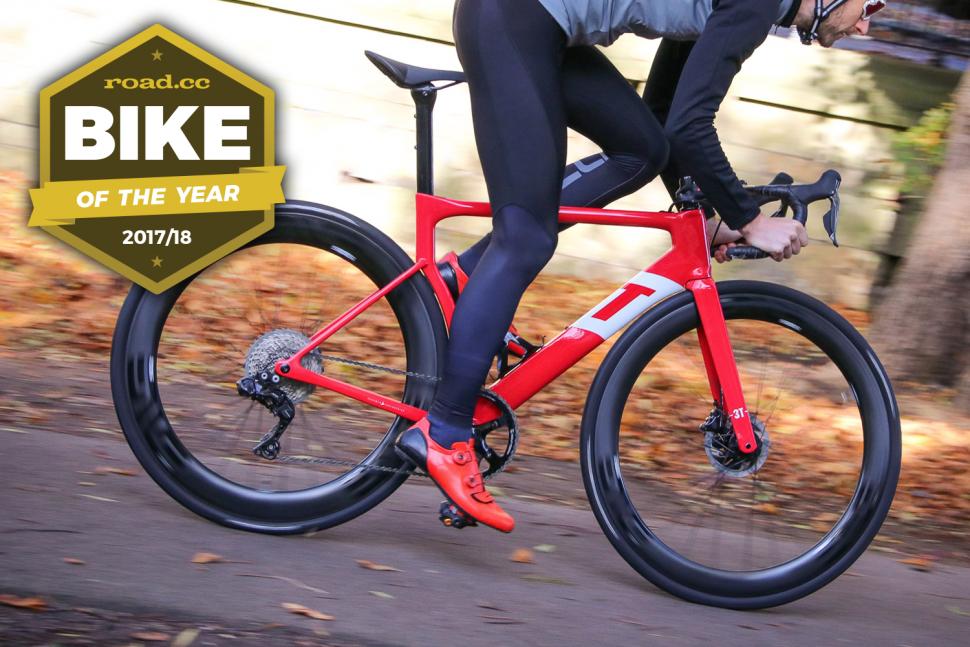 See all the winners in this year's road.cc Bike of the Year 2017-18 awards ceremony
by David Arthur @davearthur

We always like to kick the year off by first looking back at the best bikes we've reviewed in the previous year, and dishing out some awards to the bikes that have impressed us the most. Over the last week we've dished out prizes in a number of different road bike categories and yesterday we rounded it all off by getting all category winners together to decide which was worthy of the title road.cc Bike of the Year 2017-18.

In case you missed any of the awards last week, here's a recap of all the winners and links to the individual category articles. If you want to take a closer look. If you're looking for a new road bike this year, these awards are a very good place to start. Let's dive in...

Sportive and Endurance Bike of the Year - Specialized Roubaix Expert £3,500 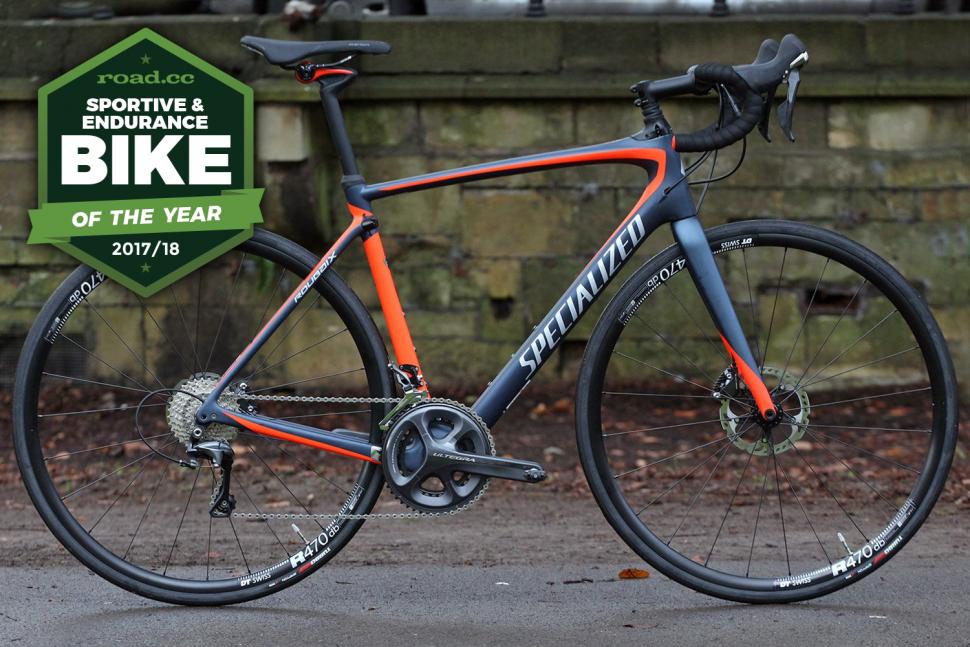 The most radically redesigned endurance bike on the year resulted in a radically smooth ride. For most of the Roubaix's existence, Specialized has employed small elastomer inserts called Zertz, placed in the fork blades and seatstays. With the new version the front end Zertz has been binned and replaced by the Future Shock, a small spring housed inside the head tube providing 20mm of movement, and Specialized's existing CG-R 27.2mm seatpost contained inside a wide diameter seatpost and a dropped seat clamp, to allow more deflection.

There's no doubt about it, the Future Shock works. It delivers a smoother ride than the old Roubaix SL4 and feels smoother than other endurance bikes such as the Trek Domane SLR and Canyon Endurace CF SLX. It's really good at reducing the high-frequency vibrations normally felt through the handlebar. Because the Future Shock is positioned between the stem and frame, it's only supporting your upper body weight. That means it's not soft and bouncy but is instead quite firm, yet soft enough to react to the smallest road buzz very well.

The Roubaix isn't just about the Future Shock.  It is available only with disc brakes, has clearance for up to 32mm tyres and it has an externally threaded bottom bracket. Specialized has also taken inspiration from its Tarmac race bike and provided a more aggressive and racy geometry in the new Roubaix. Overall, the new Roubaix offers a high level of performance with great handling, disc brakes and space for wider tyres. 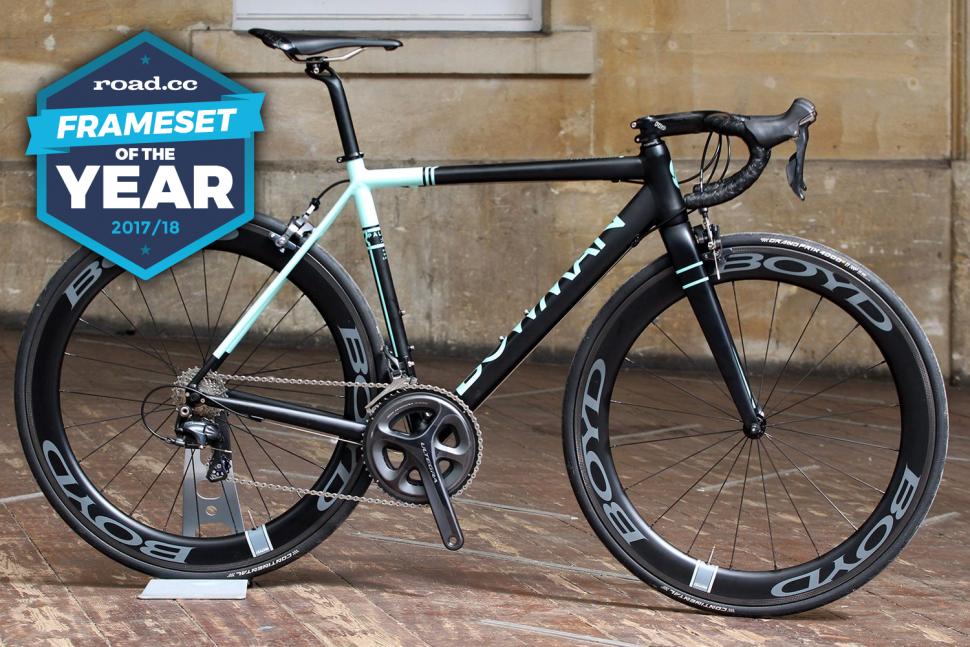 Bowman Cycles won the Frameset of the Year 2014 award with its stunning Palace aluminium road race frameset, and we were so impressed with the updated Palace:R frameset that it took the award again!

Delivering astounding levels of performance and excellent handling, the Bowman Palace:R is an exceptional race machine just perfect for pushing you up the points table in your local race league or smashing that PB on your favourite loop. It's better in pretty much every single way.

If you want an alloy bike to race or just... No, scrap that. If you want a bike to race or just get out there and blast around on, then the Bowman Palace:R needs to be right up there at the top of your wishlist. It's sensibly priced and you are going to struggle to find anything near it that offers such a punchy, thrilling and grin-inducing ride. 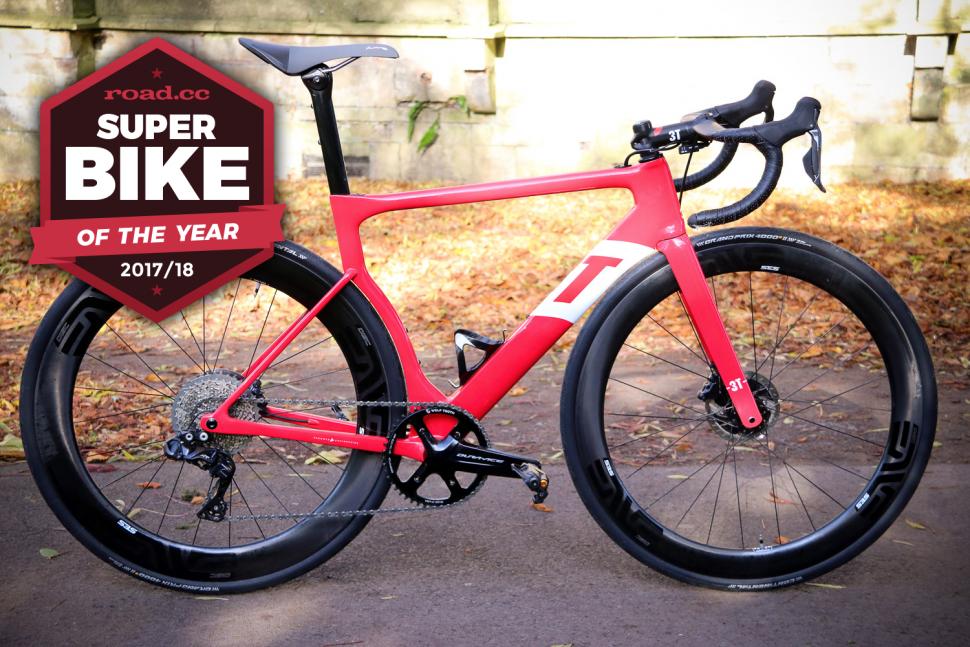 It’s not often that a bike comes along that can legitimately be described as radical, but 3T’s Strada is exactly that. It's a stunning bike with breathtaking speed, impressive smoothness and fine handling balance. Our man Dave got the overwhelming impression that this is one of the most exciting road bikes available right now.

In short, what you get here is an aero road bike with disc brakes, a 1x drivetrain (with a single chainring) and enough clearance for 30mm tyres. Disc brakes and wide tyres are a well-proven combination and work to great effect on the Strada. Here's a race bike that descends brilliantly and copes when the weather turns bad. The wide tyres provide a high level of traction, which is a real benefit on sodden roads. 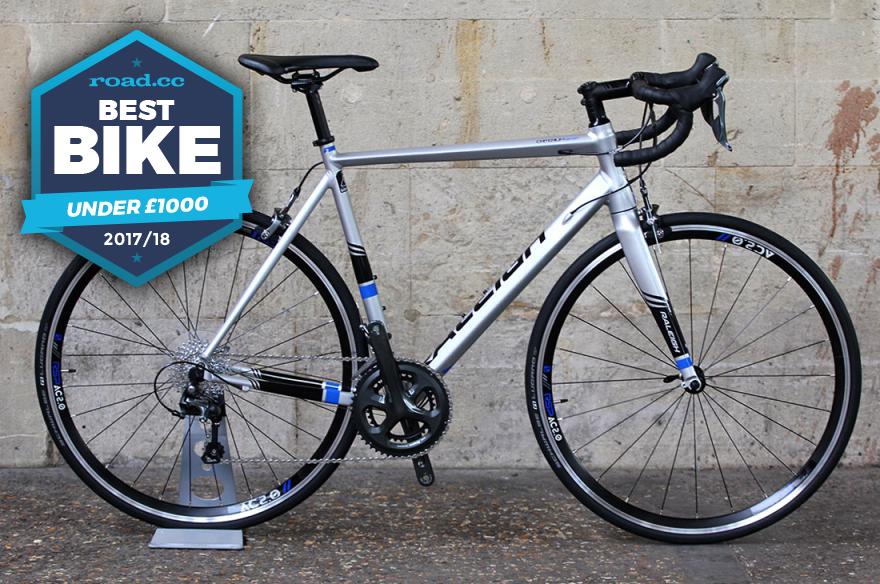 The Raleigh Criterium Sport is proof that you don't need to spend a huge amount of money to get a great road bike. It offers a well-designed aluminium frame, a carbon fibre fork and a full Shimano Tiagra groupset, which all comes together to provide a brilliant ride. This is a cracking bike for the money and one that isn't easily embarrassed by more expensive rivals.

It's a much more involving ride than many at this price. The geometry is well judged and the carbon fork and aluminium frame come together to give a good level of agility; it'll suit wannabe racers as much as sportive challenges. If you like to really throw your bike around the road, powering out of the saddle to sprint over rises and belting through corners as fast as you dare, the Criterium Sport indulges. 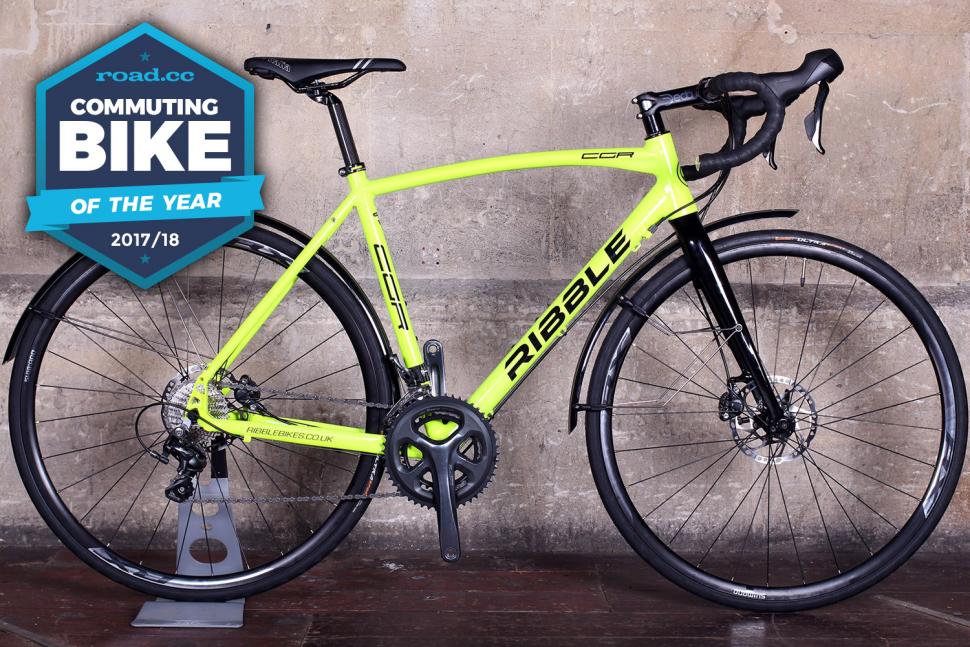 The Ribble CGR has all the credentials to make a great commuting bike, whatever the road or trail you might have to ride along to get to work.  A disc brake-equipped, mudguard-shod 'do a bit of everything' machine that makes a lot of sense for the rider who doesn't always want to stick to the tarmac.

With a long wheelbase, mounts for mudguards and racks plus being designed for disc brakes, the Ribble is likely to see a lot of use in the wet and cold of winter where the road surface is often less than ideal. Compared to a normal road bike, the CGR gives you the added bonus of extra tyre clearance, up to 35mm with guards, and disc brakes for consistent stopping in all conditions. It's not the quickest or sharpest handling bike out there, but it is very good at what it's designed for.

Adventure and Cyclocross Bike of the Year - Kinesis Tripster AT frameset £699.99 (frameset price) 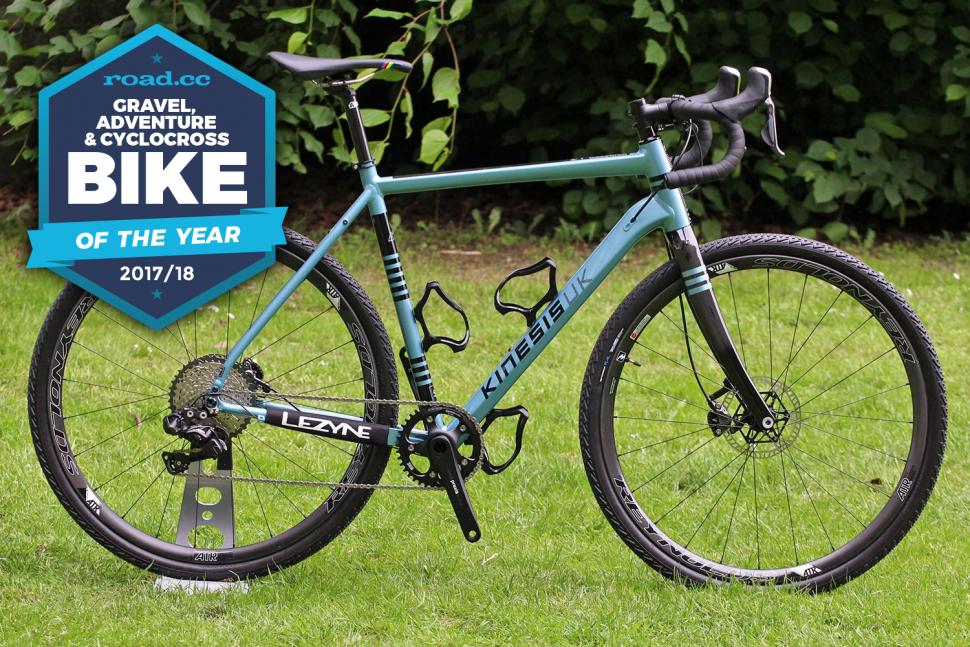 The British designed Kinesis Tripster AT is an aluminium version of the company's much-loved titanium Tripster ATR, but much more affordable. We tested the bike as a frameset but you can buy the complete bike for £1,699 with a SRAM Rival 1 build kit. Building your own bike gives you all the freedom to spec the bike to suit your requirements, and the test bike offers one such example of a cracking build suitable for road and off-road riding.

AT stands for All Terrain and that sums up the ambition and capability of the Tripster AT perfectly. I've ridden it everywhere and over everything in the few months I've had it, and apart from very rough mountain bike trails where any adventure bike would be out of its depth, there's really not much that fazes it. You can bimble along the road quite happily and keep up with road riding friends at sociable speeds, yet turn off the road and explore trails and paths to your heart's content.

Kinesis has designed a really nice bike in the Tripster AT. It's taken the best bits from the more expensive Tripster ATR and reimagined it in aluminium, and added some useful features along the way. It's a frameset that offers a multitude of build options from a fast road commuter to a large-tyred bikepacking setup for bigger adventures. Add in the great value and it's easy to see why the Kinesis walked off with the award this year. The Road Team Carbon continues the theme of fun and exhilarating bikes delivered by Boardman that also manages to offer excellent value for money. You can't argue with the performance or kit from this entry-level racer, and the frame is so good it'll be well worth upgrading the parts as and when you can.

The Team shares the same geometry as the SLR Endurance, which means the handling is quick but never feels twitchy, so should your tyres break traction slightly front or rear it's really easy to keep control. It's very reassuring, especially if you aren't the most confident of bike handlers and find yourself in a bit of trouble.

We're fans of aluminium bikes and normally at this price point we'd take an aluminium alloy frame over cheap carbon, but Boardman has shown here that a good carbon frame can be delivered at this price point. The Boardman Road Team Carbon is currently discounted to £900, making it an ever better buy than when we reviewed it at £1,000.

And so to the biggie, the overall best bike of the past year... and the award goes to the most radical bike we've seen in a while, the 3T Strada.

It's a head-turning bike and it's clearly not for everyone, but it's an exciting and interesting vision of where bikes could be heading in the future. Or it might just be a one-off. But what a stunning one-off it is.

The 3T Strada takes a lot of the current trends that we like - wide tyres, disc brakes, aero, 1x11 - and combines them into a bike that is cleverly designed. And the result is a bike that offers breathtaking speed, impressive smoothness and fine handling balance.

It's designed around wide tyres because they are fast and comfortable, and the rest of the bike is designed to be as aerodynamic as possible. Going with disc brakes has freed up key parts of the frame and fork to be optimised for aerodynamics. Disc brakes and wide tyres are a well-proven combination and work to great effect on the Strada. Here's a race bike that descends brilliantly and copes when the weather turns bad. The wide tyres provide a high level of traction.

I have never ridden a bike that combines such astounding speed wrapped up with superlative comfort. Even though it's rolling on tyres that measure 31mm wide, it's as fast, if not faster, than many of the best race bikes I've tested. And it's more comfortable on my rough local roads than any other aero road bike; heck, it's as comfortable as some endurance bikes.

And it's for all those reasons that the Strada took the top price in our annual road.cc Bike of the Year Awards. But what do you think of the bikes we've picked? Let us know in the comments below... Here's to another exciting year of testing road bikes!