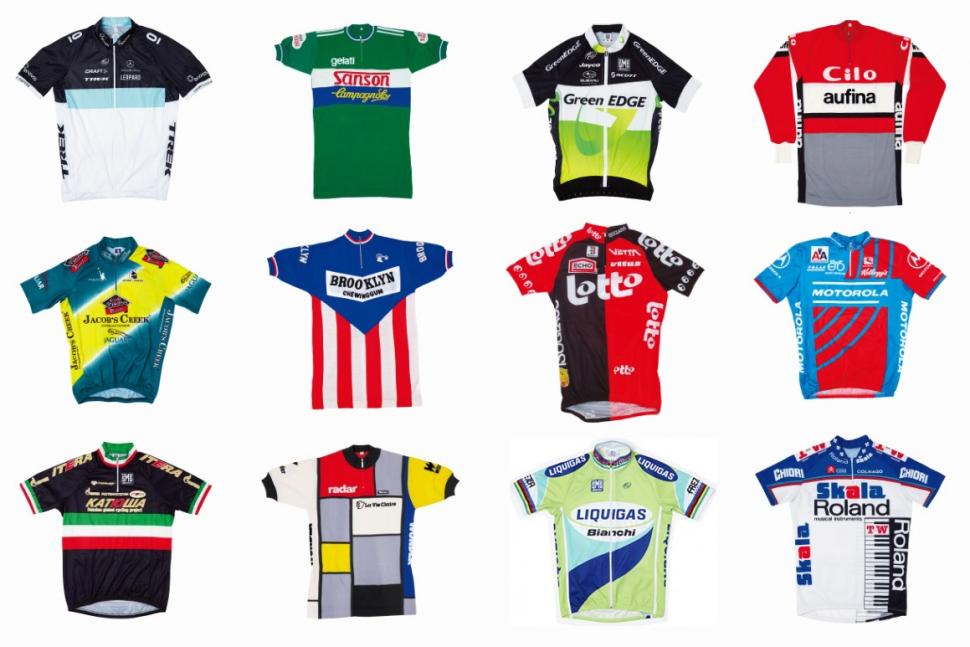 The Art of the Jersey montage.jpg

From Brooklyn to GreenEDGE, here are 12 of cycling's iconic jerseys and the stories behind them
by Simon_MacMichael

Father's Day is coming up, and if you are looking for a present for a cycling-mad parent (or want to drop a not-too-subtle hint to your offspring), we reckon the recently published The Art of the Jersey book from avid collector Andy Storey of Prendas Ciclismo would make an ideal gift.

Here, Andy talks us through his 12 personal favourites from his collection - they are among more than 200 featured in the book, published in hardback last month by Mitchell Beazley and available online from Prendas Ciclismo here. 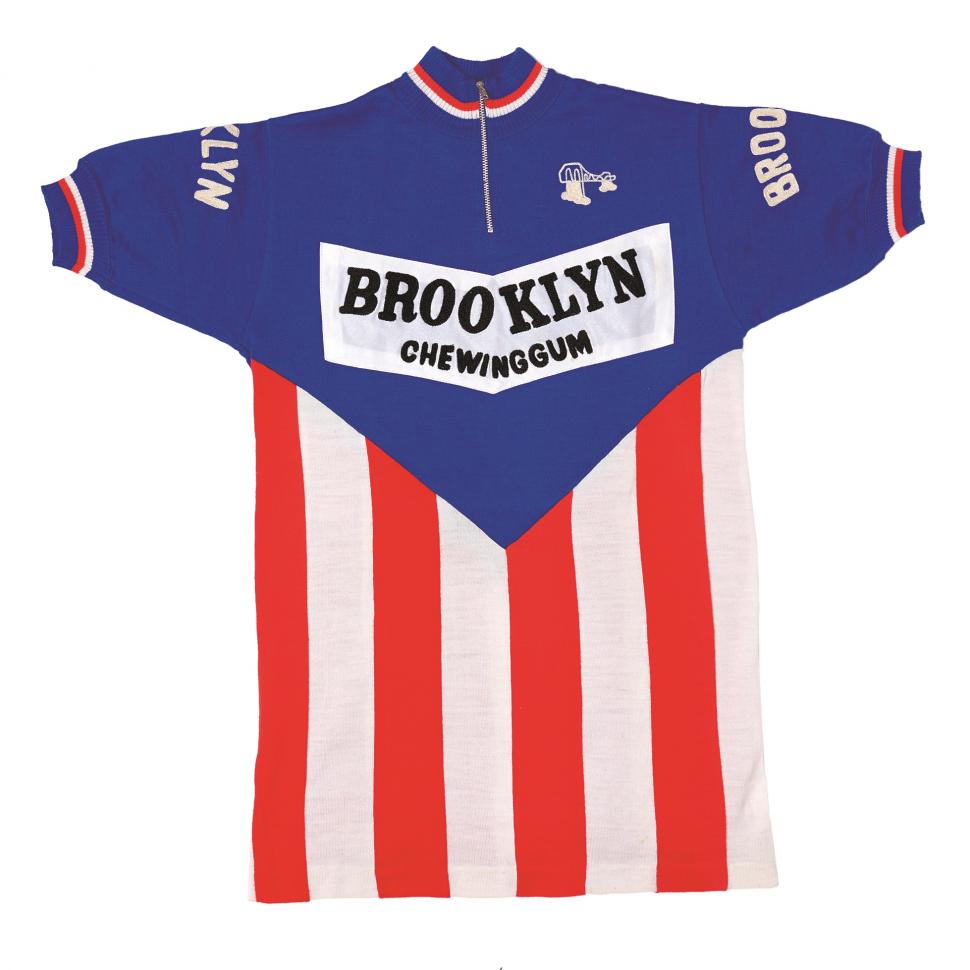 Out of all the wool jerseys I've had the pleasure to photograph, this original wool jersey, made famous by Roger De Vlaeminck, is a beautiful design, especially considering that sublimation printing techniques were not to come along for another 15 years. The stripes were achieved by stitching together panels with the sponsor panel made from white fabric, stitched on to the jersey with the sponsor’s lettering embroidered in black. 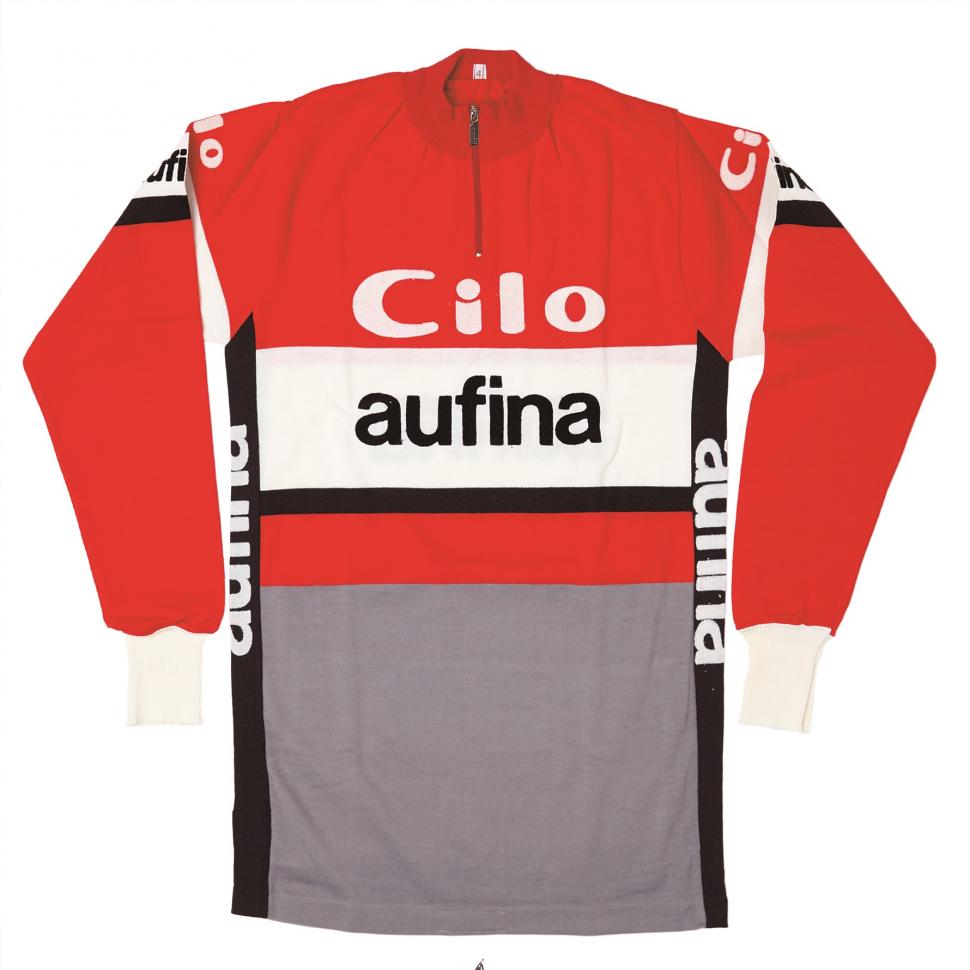 The minimalist and classy design of this wool jersey is superb – instantly recognisable to those who remember the 1980s peloton. Still made of wool, the logos are flocked onto the jersey – a process that allowed more complex logos than embroidery – but was prone to failure after repeated washes. 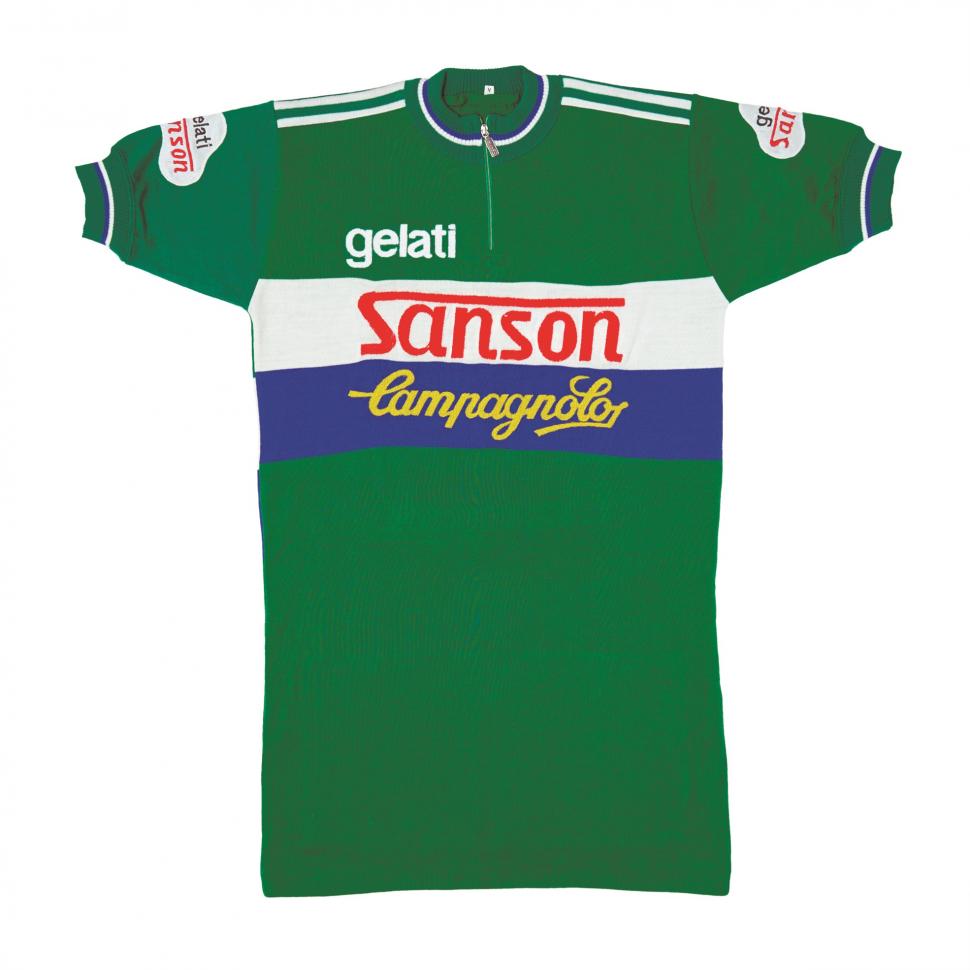 Inextricably linked to the imposing figure of Francesco Moser thundering across the cobbles, this iconic Sanson jersey is a great example of how a simple, yet striking design can stand the test of time. The deep green colour and style of the jersey no doubt influenced Sir Paul Smith when he designed the “Grand Départ” celebration jersey for the 2007 Tour de France. 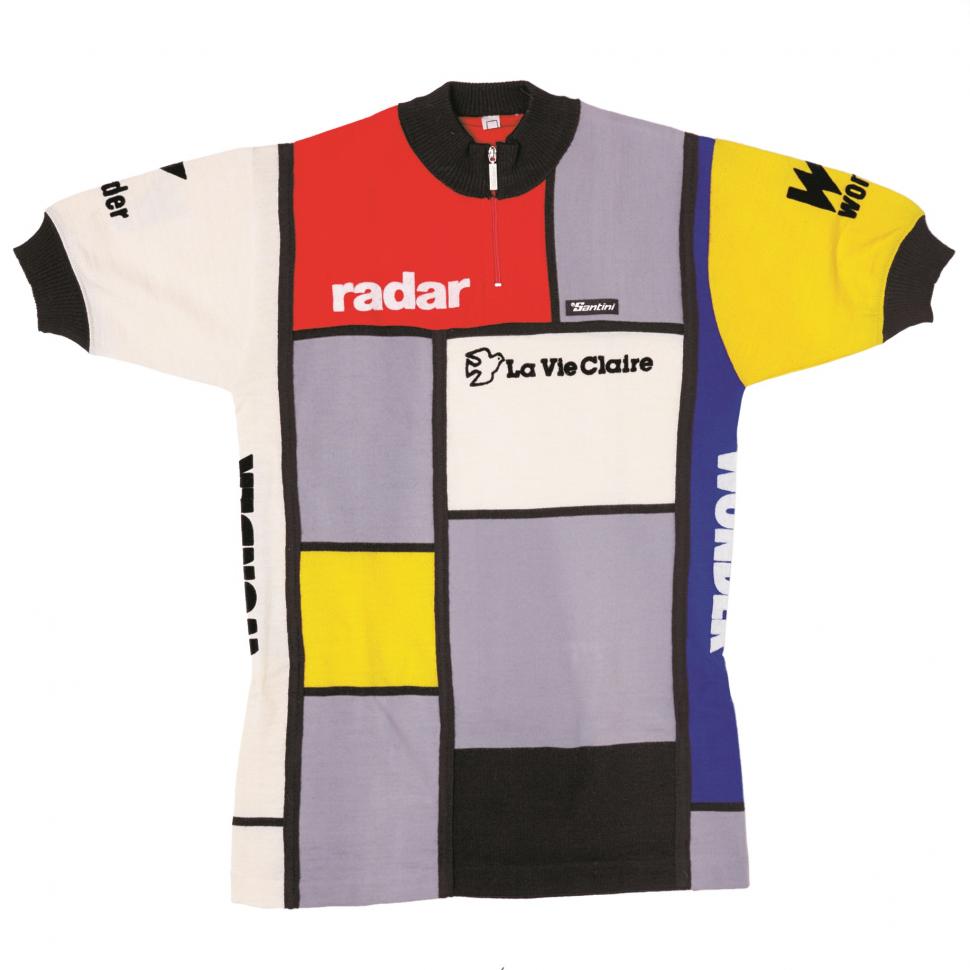 Pietro Santini's favourite jersey design of all time, this jersey was created at the same time that the pro teams were swapping from wool/acrylic jerseys to modern polyesters. It was constructed using several different panels of wool, stitched together to provide the geometric Mondrian-inspired pattern. 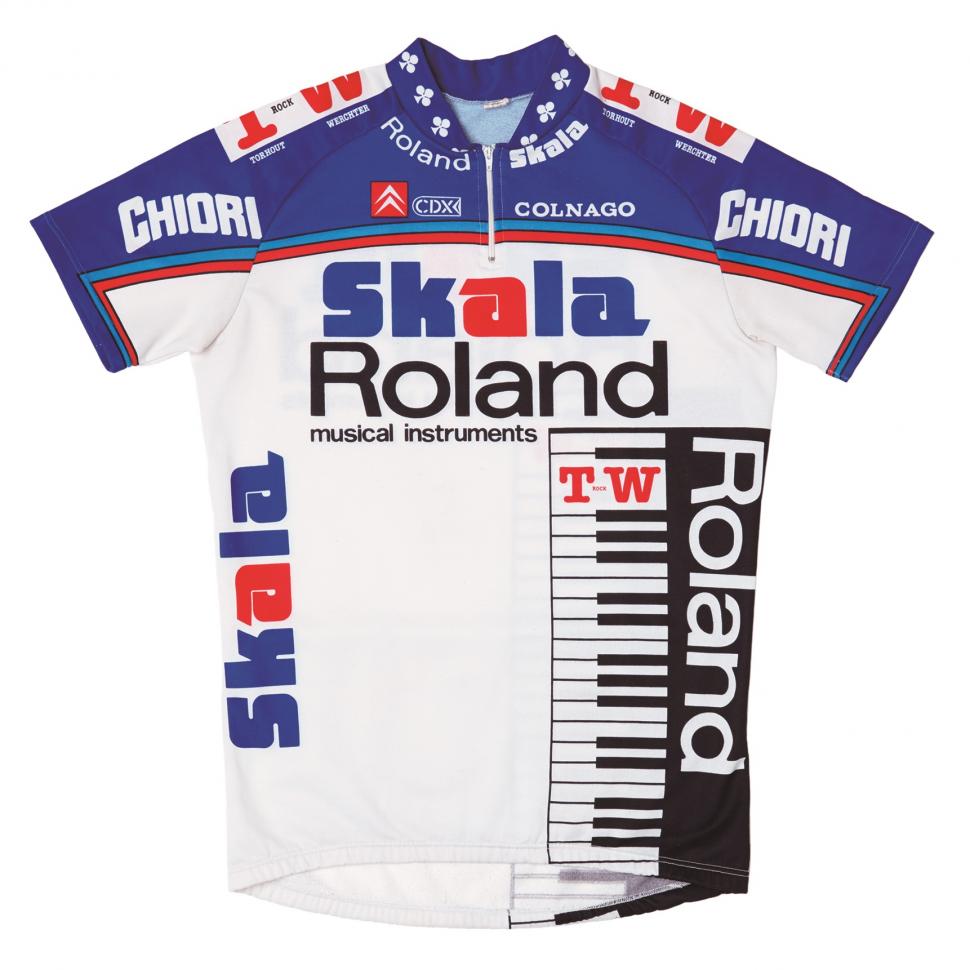 This jersey probably comes as a surprise to some being in a "top 12" list of jerseys, but it's the memories that it evokes for me. When I first started riding on the road, I remember a fair few club riders wearing this jersey design at the end of the eighties, the big keyboard on the front making it stand out in a way unique to that decade. The design of this jersey has always been a personal favourite, perhaps because the colour-coordinated Eddy Merckx MX-Leader bikes made from Columbus tubing were always popular in our house. While in-race communication with radio is now commonplace, it was the Motorola team that broke this technology, largely thanks to the technical expertise of their main sponsor. I know, revelations of doping have brought Lance Armstrong from hero to zero in recent years, BUT the way he broke away from the peloton into in the 95 Tour as a tribute to his late team mate Fabio Casartelli – will stay with me for ever. The simplicity of this Lotto team jersey is striking. The bold red, black, and white colour scheme and distinctive logos looked great in the peloton. This is the 1995 version, but it reminds me of the Andrei Tchmil’s win in the epic 1994 edition of Paris–Roubaix. Despite a stage win by David McKenzie in the Tour Down Under, wearing his new-look kit by Etxeondo, the team then went into free-fall with news that none of the sponsors had formally agreed terms with the team management. This left all the riders (including Bradley Wiggins who was just starting his road career) and support staff without jobs. This jersey was commissioned by Prendas Ciclismo to allow fans of “Super Mario” to enjoy his season with the Italian super-team Liquigas/Bianchi. The colour scheme of the team’s kit was a combination of the two lead sponsors’ corporate colour palettes, that's right, green is my favourite colour! In December 2009, Santini produced a one-off skinsuit for Filippo “Pippo” Pozzato to wear in a charity cycle-cross race, “Move to Improve”, which was organized by Tom Boonen and Wilfried Peeters in Mol, Belgium. Pozzato later wore the kit in the 2010 edition of Paris–Roubaix as a tribute to the late Franco Ballerini. Many modern professional cycling teams have up to 30 sponsors, each wanting their logo in a prominent position on the team’s clothing to get some return for their often considerable investment. I know how tough this can be having been involved with the design process myself – this year with the women's Drops Cycling Team. Leopard-Trek bucked this trend – using three colours and a minimal number of logos, the design of this 2011 aero jersey was seen by many as the correct way to do it. 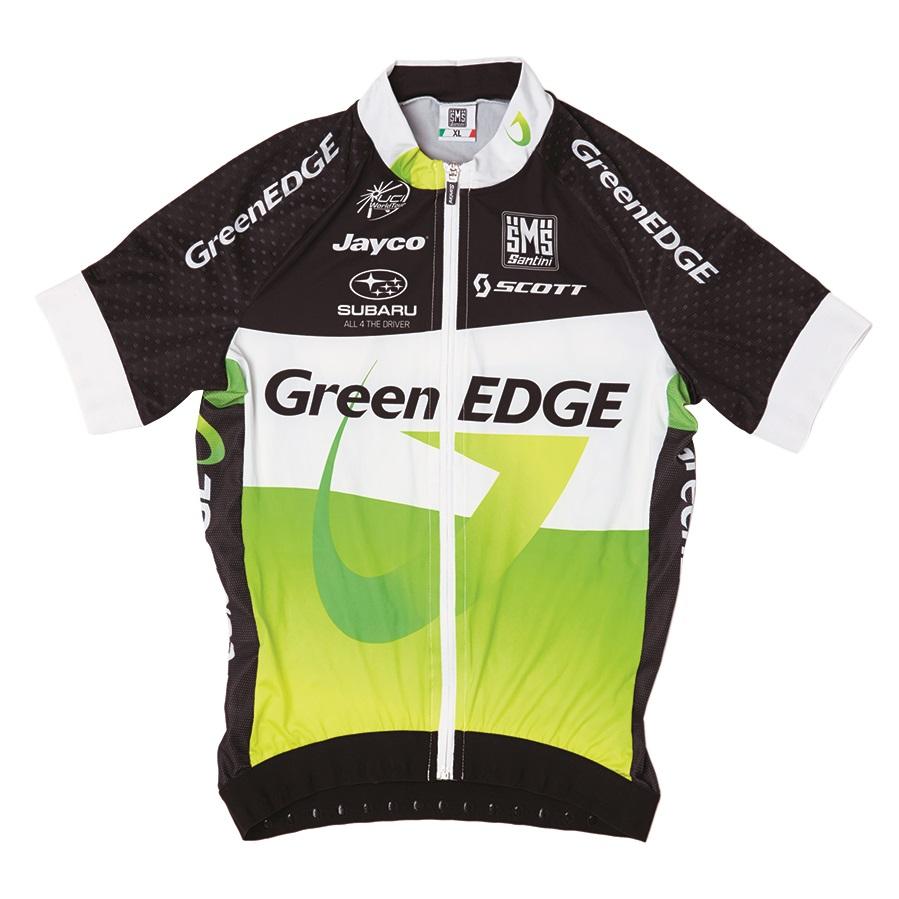 This aero jersey was released for the newly formed GreenEDGE team just after the Tour Down Under. Seemingly taking a design lead from the Leopard/Trek jersey, the design team at Santini produced this clean, elegant kit which went on to win Milan–San Remo thanks to Simon Gerrans (wearing the Australian national champion’s version of the jersey). Later in the 2012 season, Orica signed up as headline sponsor and the team created a new jersey which was not as eloquent in my opinion. 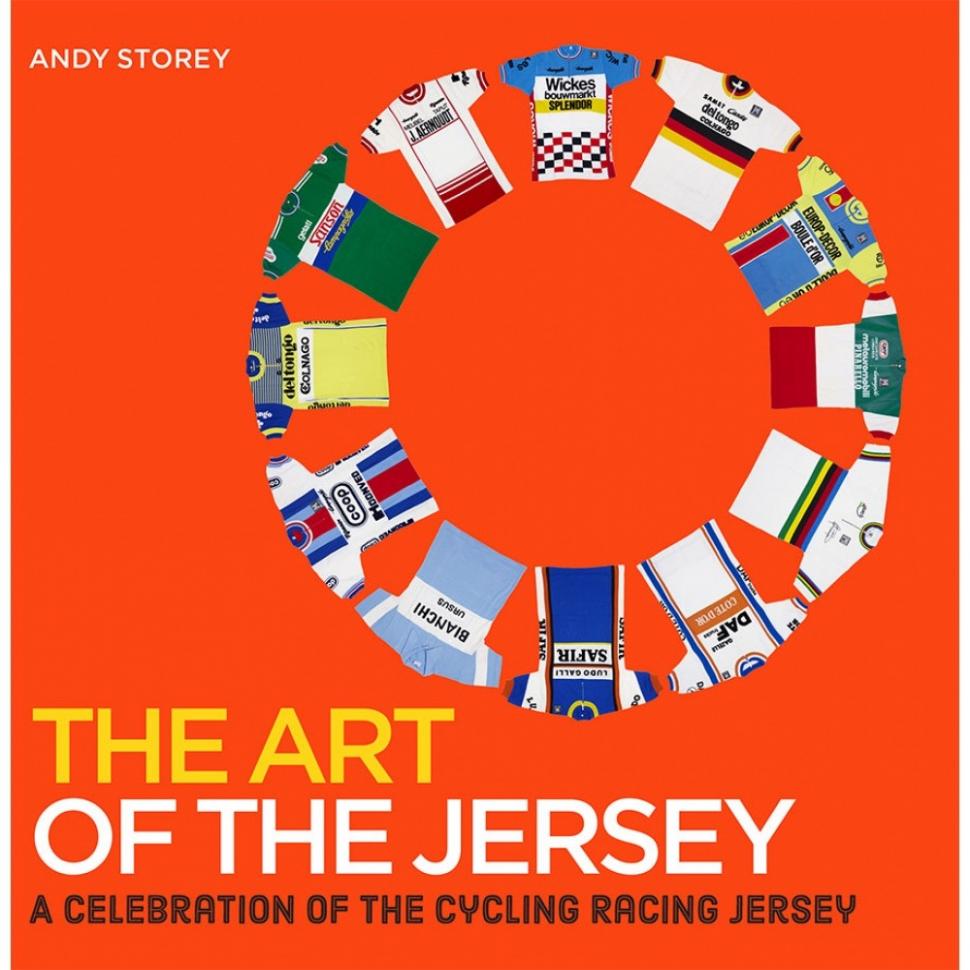 Subscribe
Prendas Ciclismo
The Art of the Jersey
jerseys