Sea, sun and soup at third Tour of Pembrokeshire

The weather threw a bit of everything at Sunday’s Tour of Pembrokeshire but still failed to take the shine off this hidden gem of a sportive set in deepest west Wales. Over 500 riders had signed up for the third edition of the small but perfectly formulated event and most were in place for a police-escorted mass start that saw them immediately gearing down for the 17% climb out of Saundersfoot. 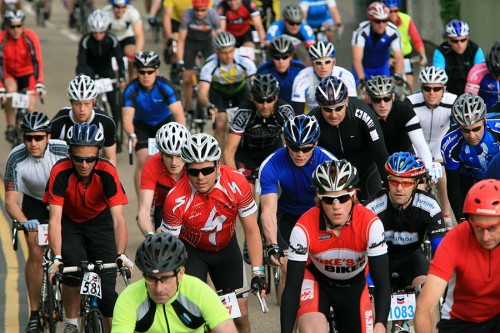 The seaside town is the Tour’s new base and the switch from Folly Farm at Kilgetty meant a few extra miles of A-road riding before the route plunged into the latticework of country lanes that is a such feature of this remote part of Wales.

Several miles later the Short and Medium routes – 63 and 82 miles – deviated west from the 117 mile Long route which continued towards Fishguard and Pembrokeshire’s rugged north coast.

Some riders were disappointed that this year’s routes bypassed the magnificent coastal road at Newgale with its testing climbs and fabulous sea views. Organiser Bryan Jones told road.cc that following an incident there last year between a participant and some horse riders, the decision had been taken to re-route the event to avoid any further conflict. The net result was a little more time on A-roads than many would have liked.

Around noon, after a dry, bright and intermittently sunny morning, the first spots of precipitation began to fall and what started as a light drizzle had become moderately heavy rain a couple of hours later. Adding to the challenge, early in the afternoon riders on the Medium and Long routes heading out of Pembroke town found themselves battling a stiff, energy-sapping westerly headwind. With long stretches of road fully exposed to the elements whipping in off the Atlantic, there was no choice but to grit the teeth, pick a gear and hang on until the turn. Sure enough, as the route swung south to touch the coast at Freshwater West, before slicing through the sand dunes and heading east, a healthy tailwind added several mph to everyone’s cruising speed. The last feed station, in the shadow of a Chieftain tank at the Castlemartin Ranges was a welcome sight and an opportunity to don rain gear, before what was for some a soggy dash for home that included 100m of steep climbing out of Freshwater East. 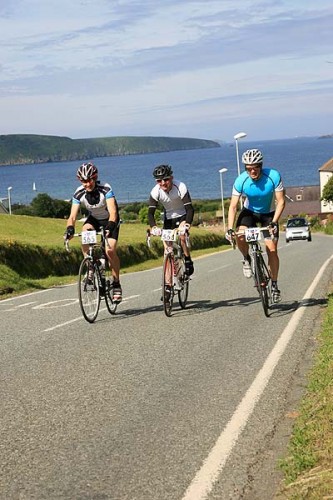 Once back at the Regency Hall in Saundersfoot, chilled bodies were warmed by piping hot minestrone soup while a small army of masseuses got to work on riders’ aching limbs. For some lucky souls, including this one, there was the ultimate post ride decadence of a masseuse for each leg, making it the kind of blissful occasion on which the only option is to lie back and think of England’s terrible goalkeeping dilemma for the match against Algeria.

Back in the real world, riders tucking into their steaming broth were quick to sing the praises of a sportive which, given its size and resources, punches well above its weight in terms of the feel-good factor.

“We like the homeliness of this event, the fact that it’s not a commercial operation and is raising money for the Wales Air Ambulance,” said Mark Walker from Cardiff taking part in his third Tour of Pembrokeshire along with pal Shane Thomas.

“And the soup’s amazing!” added Shane, polishing off a second helping that didn’t appear to be touching the sides.

Cheltenham-based Steve Williams was also participating for the third time. “I like the whole character of this event and I particularly enjoy riding the sections through the Gwaun Valley and Preseli mountains,” he said, adding that he’d probably be back again next year.

The fact that three riders picked at random had each taken part in all three editions of the event tells its own story. As for this participant, well, two out of three ain’t bad but barring warfare, tempest or other acts of God, the prospect of spectacular seascapes, superb soup and soothing hands will make it a case of jamais deux sans trois in 2011.

All pictures courtesy of www.sportysnaps.com