The White Horse Challenge is an entertaining 90-mile romp through the rolling chalk-lands of Wiltshire and Berkshire, past several of the iconic chalk figures that give the ride its name. Actually, it isn’t all so rolling. Some of those hills are quite steep. But over the past few years - 2010 was the fourth edition - this event has become well-known for its old-school ambience and friendly vibe. And with just 650 riders, it’s quite a contrast to some of the mega events that now feature on the UK sportive calendar.

The regulars from my local club in Chippenham took full advantage of an event on the doorstep, so a group of ten of us pulled out of the start at Shrivenham last weekend. The event’s relaxed ambience had obviously rubbed off; everyone in our little peloton was in a good mood, with a bit of chat and banter going on between the frequent warning-shouts of ‘hole!’ and ‘gravel!’.

The roads were muddy in places too, and this seemed to catch a few people unawares. We passed at least one bunch of riders helping someone get up off the tarmac.

The route was mostly flat for the first 25 miles, through Highworth, Castle Eaton, Cricklade and Purton. We seemed to be adopted by one of the mobile marshals, so riding through these towns behind a large motorcycle with flashing lights meant no stops - and gave a taste of Tour de France treatment. Well, almost. 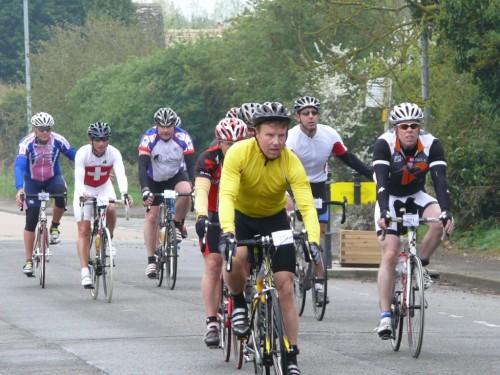 Once past Wootton Bassett we saw the Marlborough Downs escarpment, and our first white horse of the day. We also saw the first real hill of the day, dead ahead and unavoidable.

Suddenly all the chat went quiet as we toiled up the hill through Broad Town, but the views were worth it, especially when the sun came out just as we got to the top.

Then came a few miles of flat, before we swooped back down the escarpment, and tootled round the lanes to Compton Bassett and the first feed station. After quick refuel we were off again with a long steady climb over Cherhill, with the second white horse of the day high up on the grassy slopes to our right.

It was great to get a cheer from the crowds of tourists as we cruised through Avebury - once again we could pretend to be pro riders, instead of a bunch of wannabees - but pleasure turned to pain as we fought our way into the wind for a grim few miles along a busy main road.

Thankfully, a right turn took us off the main road. Unthankfully, it took us up the rather steep Hackpen Hill. But we passed our third white horse of the day and then enjoyed the next seven miles of mostly downhill to Marlborough.

Then came a delightful section of narrow lanes from Marlborough along to Ramsbury. There was very little traffic, the wind was behind, the sun was shining and - if you squinted a bit - the fields of rape-seed looked like sunflowers. This time it really was almost like being in France.

Another quick top-up at the feed station near Froxfield, then we turned north for a hilly section through Chilton Foliet and Lambourne – where we saw a few real white horses – finally swinging left towards Ashbury. Our group started to divide as legs were tired by now, but bike computers showed over 80 miles done, so the end of the ride was in sight. Wasn’t it?

But there was a major sting in the tail: the steepest hill of the day, about a mile of climbing up to Uffington White Horse. The view was spectacular, but most riders were sweating hard and couldn’t take it in. We were just glad to be at the top.

From there, a gravelly descent brought us back to the main road, and then it was just a few miles to go to the finish, where we were greeted with applause from early finishers and supporters enjoying the sun on the green outside the village hall. 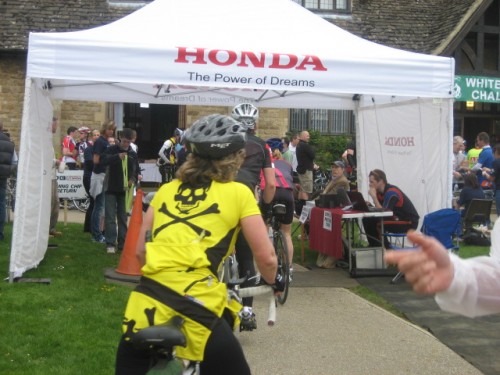 All in all, the White Horse Challenge was a splendid day out on the bike. A testing course, but not a real killer, and at 90 miles an ideal stepping stone for anyone making the shift from the more usual 100-km to 100-mile distances. The friendly atmosphere is another plus. Plus good feed-stations - and those helpful motorcycle outriders.

Full marks also to the organisers for encouraging riders to raise money for development charity WaterAid (www.wateraid.org). When not writing about cycling, your correspondent covers travel topics and has researched guidebooks in parts of Africa - and seen first-hand the results of WaterAid's great work. Around £30,000 has been raised by White Horse Challenge riders this year.

On a personal level, it was very enjoyable to ride this sportive with a group of club-mates for most of the way, to encourage each other along and enjoy some team spirit. Times for most in our little posse ranged from about 4hrs 45 to 5hrs 15 – not at all bad for a bumpy 90 miles. I’m sure we’ll all be back for more next year.