Your cut out and keep guide to 2014 WorldTour team kits

The 2014 race season is about to start and all 18 WorldTour teams have now revealed their new jersey designs. For some teams it's a complete fresh start, others have changed their kit very little from last season. 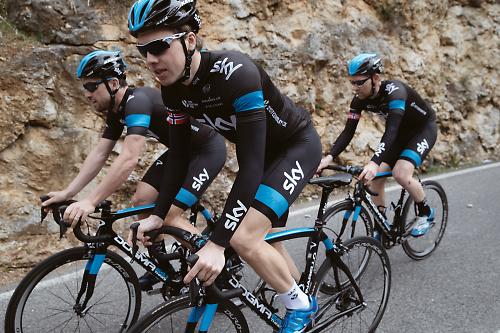 A trend has emerged: black is very much in fashion this year. Trek Factory Racing, Omega-Pharma and Giant-Shimano each revealed new kit with a predominantly black design. It's so slimming after all... not that most pros need any help in that department. Some are blaming Sky for this trend. However, blue is still a popular colour choice in the peloton, and green and red even get a good showing. Tinkoff get the award for the brightest kit. It really needs to come with some sort of warning.

Most squads retain the same title sponsors as last season, or add a couple of new smaller sponsors. There are a few big changes though, Trek stepping up as sole title sponsor of the former Leopard-Trek team and Giant replacing Argos to form the new Giant-Shimano team. 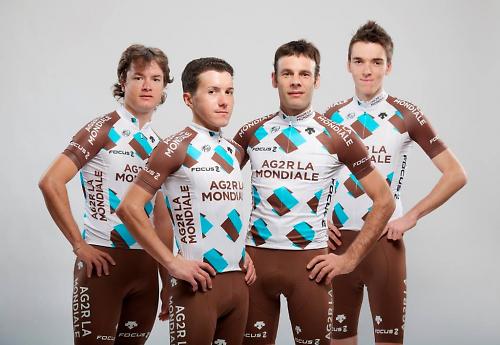 AG2R La Mondiale keeps its white and brown kit for another year; there really aren't too many sports team kits that are predominantly brown, are there? Little change for 2014, just a bit more brown on the jersey so the overall effect is that it’s a little darker than before. It certainly stands out, and it might just be me but I think it has grown on me. Mullets are entirely optional, down to the discretion of the individual riders. You either love or hate the Astana kit... or possibly have no strong feelings either way. It's only been tweaked for 2014, sticking with the baby-blue hue and adding in some odd yellow/white fades along the shoulder and around the back. The Astana logo, now blue rather than white, still swoops over the chest, and they’ve crammed a new sponsor in below it. It’s still a mess. 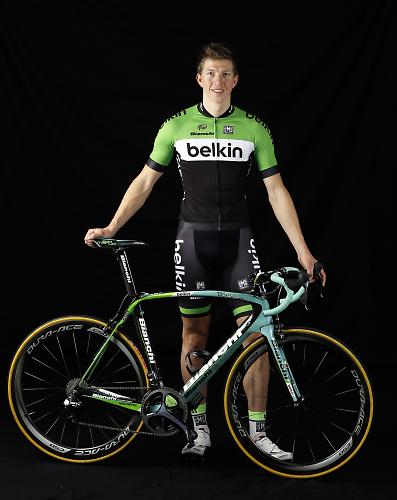 Green, white and black, the corporate colours of Belkin, who in case you don't know, is a huge manufacturer of wireless connectivity products - routers and stuff. Colour aside, it's quite a traditional design, with the white horizontal band framing the title sponsor. The green shoulders will make Belkin riders easy to spot in the peloton. Does the Belkin green go well with the Bianchi celeste? Well, that's questionable at best. In fact, let's be honest: no, it doesn't. 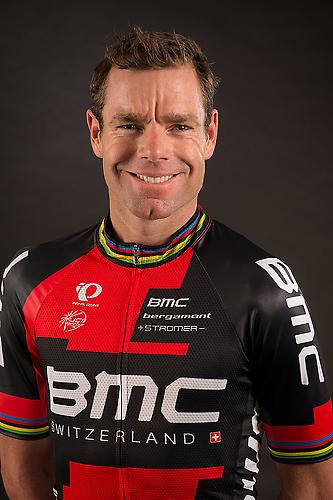 BMC, the lazy so-and-sos, haven't bothered to design a new strip for 2014. Instead they're sticking with the 2013 kit, a red and black design with large intersecting blocks; a sort of pixilated look. The good news is that if you bought a replica kit last season, it's still current this season, which will please the thrifty among us. 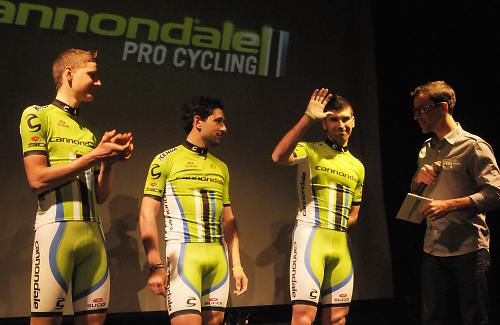 Like BMC, Cannondale don't appear to have made any changes to their kit, sticking with the lurid green with white side panels and odd vertical stripes above the waist. I'm not a fan, but you have to admit that it's distinctive. 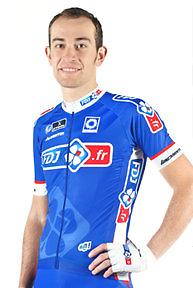 The French team switched from white to blue last year, a move which shocked many ('shocked' might be a bit strong, thinking about it). They're sticking with the blue kit again, and don't look to have made any significant changes this year - you can't go nuts every season. A good looking jersey and easy on the eye, and refreshing in the sea of mostly black jerseys that seem to be dominating the sport this season. 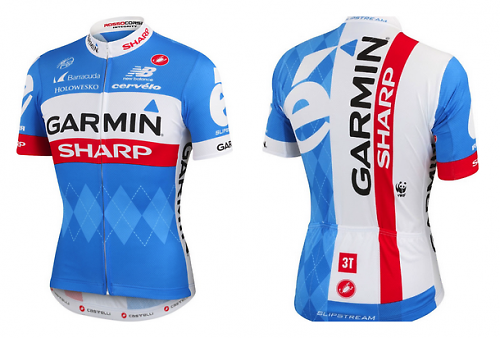 No major change for Garmin-Sharp. From the front it looks identical to last year, the same argyle on blue with white and red bands. The back has been totally revamped, however: a huge slab of white with vertical title sponsor logos and, if you squint closely, you'll spot the tiny World Wildlife Fund logo. Anyone remember Dan Martin being chased by a man dressed as a panda at Liege-Bastogne-Liege last year? 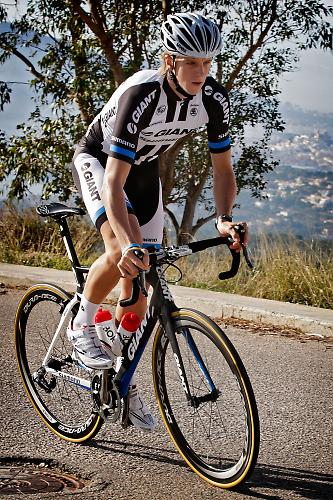 What can we say about the Giant-Shimano kit? The designer had a penchant for liquorice allsorts? Giant’s brand styling includes a lot of black, white and blue, and that is mirrored in the kit. There’s still time for it to grow on us. Howay the Toon! 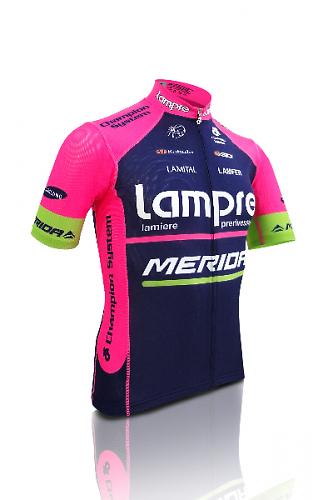 Who'd have thought that pink, green and blue would complement one another to make a beautiful jersey? No one, that's who... and they'd be right. Thankfully, the Lampre-Merida kit has been toned down just a bit for new season. Mind you, it's all relative. There’s more blue, now darker, and less fuschia, now relegated to the side panels, sleeves and shoulders, with a green stripe on the sleeve. The change makes it a little less shocking than the 2013 kit, which for many was the ugliest mashup of corporate colours in the peloton. A move in the right direction. 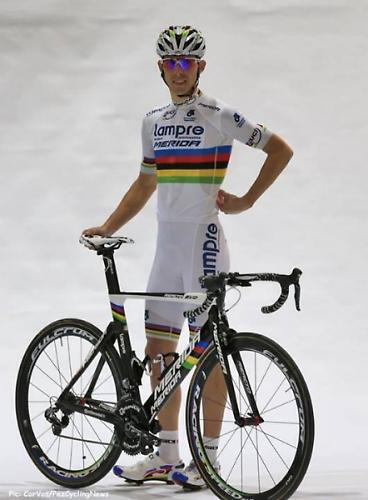 Lampre-Merida also have the world champion Rui Costa so they’ve produced a white jersey with the rainbow bands around the torso and on the sleeves. Unfortunately, it looks like Rui Costa will be donning matching white shorts for the season, with custom painted Sidi shoes and Merida to match. Let's hope it doesn't rain for the entire season, then. 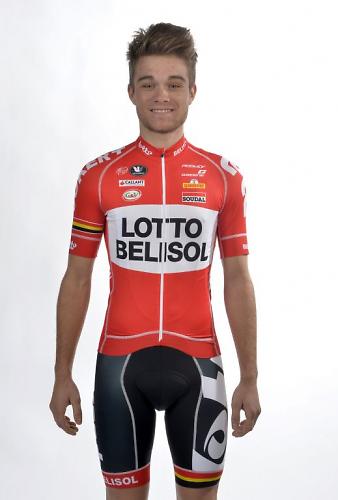 The most shocking change to the new season is Lotto-Belisol. The Belgian squad has ditched the white, blue and yellow design, and replaced it with an all-new red jersey and black shorts combination. We’re not sure what’s going on with the font used for the main logo across the chest panel though. Looks like the designer forgot to send the printer the font file. The team claims the new design celebrates “the 30 years of Lotto tradition in cycling with a basic retro look.” Hmm... The back of the jersey is very spartan with a lack of big logos, so should be easy to spot in the peloton. 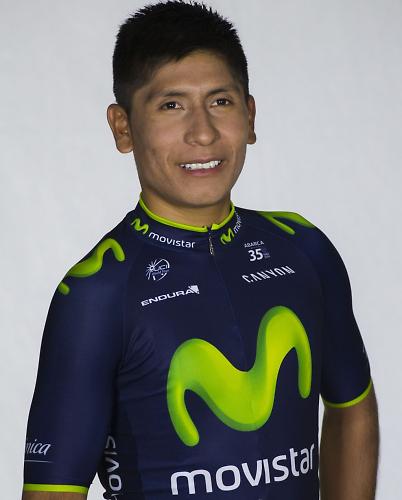 Despite a change of clothing manufacturer, there's little change in design for Spanish team Movistar. It's starting to look a little dated now, we reckon. The team enters its first year with Scottish clothing company Endura, who released details of the new kit a little while ago. They told us that they’ll be selling kit that is identical to the kit the team wear. They’ll be selling the full head-to-toe strip, and it’ll be available through its network of dealers. 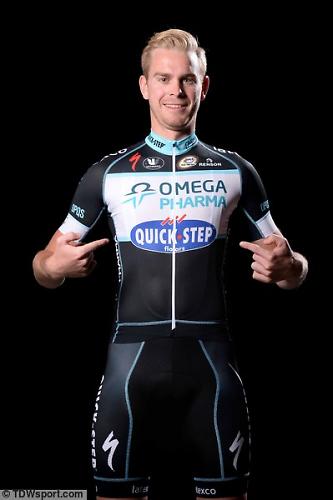 Mark Cavendish’s squad has been borrowing from the Team Sky paintbox this season, with a greater use of black on the jersey. They also dropped the gradient fade from the shoulders. I’m not sure it's an improvement. Black is slimming, right? 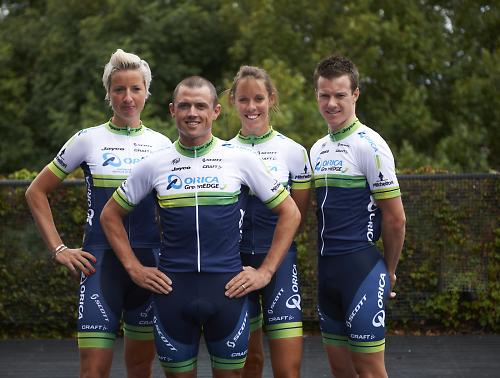 The Australian team has made a few tweaks to its kit, and it’s much cleaner and better looking for it. The most noticeable change is the tall green band has slimmed to a thin stripe, and it now sits higher up. It divides a large blue lower panel and white shoulders. It’s still identifiably Orica-GreenEDGE, even though the main logo is quite a bit smaller. Oooh, cheeky! Chris Froome caused a commotion on social media when he tweeted this photo of the new Rapha skinsuit. It's an extremely see-through fabric. Thank goodness for that modesty panel. Looks like they're making a short sleeve jersey from this fabric as well, which the Tour Down Under team have been spotted wearing. Here's the official photo of the new jersey. The design, in a way it has changed little, but one big change is the loss of the rider names from the side panels. They're now found on the arm sleeve, and the side panels are now filled with a 21st Century Fox logo, joining the one that appeared on the shorts last year. Jaguar has been given a spot on the front. Pin stripe suits, yes, but pin stripe cycling kit? That’s a new one on us. Trek have stepped up as the sole title sponsor with its Trek Factory Racing team this year, and thankfully that means the clash of Radioshack red and muted Leopard tones can no longer offend our eyes. The Trek kit is understated. Corporate? Plain? Boring? We can see it being a hit with fans though. And pin stripes are slimming, no? Spartacus looks a bit non-plussed by the whole thing though. 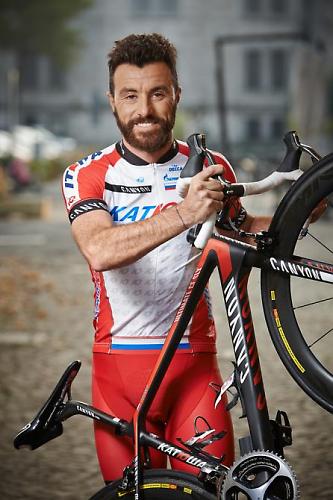 Remaining with red as the main colour, Katusha have added a large white chest panel to the kit this year, with ‘IO’, taken from the Katusha logo, repeated in lines across it. Not an improvement on the 2013 kit which was mostly red with a white band, or the 2011 kit with the city skyline printed across the chest, in my opinion. Something about this picture makes us think, 'The best a man can get'. 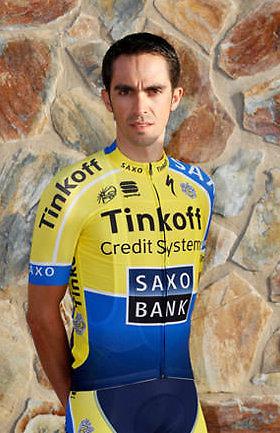 Mind your eyes! With Oleg Tinkov buying the team outright over the winter, the latest kit goes big with yellow, the corporate colour of Tinkov’s bank. Will it be the only yellow jersey that Alberto Contador wears this season? 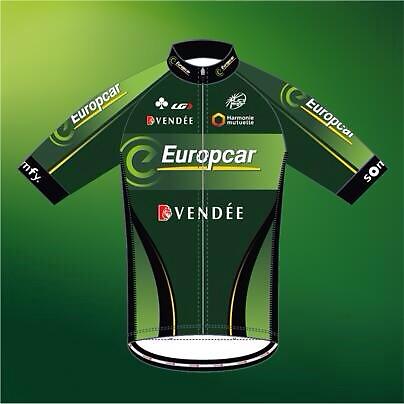 Little change for Europcar, it’s still an interesting shade of green. A bit less black in the side panels and a couple of black curved lines on the lower half are the main changes, otherwise it's business as usual.

There you go, the 18 WorldTour team jerseys. It's not a classic year for professional cycling team kit, but there are a couple of interesting designs.

Remember, the job of a team jersey is purely functional, to act as a platform for advertising sponsors, so it's a bit unfair of us to take the Mickey. That said, where's the fun in playing it straight all the time? With the constraints from corporate style guides that most big brands have, there's little scope for creative flair to show through. You don't get much more compromised than a trade jersey.

Which is your favourite? Let's hear it in the comments below.