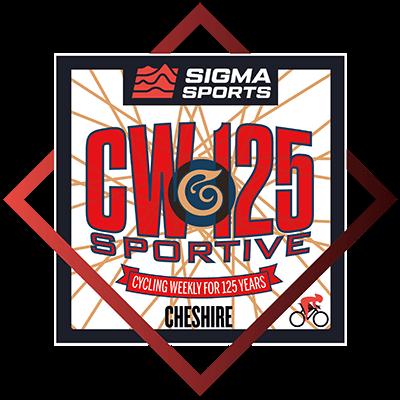 Cycling Weekly celebrated their 125th anniversary two years ago, with a 125-mile day in the saddle through the glorious Cheshire countryside. So successful was the event that we decided to give The Cycling Weekly 125 sportive a regular slot on our sportive calendar, joining up with the Sigma Sports Challenge Series. With an epic 23 per cent climb and a timed lap of the international Oulton Park Circuit among the route highlights it’s easy to see why!

Starting out at the revered Oulton Park Race Circuit you'll start off with an untimed lap of the circuit, which as well as easing you into the sportive gives you an opportunity to recce the circuit before that all-important timed lap.

Fresh off the track you are invited to explore rural Cheshire and some of the best scenery it has to offer. Epic riders start by heading north for a quick dip into Delamere Forest Park, while those who have opted to ride the Standard route continue west before heading south. Epic riders, in the meantime, continue their northern loop by zigzagging their way over and under railways and brooks.

The Epic route rejoins the Standard and Short route, for a time, and in unison are treated to a fleeting glimpse of Beeston Castle’s remains — shortly after which the course splits for a second time sending Epic riders further west to catch a glance of Wales over the River Dee.

From here riders start on an easterly tack passing through the pretty village of Audlem, then on up to Wybunbury. Soon after, the Short riders will veer off west to head for home, while the Standard and Epic riders continue towards their toughest challenge of the day, Mow Cop.

With just under a mile of continuous climbing, and the gradient incrementally increasing as you get closer to the top, this is not a climb to underestimate, so make sure you have sufficient fuel in the tank!

Just after the level crossing you will begin your ascent. Starting out with a fairly comfortable nine per cent average, the road soon ramps up to a cruel 20 per cent before easing off prior to the reaching the sharpest gradient of the climb. Now, with mind and body locked in battle, you must mine deep into your reserves as the road rises to 23 per cent. But with great physical exertion comes a steady flow of endorphins, and after all of your hard work you will be rewarded with views of the picturesque Mow Cop Castle and a wide-angle shot of the fantastic Staffordshire and Cheshire countryside.

As you head for home, all that climbing can only mean one white-knuckle descent down to Astbury, after which you'll continue to wind our way through Cheshire’s canal-bordered lanes. Closing in on the finish, after an Epic 125 miles, the Sigma Sports Cycling Weekly 125 Sportive will put you through your last test, an all-out sprint to the finish line via a timed lap of Oulton Park circuit.